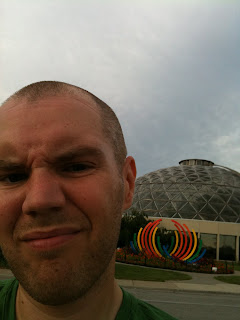 Behind that homely unshaven mug is the geodesic goodness known as the Des Moines Botanical Center. Thank you, R. Buckminster "Any Relation To Steve?" Fuller.
Posted by Jason T. Nunemaker at 7:27 AM 1 comment: 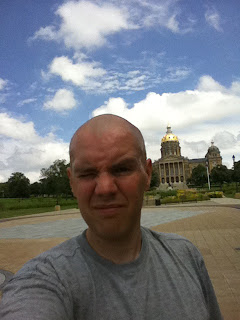 Captured on my homeward commute via the wacky front-facing camera on my (apparently defective, if you read Consumer Reports) iPhone 4.

Now that I see this photo big, I think I look kinda like a young, squinty, angry Bob Roll. So I guess that makes it a photo of "Day Moyne."
Posted by Jason T. Nunemaker at 10:29 PM 2 comments:

Ask Not For Whom The Recession Tolls

This one definitely earns the "things that suck" blog-search keyword.

I learned last week that it's highly likely (as in, almost certain) I'll be without a job by the end of the year. I make it a policy to keep my employer out of my blog (because, ironically enough, I didn't want to get fired), but If you watch the news, you can probably figure out where I work and/or worked. If you deduce it, I'd ask that you not mention it in the comments section -- even though they can't downsize me any more than they already intend to, I still have some things left to lose before I take the walk of shame with my stuff in a box.

I'm not whining, and I'm not desperate (yet) -- I did some good work, got some good experience, and at least I have some amorphous amount of time before the axe actually comes down. But the whole thing just leaves me kind of deflated.

Being me, my immediate reaction was to go for a ride, which was a good call. I swear, the sound of my good bike on smooth pavement at 18-20 mph would make an amazing white noise machine. That hum triggers the happy place in some reptilian corner of my brain, even when the higher functions are in four-alarm freakout.

So, dear readers, if you just happen to know someone who needs a freelance sentence-assembler (preferably in the bike industry, as that would pretty much be my dream gig), you know where to find me.


Now that I've had my vent, I'll keep the buzzkill off the blog, promise.
Posted by Jason T. Nunemaker at 4:38 PM 2 comments:

Went Down To The Crossroads

We're in recovery here at The Cycle World Headquarters, enjoying "Independence From Work" Day after a weekend at the 80-35 Music Festival. While this isn't a music blog per se, it does host the rantings of a rabid pro-Des Moineser (namely me), so I'm giving myself an off-topic pass on this one.

80-35 (named for the two interstates that converge here) is an annual outdoor music festival put on by the Greater Des Moines Music Coalition that pretty much takes over the west end of downtown Des Moines for 48 hours. There was some hullabaloo this year since we got a new sculpture garden right where the main stage used to be, but the organizers were able to keep the festival downtown (where it belongs, if you ask me), sticking the main stage right behind our controversially cool library in the shadow of our most-recognizable building, 801 Grand. In addition to the (paid) main stage, several smaller free stages host non-stop acts of all sorts.

The first thing I really like about 80-35 is that I always get exposed to bands that a) I've never heard of before (because I live under a rock, musically speaking), and b) I want to hear again. This year was no different. Here are some of my top "unknown to me "picks, in no particular order:
Having mentioned that the music is the first thing I liked, here's my second: Des Moines, Iowa being PROUD of being Des Moines, Iowa. I've lived in some cities with a serious self-esteem problem -- I'm looking at you, Columbus OH, motto: "If only we had a professional sports team..." When I moved to Des Moines ten years ago, it was suffering the same low self-opinion. Not any more. I lost track of the number of hilariously-self-effacing-yet-proud t-shirts I saw from local success story Raygun. Some of my favorites:
You get the idea. We like it here. We know what you think of us, and we don't particularly care. We'll even get a good laugh out of it. It's a feeling that's been growing for a while now, but events like 80-35 really bring it out. Maybe I was sampling a bit too much of the (Iowa-made) Olde Main Brewing Co. beer (good beer? at an outdoor music festival? seriously?), but I just got this surprised-yet-exuberant group-feeling all weekend. It was like we all wanted to congratulate ourselves and remind the rest of the world that yes, cool stuff like this really happens here.

Yes, dear reader, you can give me a "Finally! Gosh!" (in your best Napoleon Dynamite voice) now. It's the long-awaited Xootr Swift customization post. Break out your pocket of tots and get comfy.

Back when the Swift was just a gleam in my eye, I had some ideas about how I would tweak one to make it uniquely mine. That should tell you a lot about me and my bike habits... even the ones I'm just thinking about owning in the distant future are already in the queue for my workstand. The actual bike thwarted some of those imagined customizations -- sometimes for the better, sometimes not.

So what did I actually change? Well, I always take the provided contact points (saddle, bars/grips and pedals) as little more than a manufacturer's suggestion, and the Swift was no different. The saddle was a bit squishy for my tastes (it's the newbie's paradox... the softest saddles can hurt the most) so it went to the parts box for something a little firmer, narrower and lighter. The stock pedals were swapped for some BMX platforms... not because the stock ones were bad (they're all metal and very nice, a big improvement over the usual OEM plastic disposables), just because I could. And I'm trying out some Ergon grips

(a sponsor of the great Kent P and his recent -- epic! -- Tour Divide ride) -- jury's still out there. Tack on a big saddlebag, a bottle cage, a bell, and some clip-on fenders, and it's a bike!

Oh, there was one other thing: theft resistance. Des Moines isn't exactly a hotbed of bike pilfering, but I always try to make sure my bike is a harder target than the one locked next to it. To that end, I replaced the wheel quick releases with hex-head skewers, and even went so far as to do the same with the three quick release binders (two at the seatpost and one at the stem riser) that accommodate the folding process. CAUTION: I do NOT know if Xootr would recommend that last bit. I just assumed that since the folding QRs looked like seat binders, I could replace them safely with non-QR seat binders. So far, it's working out fine. It does slow the folding process, but since I plan to use the fold as a fairly rare "take it on a trip/shove it in a trunk" feature rather than a part of my daily commute (more on that in a future post), I don't mind. 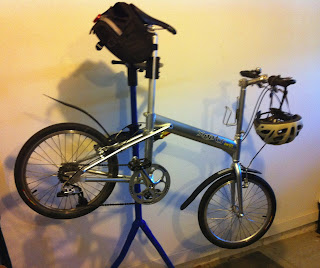 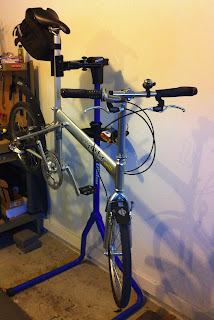 I like it! The bike, that is, not the crummy photography.
Posted by Jason T. Nunemaker at 2:00 PM No comments:

Captured at a favorite local restaurant: 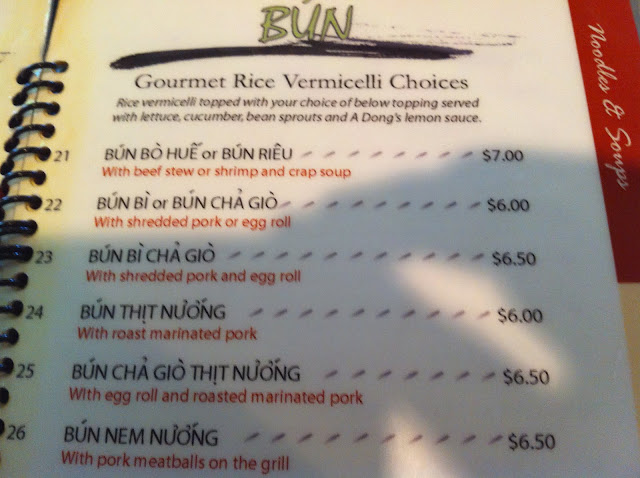 Imagined lament of puzzled restauranteur: "I wonder why nobody ever orders #21?"
Posted by Jason T. Nunemaker at 6:37 AM No comments: