One bad thing about being a cheap curmudgeon who no longer works in a bike shop is that I very rarely get to fondle all the new toys on the market. I read about them, sure, but my own fleet is (for the most part) stuck in a time warp out of the mid/late-90s, those halcyon days when anodized colors were cool and a 10-speed was a 70s dumpster relic, not an entire cassette and/or fodder for a "sweet fixie conversion."

Last Fall, however, I did a bit of a fleet shakeup here at The Cycle World Headquarters (you can read about it in the aptly-named post Fleet Shakeup at The Cycle World Headquarters) where I cast asunder my main retro-ish ride for a new Raleigh Clubman (a bit of a retro-ish ride in itself, but bear with me). As a result, I find myself adjusting to technologies that your average club-ride-Fred has taken for granted for over a decade. I'm like the Unfrozen Caveman Lawyer of bike tech.

One of the newfangled gadgets I'm learning on the Clubbie is the mystical STI shifter. Yes, I know, STI has been around since Rick Astley's pop chart heyday. I told you, I'm a Luddite geezer: 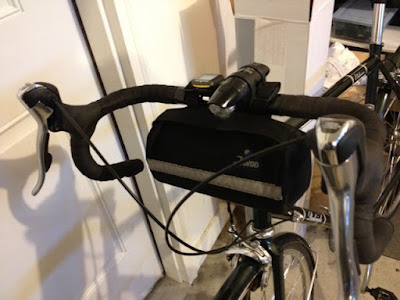 
The Clubster comes with Tiagra 9-speed and a Tiagra compact double up front. Just how curmudgeonly am I? I actually went hunting for the 2011 model because it only has a 9-speed cassette instead of 2012 Tiagra's 10-speed. And, gol-durn-it-all (that's curmudgeon-speak for "surprisingly"), I actually like it... with just a few reservations.

Shifting the rear is about as brainless as a shifting system gets. Push brake lever in, get an easier gear. Push inner lever, get a harder gear. The action is light but precise. You can grab a bunch of gears going lower, but higher is one at a time (though the action is quick enough to make this a theoretical quibble for me). Like a lot of Shimano stuff, the ergonomics are just ridiculously well done, so my hand is nicely supported and the buttons sit right where I'd expect them. I could do without the weird pointy-bulbous "Bullet Train" aesthetics of the front of the shifter, but oh well.

Front shifting is a bit less intuitive, though. Part of this can be attributed to the compact double; a 16-tooth jump (from 34 to 50 and vice-versa) is quite the leap, even with sculpted chainrings. The bigger issue is Shimano's continued insistence that front shifters have to index. Uh, why? It's a double. You got high, you got low. If you can't tell the two apart without a click, you might consider a less-challenging hobby (like "napping"). The workaround on this shifter is a trim position just inboard of the big-ring click... so I usually end up shifting across the entire travel to really lock it in on the big ring, then tapping the downshift button to find that trim spot and quiet chain rub.

Oh, and there are optical gear displays. I am contractually obligated to loathe these, but under duress, I will admit that I look at them sometimes. Sue me.

One thing I can't speak to yet -- and one major concern of the Cantankerous, Curmudgeonly Chorus -- is the long-term durability of STI. Since Tiagra is not exactly top-o-the-heap, I'll be interested to see how it holds up over the long haul. Right now, I only have about 400 fair-weather miles on these shifters, so I'll have to report back. I don't subscribe to the Chicken Little school of, "Tiny, fragile parts! No friction option!" If a shifter fails catastrophically (and really, how often does that happen?), you deal. Get off the bike, find one good gear by hand (like in days of yore), and keep riding.

So, low-miles impression: The ergonomics have sucked me in, the mechanicals  work like Shimano (maybe not perfect, but predictable and effective), and the jury's still out on reliability. We'll see after a few more digits tick over on the odometer.
Posted by Jason T. Nunemaker at 8:37 PM 2 comments:

I tried to stir up a helmet kerfuffle a few posts ago, but to no avail. How do you know your blog is unpopular? When you can't even get a decent pro-/anti-helmet flame war going in your comments. But, undaunted, I will try yet again.

Usually, I take a pretty laid-back, semi-agnostic approach to what one wears upon one's melon while riding. I wear a helmet when I ride, and I ask that anyone on the back of my tandem do the same. Beyond that, what you do on your bike is like what you do in your bedroom: sweaty, marked by a lot of grunting, and none of my dang business.

My agnosticism collapses into pure zealotry on one point, however. If you ride around with your helmet hanging from your handlebars, I will harangue you relentlessly until I am out of earshot (which won't take long, because I'll be trying to ride away from you at my laughable excuse for top speed). Why? Because while I can see some validity to both the pro-helmet-on-head argument and the leave-helmet-at-home argument, there is absolutely NO rational reason for riding with a helmet hanging on your bars. You're still carrying the weight of the thing (albeit not on you), so it's no lighter. And what happens when (not if) the helmet falls off your bars into your front wheel? You're going down, and you're probably taking out several people around you... and the thing that would protect you in a crash is the thing that sent you over the bars in the first place. Irony, thy name is concussion caused by protective headgear.

So, do yourself and everyone riding with you a favor: Either wear the thing or don't. But don't use your bike as a rolling hat rack.
Posted by Jason T. Nunemaker at 7:24 PM 7 comments: