Ready for my closeup.

I bought one of those cheap “ring lights” in a vain (in more ways than one) attempt to look less homely on video calls for work. Of course, it failed miserably at that task - a few bucks worth of plastic and LEDs can’t work miracles - but as I studied the mounting clip, I was struck by an idea: 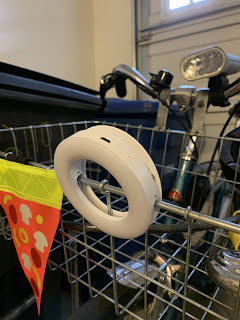 No clue how well the clip will hold up over bumps, how many lumens this bad boy puts out, or how long it will last on a full charge, but I figure it adds some visibility to my basketed steed as a supplement to my “real” light, and what else was I going to do with it?

For the beam nerds, here’s what it looks like lit up in my garage: 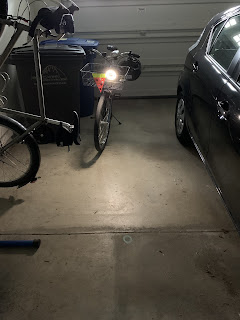 The first bike shop I worked in was just a corner of a hardware store. Our clientele wasn't particularly interested in the minutiae of tubing butt profiles, chromoly versus aluminum, Shimano's complex and arcane product hierarchy, and the like. So I learned quickly to point out visible differences between different bike models that would justify the difference in price from one to the next.

One easy marker (at least in the late 1980s) was wheel retention: the cheapest bikes had bolt-on wheels front and rear. Spend a little more, and you'd get a quick-release front wheel - which could be sold as "easy to remove so you can fit the bike in your car." Another rung up the price ladder got you quick-releases front and rear, which made flat repair so much easier - a dubious value proposition when most people brought their bikes to us to fix their flats, but at least it was a visible thing I could point to.

For those who weren't impressed with wheel retention, I'd turn to pedals. The cheapest bikes had all-plastic pedals. Further up the line, you'd get plastic bodies with metal cages. And the good bikes would have pedals with both metal bodies and metal cages. Now that we're in an era where all bikes either come without pedals (under the assumption that the buyer will add their own favorite model of clipless pedal) or come with those cheap, all-plastic pedals as test ride placeholders, it's hard to believe that pedals could actually be a selling point, but there you have it.

That formative experience has left me as a bit of a metal-pedal snob, though. So it's a bit surprising that my main steed is now wearing these: 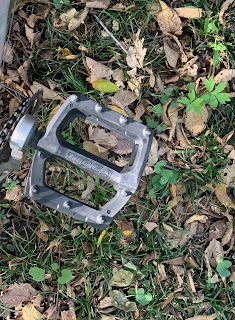 What can I say? The supply chains are weird these days, I'm a cheapskate, and I wanted something big, thin, light, and concave, so I put aside my anti-plastic bias and gave these Tioga Surefoot Slims a shot since they seemed to tick all the right boxes on paper. Too soon to give a full, definitive review, but I like them after a few rides. We'll see how they hold up after a few months under my paddle-feet.

Posted by Jason T. Nunemaker at 7:52 PM No comments:

The best Shimano cantilever brake that Shimano never made.

I know that declaring the "best cantilever brake" in 2021 is not unlike announcing the best dirigible (insert "oh, the humanity!" joke here, unless 84 years later is still "too soon" for that), but I'm going to yet again make a bold-yet-outdated pronouncement and call this the BEST CANTILEVER BRAKE EVER: 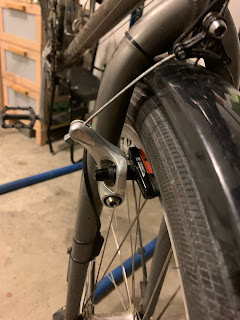 What you're seeing is a Shimano BR-M550 (a.k.a. Deore LX) brake (or more accurately, half of it) from the early 1990s, brought out of the Age of Grunge with some modern brake pads (the modern-ish straddle hanger is just there because I was too lazy to put something else in its place). So what makes this thing so great, you ask? (Humor me and ask, or I'll just pretend you did.) 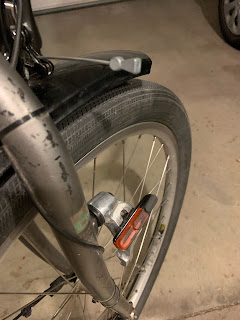 Shimano has tried to recapture and improve upon the 550 magic a few times in the three decades hence, most recently with a couple (now discontinued) CX-series models, although those used yet another oddball style of pad mounting hardware. So if you want the good stuff, head (safely, please) down to the local bike co-op and dig through the boxes for some crusty cantilevers of yesteryear.
Posted by Jason T. Nunemaker at 10:44 AM No comments:

Yep, back like a bad check. Because nothing's more timely and cutting-edge in 2021 than... a blog. (I considered TikTok, but if you've seen me dance, you know that's a terrible idea.)

Rather than offer a tiresome explanation of where I've been and what I've been up to (because I think we can all agree that nobody needs a rehash of the last few years), I'm just going to try to pick up where I left off, boring all six of you with my increasingly outdated and curmudgeonly look at obscure bits of bike stuff. In short, I'll be writing about things that entertain me, and if I happen to entertain or inform you along the way, well, that's just grand.

All good? Then buckle up, because it's going to be a yawn-inducing ride.

Posted by Jason T. Nunemaker at 8:20 PM No comments: