I Oughta Be In Pictures

Time to bring a little cheer back to the joint. See, I got a letter from Wilson the Elder Nephew, Finest Elder Nephew in All the Land. On the back of his eloquent epistle, the budding scribe sketched the following: 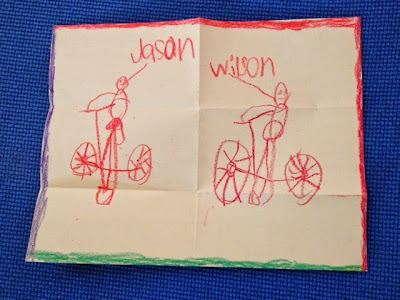 Just shy of seven years old, and the kid gets me. He really gets me.

As soon as I finish answering the letter, this baby's getting framed.
Posted by Jason T. Nunemaker at 8:11 PM 1 comment:

A Gap In The Skyline 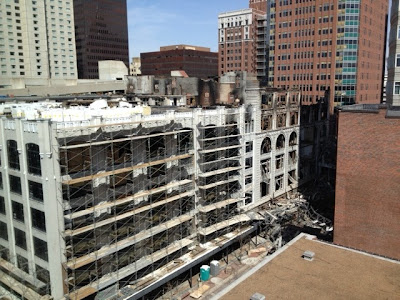 I hate to follow (a lame attempt at) humor with a bummer, but sometimes, that's how life works.

What you're seeing is what's left of the Younkers building, a Des Moines fixture since 1899, its upper floors abandoned by a corporate downsizing (despicable euphemism) in 2002, its lower floors left empty in 2005 with the closing of its namesake department store. For years, ideas for bringing the buiding back to life were tossed around, but only recently had a developer stepped up to make an idea stick. Sadly, the building was gutted by fire on Saturday, just as the renovations seemed to be taking shape. No one was hurt, thankfully, including the brave (jeez, talk about an understatement) members of the Des Moines Fire Department who just made it out before the upper floors collapsed.

(As much as I hate to admit it, The Des Moines Register is doing a pretty good job covering this story if you want to learn more. I can't get behind their Gannett parent's crappy "new and improved" website design,though.)

If I sound like I'm taking this maybe a little too personally, I am. See that extra-charred section at the far end? That was my office, circa 2000-2002 (actually, I was in a small cube farm behind those arched windows right below the worst of the damage). It wasn't a great job, but it was my first "grown-up" job (where they actually paid me to be a writer, albeit one who only wrote ads for khakis), and more importantly, it was what brought me and my lovely wife to Des Moines -- a town that I've since adopted as my own. I didn't know it at the time (because you never know these moments as they're happening), but that move and that "meh" job in a cubicle in that old building marked a huge turning point toward who I am today.

I Got A Recumbent!

Breaking news here at The Cycle! I have finally succumbed to the peer pressure of two vocal Steves from the comments section and dabbled in recumbency. If you came here for saddle reviews, look elsewhere. However, if you're searching for beard grooming tips, watch for my upcoming "Supine and Hirsute" series where I will test a variety of facial hair configurations for aerodynamic efficiency.

Being a respected professional cycling blogger, I didn't just get my hands on any old recumbent. It turns out that those crafty Swedes at IKEA have been running a top-secret Skünkwerks lab, crafting a line of bikes that are poised to revolutionize cycling as we know it. While they've done a fine job keeping this project away from the prying eyes of those chumps at Bicycling and VeloNews, regular readers of The Cycle know that they couldn't put one over on yours truly. I was on to this project from day one, from my team coverage of their radical Y-frame mountain bike with co-blog-sleuth fivetoedsloth to their carbon fiber track bike for juniors.

When it came time to release the IKEA recumbent, they wisely decided to work with The Cycle and allowed us to be the first journalists in the world to put this machine through its paces. At 12:01 a.m. today, a yellow-and-blue armored car appeared at The Cycle World Headquarters, driven by none other than legendary retired Swedish professional cyclist (and unit of measure) Magnus Bäckstedt. He unloaded a large, flat-packed (what else?) cardboard box, and was gone.

As much as I'd like to tell you how the bike rode, the fact that it arrived some-assembly-required has us a bit thwarted. Granted, like the Alex Pong/Cannondale/Magic Motorcycle concept bike before it, the IKEA recumbent can be built with just one hex wrench, thoughtfully provided by IKEA in the box (little-known fact: The failure of the Pong/C'dale/Magic Motorcycle bike was the result of a cost-cutting decision to NOT include the hex wrench). However, like most recumbents, getting the IKEA 'bent into a regular workstand can be a bit of a challenge: 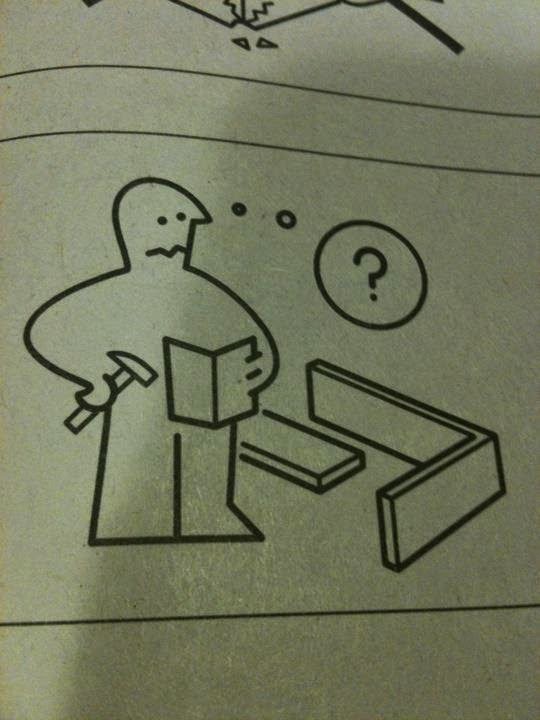 So until they can send me a Snärglöd adaptor, you'll just have to be satisfied with this teaser shot of the seat: 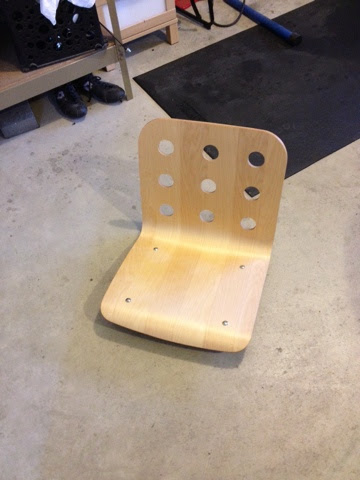 I can already tell that it's going to be laterally stiff and vertically com-plywood.
Posted by Jason T. Nunemaker at 12:30 AM No comments: