On Trickle-Down Technologies And Canaries In The Coal Mine

As a self-proclaimed Luddite, I set myself up to be ignored. A lot. "Oh, there goes Old Man Nunemaker again, blathering on about how back in the day, they only had 6-speed freewheels and thumbshifters and rigid forks. Somebody distract him with an episode of Matlock to shut him up."

And yes, I am guilty of wearing my sunglasses with the rose-colored lens of nostalgia. It's one of the hazards of being human. I forget that the motor powering the bike was a lot younger and a lot stronger back in the day, so maybe it wasn't the equipment of the late 80s and early 90s that made the riding so much fun.

Still, as the big players continue to escalate the arms race of more cogs crammed into a cassette, electronic controls, carbon everything, and disc-brake-only frames, I worry that the trickle-down "ride the same stuff as the pros!" mentality is going to leave the Luddites in the lurch. For those of us who don't  want to ride the same stuff as the pros, what choices will we have?

The N=N+1 race in rear cogs has been going on so long that I've learned to live with it. Plus, the big players have (for the most part) continued to support the "outdated" standards. I don't like 5- or 6-speed freewheels, but if I did, I could get them. 7- or 8-speed cassettes? Sure. Chains? No problem. But unfortunately, as the old standards become the stuff of department store junk, the shifters that go with them go as well. Want a really well made 7-speed shifter? Better hope somebody has new-old stock on eBay, because current production is probably made for a bicycle-shaped object from one of the dash-mart (K- or Wal-) stores.

What really gets my chamois in a twist, though, is the way electronic shifting and disc brakes may change the way frames are made as they trickle their way down from "pro-level" to "everybody else." Take discs. First, you have to add the caliper mounts. Ugly, sure, but tolerable. And maybe manufacturers will keep making frames with the option to mount other brake styles (though I kinda doubt it, since it would cost more). But having those disc caliper mounts means you also need to beef up your stays and forks to handle the load of a disc brake, which changes the way the bike feels, discs or no discs. As an admitted princess-and-the-pea rider, it's a tradeoff I'd rather not live with.

Electronic shifting could have the same impact. Lots of new (and high-end, admittedly) frames are now coming "optimized" for electronics: No cable stops or guides, just entry and exit ports for a little wire. Now, I don't know if electronics will ever get cheap enough to trickle down... but if they do, and if "electronic-specific" frames become the rule, what's left for those of us who don't want to rely on a battery to run our drivetrains?

Admittedly, the picture isn't quite as bleak as I make it out to be. Between the interweb as a seemingly bottomless source of old and obscure parts and the increasing niche-ification of the sport cranking out kit to support all sorts of weirdos, I'm guessing the Luddites will do just fine. And even if the big boys stop making the frames we want, there are plenty of  small companies looking for unique markets, not to mention custom framebuilders more than happy to turn an idea into metal.

Now, if you'll excuse me, there are some darn kids on my lawn, and Matlock is about to start...
Posted by Jason T. Nunemaker at 8:03 PM 2 comments:

With the year drawing to a close, it's time to scroll back through 2013 and compile my list of new stuff that I tried out and deemed lacking in suckitude.

Because I only try new saddles during years that end with a number, I put yet another new perch under my bum in 2013, the Terry Fly, in its less-expensive chromoly railway:

My first impression of the Fly (after setting it up level like I do with my other saddles) was a definitive "uh, no thank you." Without getting too graphic, let's just say that it almost immediately caused the (ahem) "condition" that it purports to cure. And lo, my nether regions were greatly displeased.

I am nothing if not stubborn, however, so I did a bit of reading on the Internets and learned that many folks get on better with the Fly if the nose is angled ever so slightly up. I did exactly that, and presto: Disappearing saddle. Seriously. I didn't give it a second thought from that day forward. Long rides, short rides, rides in Lycra, rides in baggy shorts, rides in jeans (JEANS, for Pete's sake!)... the saddle was simply a non-thing. I think that's why I haven't mentioned it here until now. I forgot about it.

The hole is weird, yes. And I have no idea if it's working any magic with the blood flow in the land down under. Frankly, I don't care. It's just comfortable.

(Interesting side note about the chromoly-rail model: The rails attach to little flexible "bridges" in the back rather than directly to the shell. It's hard to say whether that adds any comfort, though it should in theory. It does, however, provide a couple mounting points for the straps of a traditional saddlebag if you're so inclined.)

The Obligatory Disclaimer: I bought my saddle with pennies I saved from my paper route, and was not bribed or coerced to say nice things about it. If you go to that Amazon link and buy one, however, I'll make a cut on the deal. So there's that.
Posted by Jason T. Nunemaker at 8:05 PM 3 comments:

Yep, the geezer behind this blogular endeavor turned over another digit on the ol' odometer of life last week, proving yet again that Indiana Jones was right: It's not the years, it's the mileage.

Dear Mum sent me a little birthday package that included an Xfire tail light with frickin' laser beams so I can make my own bike lane wherever I go (Mum worries about her little boy's safety, and can't resist the oddest of bicycle gadgetry gifts). I'll review it eventually, but it was the other gift in the package (something she "just happened to find while going through boxes") that made me even happier: 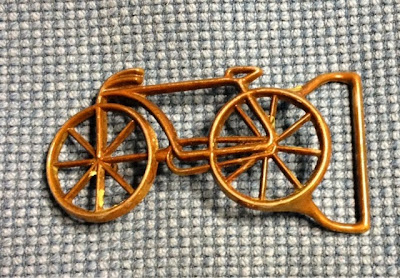 If this were just a bicycle belt buckle, meh. I'm not the sort who feels the need to collect random stuff that just happens to have bikes on it (insert nightmare vision of being crushed to death under an avalanche of bicycle knick-knacks here). But this belt buckle belonged to my late Grandpa N, who was an absolute biking fiend. Since I love the photo in that linked post, let's put it up again:

So the belt buckle: Not just any old bicycle knick-knack. He WORE that thing. Daily. He's probably wearing it in that photo. I don't think he was allowed to wear it to church, but if he wasn't in his Sunday clothes, that brass bicycle was probably keeping his pants up. My lousy photography doesn't show it, but the brass has the patina to back up my story. Sure, you can go to the hardware store and buy any number of faucets and light fixtures in brand-new, fake aged brass, but this is some AGED brass, with a little bit of blue-green in the crevices to show off its copper content (appropriate for a guy who made his living stringing copper wires).

I can't decide if I want to actually use it myself (adding my own patina, I suppose) or display it, but for now, I'm just happy to turn it over in my hands and remember the man who wore it.
Posted by Jason T. Nunemaker at 8:27 PM 1 comment: