Taking It To The Streets 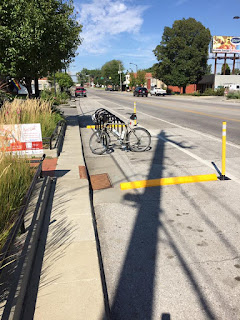 Believe it or not, that is a former car parking spot not far from The Cycle World Headquarters that has been staked out as dedicated, protected, on-street bicycle parking. Not only that, there are several of these bad boys in front of local businesses on a strip that already features dedicated bike lanes. It ain't the Netherlands, but I'm down. Heck, I parked there (that's the ol' Rockhopper at the hitching post) even though I was going to the store next door that had its own bike rack. Don't want to give the anti-bike crowd any "that was a waste of space no one uses" ammunition.

It's just further proof that this sign in front of local snarky t-shirt purveyor Raygun is oh-so-true: 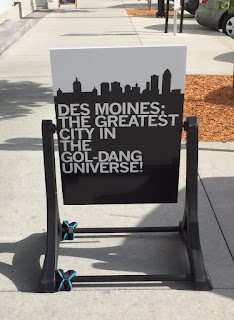 Posted by Jason T. Nunemaker at 5:00 PM No comments:

It was a "thing" back in the 90s amongst the MTB set (at least where I was from) to adorn one's bike with some kind of little trinket/figurine. Usually known as a "mojo", these decorations were part good luck charm, part bike personalization, and usually all silly. The most extreme example was pro downhiller Missy "The Missle" Giove, known for (among other things) wearing the body of her dead pet piranha around her neck during races.

Being far less EXTREME (dude!) than Ms. Missle, I never took the concept to the point of wearing dead pets. However, even now, the bikes in my garage each have a little extra personality added on in the form of a mojo. First up, Dear Spouse's single bike: 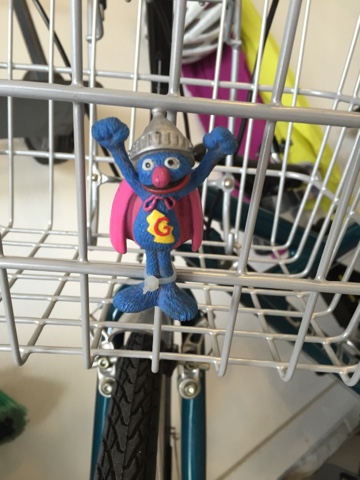 Nothing beats a basket for sheer mojo-attachment possibilities. She could have an entire army of Muppets up there, but chooses just one, her personal Spirit Muppet, Super Grover, positioned front and center where he can offer his trademark "Hello, everybody!" greeting to all he encounters. (For the safety enforcers, note that he even wears a helmet.)

My daily driver/commute beast Cannondale (a.k.a. The Red Sled) has a less risk-averse passenger: 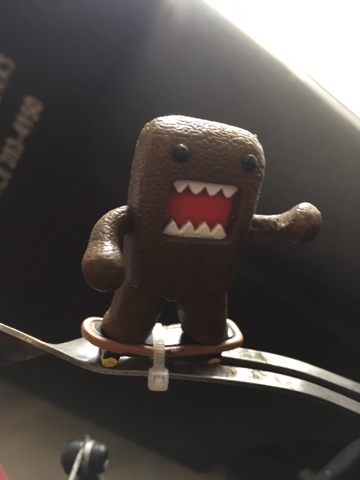 That radical dude is Domo, which I honestly know nothing about, but Wikipedia tells me he's the mascot of Japan's public broadcast TV station. Who knew? I just found him amusing, and the curve of my rear rack strut seemed like an ideal skateboard ramp.

Last but certainly not least, the mojo I'm most proud of rides along on the tandem: 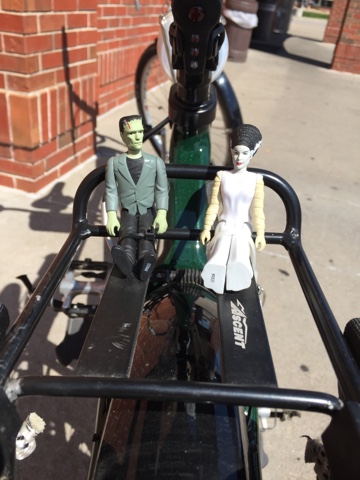 Obviously, a two-seat bike needs a his-and-hers mojo. When the two-seater in question is green, named Frank, and was brought to life thanks to parts from several other tandems, that mojo pretty much chooses itself. Plus, the captain of said two-seater has a few nice scars from his aftermarket femur. (And yes, I did intentionally choose zip-ties to match each figure, because I have a problem.)

Which brings me to the CRUCIAL point of the mojo: If you have a problem with zip-ties, a mojo may not be for you. I'm convinced that artful zip-tying is the basis of all good mojo installation. So if your bike needs a personal touch and you don't mind tying one on, give a mojo a try! (And if you have a good one, send it my way. Maybe I'll feature it as a traveling exhibit in my mini mojo museum.)
Posted by Jason T. Nunemaker at 3:10 PM 4 comments: