Drat, another hiatus. I would say this one isn't my fault, but it turns out my supposedly terrible internet service was actually traced to my own faulty grunge-era power strip that was causing the modem to have a fit. Live and learn.

So, on to the Bicycles of the Holy Land! Here, peering from the foliage near our host's home in Jerusalem, is what I believe to be the ubiquitous bike of at least the urban areas we visited: 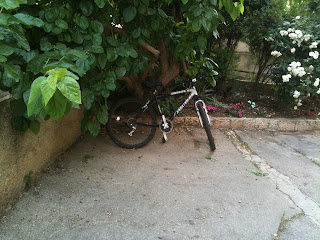 Be still my beating heart, it's a Bicycle-Shaped Object with 26" (a.k.a. 559mm bead-seat diameter) wheels. These things were all over the place, just like they are in pretty much any other city I've visited from New York to the mean streets of Cedar Rapids. It could pass in just about any dash-mart (Wal-, K-, Mega-) store in the U.S. without causing the slightest kerfuffle among the Huffies and Magnas. My guess is that it speaks Chinese just like they do, so there wouldn't even be a language barrier.

As a fan of model names, however, the Jaguar brand shown was one of my favorites. It seems like their strategy was to pick random names of U.S. states to identify their models. Shown here is an Oregon, but I also saw Texas, Colorado, and -- I think -- Wyoming. Even under close inspection, I couldn't see what made the different states any different. They all seemed to feature the same cheap Shimano parts and low-budget front suspension. Maybe the model names just denoted different paint jobs. Or maybe the really nice models were the states I never saw. I'm sure the Iowa is a fine specimen of mountain bikery.

As long as I'm on the name theme, here's another favorite brand that was almost as ubiquitous as Jaguar: 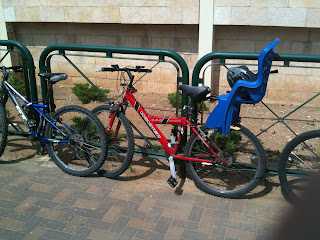 Too bad their English translator chose the noun over the verb, or they could go after Charlie Sheen for trademark infringement. I never determined if these bikes had any relation to the equally ubiquitous "Winner!" stands where you could buy lottery tickets -- recognizable by their freaky grimacing lottery ball mascots: 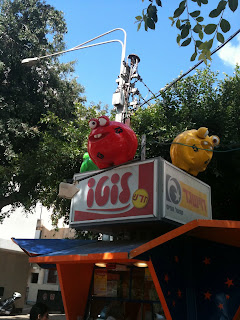 Being vaguely serious for a moment, as someone who's hopelessly stuck in the 90s, it warmed the cockles of my spleen to see that there is still a place where the 26" wheel reigns supreme. Even the "serious" bikers I saw on non-BSOs I saw were rolling on the five-five-nine, astride hardtails that I would have coveted greatly back in the aforementioned grunge era. 700c was way underrepresented in both its roadie and 29er incarnations, and I think I saw MAYBE two bikes that I'd consider hipsterish fixies over the course of ten days.

So what slotted in behind the 559 hardtail as the runner-up bike configuration? The folder, of course! 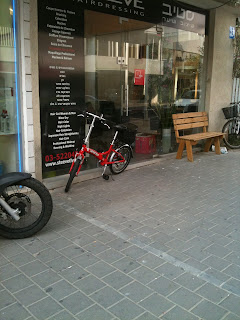 Methinks the Dahon patent has expired (or those crafty Dahonites are rebadging like maniacs), because I saw more bikes built around some generation/variation of the Dahon hinge than I ever thought possible. Your folder pilot was typically what I call a "person on a bike" rather than a "biker" -- he/she was obviously just a regular dude/dudette getting somewhere in the most efficient way possible, not a person trying to being seen on a lifestyle accessory.

Anywho, those were the ordinary (or quasi-ordinary) bikes our intrepid staff spotted on our pilgrimage through Israel. Next up will be the freaks -- cargo-hauling choppers, rental e-bikes, and (brace yourself) a camel on a tandem. Yes, you read that right.
Posted by Jason T. Nunemaker at 10:05 PM 2 comments:

For those not fluent in the language of the Chosen Folks, that's a transliteration of the Hebrew word for bicycle -- which will serve as a flag for all posts about our staff's recent trip to the other side of the planet.

However, since my teaser post started with scooter flash mobs, I'll follow my own random self-imposed order and start out with a post entirely lacking in ofana'eem content. Here in the States, the cyclist may be the renegade scofflaw of the streets, but in Israel (or at least on the streets of Jerusalem, Haifa and Tel Aviv) that role seems to be taken by the scooter driver/pilot/psycho. 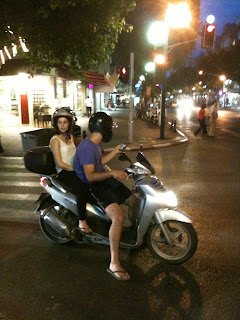 These bleating little buggers were EVERYWHERE. Solo dudes, solo women, mixed doubles (as pictured), two guys, laden with cargo, whatever... and always running with the throttle wide open, slipping through gaps in traffic with inches to spare.When I thought about the "scooter culture" (quotes intentional) back home -- which seems to be made up of aging hipsters pretending to be bad-ass mod kids from the 50s -- I had to laugh. In Israel, your average takeout delivery guy pulled stuff that would make our scooteur poseurs soil their vintage denim.

Note also the paradoxical approach to safety... the full-on motorcycle helmets paired with bare legs and -- yes -- flip-flops. You're seeing one at rest, but the flip-flop dangling inches from the pavement seemed to be a default pose whether the vehicle was still or traveling at 50 miles per hour (er, 80 kilometers per hour). I guess these guys don't hang out with the recumbent bike crowd and learn about leg suck.

The unspoken rule of the road pertaining to scooters seemed to be "if it can fit there, it can go there" -- which meant you had to sidestep impromptu scooter parking lots on sidewalks all over the place. Case in point, here's what appears to be the employee parking for some kind of delivery service: 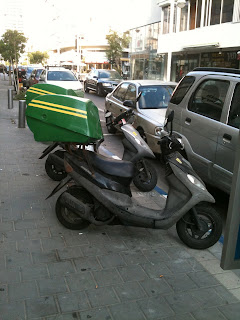 Now, I've ridden a loaded touring bike, and I've seen some cargo bikes in my day, but THAT is some epic portage. I hope these guys deliver styrofoam packing peanuts or something -- otherwise, their scooters would tip over backwards whenever they stepped off. The John Deere racing stripes on the cargo boxes are a nice touch, too.

Finally, there's the phenomenon I mentioned in my teaser, the scooter flash mob. Sadly, I was unable to capture this ballet of the streets on film (er, in pixels), so I'll have to use my words. Imagine you're riding in a taxi through a major metropolitan area. You arrive at a red light, first in the line of stopped cars. Curious as to the time, you glance down at your watch -- and when you look up, a crowd of six scooter ninjas has magically coalesced in front of your cab. The light turns green, and as quickly as they appeared, they're gone, with only the whine of their two-stroke hamster-wheel motors fading in the distance to indicate they'd ever been there in the first place.

As far as I can tell, it is accepted practice on a scooter to simply lane-split your way to the front of an intersection during a red light, meet up there with your other scooter buddies, and tear off when the light turns green. Cars seem oblivious to this little dance -- rightfully so, as it doesn't impede traffic in any way. But man, imagine if you tried to pull something like that here in the States. On a scooter, maybe you'd have half a chance to escape. On a bike, you'd be run down (literally) in a half a block by some arrogant, "how dare you get in front of me?" driver. But on the streets of the Israeli cities I visited, drivers took this behavior as normal and didn't give it a second thought. It was an interesting study in how the shared social space of the road is constructed... sure, there are the written rules, but we also have huge amounts of unspoken cultural expectations. Play along and you'll do fine. Bring the wrong social toolkit to the road (like I would have if I'd tried to bike or drive in Israel) and you'll have trouble.
Posted by Jason T. Nunemaker at 9:14 AM 4 comments:

Dang, now THAT was a hiatus.

Sincere apologies, dear reader(s). The intrepid staff here at The Cycle just got back from a big trip to Israel. Couldn't quite get that whole Middle East peace thing worked out in only ten days, but as a consolation prize, I did collect all sorts of material (and my usual crappy photography) for impending blog posts once the jetlag wears off. Scooter flash mobs, the ubiquitous Israeli front bicycle basket, the Land that 29ers and Hipster Fixies Forgot, a real bike shop in a mall, crazed sidewalk cyclers, weird lowrider cargo bikes, you name it. In short, there should be a quasi-decent payoff for the long dry spell, assuming you think my blather is a payoff rather than a punishment.

As a double-super-extra bonus, there's one of our world-famous book reviews in the queue as soon as the jetlag wears off enough that I can actually read the book. Author Amy Snyder was kind enough to send along a review copy of her Race Across America chronicle Hell on Two Wheels. As fans of my Advertising and Review Policy know (c'mon, admit it, you know you love administrative minutiae), I don't review stuff I haven't read and/or used, so that splash of link juice is just a thank-ye-kindly to Ms. Snyder for sending the book. You'll get my real review once enough synapses are firing again.
Posted by Jason T. Nunemaker at 8:22 PM 1 comment: