Two Generations of Dads on Bikes

I may be the biggest bike nerd in my family, but I am by no means the first. So, in honor of the day Hallmark has decided is devoted to fathers, I thought I'd honor the (now both departed, sadly) Nunemaker men who came before me in the saddle.

I put this photo up a few posts ago with very little comment, just to say goodbye to my grandfather who had recently passed at the impressive age of 100. That's him, piloting a 1967 Schwinn De-Luxe Twinn tandem, with my grandmother bringing up the rear in the stoker's seat. They had a good group of friends who all rode tandems -- the photo comes from an article in the local paper (which called my hometown "Cycling City, U.S.A.") showing five tandems side-by-side. I remember my grandmother also having a single bike, but never my grandfather. When he rode, he rode with her. The mechanical odometer/speedometer on the bike only tracked total mileage to four digits, so when they turned over 9,999 miles, he took it apart and used a label maker to add a "1" in front of the fresh set of four zeroes. Not impressive enough? When they started to winter in Florida, they kept a second big Schwinn down south, and I believe that one also earned a manually-added fifth digit. My own first experience on a tandem was on the big blue '67 shown above, riding stoker behind my grandfather, then later captaining with my kid sister in the stoker seat. I can only hope that my own beloved stoker and I can put as many happy memories on our own two-seater as he and my grandmother did on theirs. 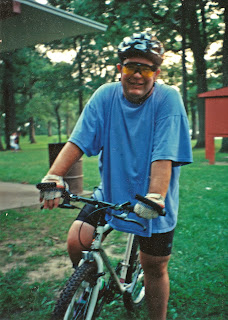 My dad came to biking later in life, after wasting most of the 80s with that whole running thing (what was up with that, anyway?) But when the mountain bike came along, he caught the bug. Not that he would ever be caught dead riding on a trail, mind you, but something about those chunky bikes with their fat tires really appealed to him (they appealed to me too, which is what kicked off my own obsession with this sport at an early age). Dad even came up with an idea for his own bike club on one of our many long summer evening rides together: the Fat, Tired Bike Club (with a very intentional comma between "Fat" and "Tired"). The idea was that the club would have a minimum weight limit: If you weighed less than the limit, it wasn't the club for you. He envisioned heavy guys (like himself) on big, fat tires, riding slow, stopping often for snacks, and generally having a hell of a good time (I suspect he would have gone absolutely nuts over the Surly Pugsley, had he lived to see its invention). That club never came into being, but he and a good friend did become charter members of their own Grumpy Old Bastards Bike Club (which even had a club sweatshirt). A heart attack took his life when he was only 54, but today, 12 years later, when I'm off on one of my meditative evening rides, I still see that guy from the photo, smiling and turning his pedals alongside me.

Whether you are a great dad, or had one, or just know one, happy Father's Day.
Posted by Jason T. Nunemaker at 3:42 PM 2 comments:

519 Miles On A Raleigh Clubman 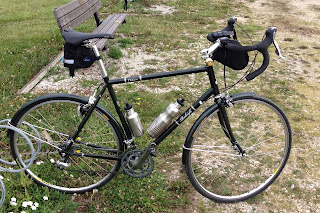 I call it "Green Bike at Rest".

Before you get all impressed, recall the Steven Wright joke where he encounters someone locking up a store with an "Open 24 Hours" sign, asks, "I thought you were open 24 hours?" and is told, "Not in a row!"

With that said, the fact that my long-term review of the Clubman is happening at 519 miles instead of 500 is actually telling. See, I left this morning with 460 miles on the odometer and thought, "I'll just knock off a low-key 40 so I can do a nice, round 500-mile review." Next thing I know, I'm at 519 and still feeling good. Need I say more? I will anyway.

The bike as shown has remarkably few modifications from stock, considering my relentless need to futz/inability to leave well enough alone:

Getting past the parts-and-accessories fetish, how does it ride? Quite nicely, as my "40 mile ride accidentally turned into 60" would attest. I'm hesitant to ascribe much ride comfort to the steel frame (too many reviewers fall into the "steel equals magic carpet" trap), especially when the ride personality was so transformed by something as simple as swapping one brand of inexpensive tire for another. However, my position on the bike (after the minor stem swap) is precisely where I want to be -- upright enough to make my old-man back/neck happy, but still low enough to get frisky when the need for speed calls. It feels like my old touring bike while looking like a go-fast bike (albeit a go-fast bike for an aging dandy). It's no uber-light carbon race-day steed, but hey, I'm no uber-light racer (though I am carbon-based). Stil, it has plenty of snap for my laughable attempts at speed without giving away any versatility to get there.

All bike reviews have to have their quibbles, though, and mine can be summed up in the f-word: fenders. Don't get me wrong, I am a HUGE fan of fendering (because, after all, it's probably urine). And the stock fenders on the Clubman tick all the right boxes: all metal, constructeur-style wrapover stays, rolled edges, and even a paint job to match the frame. However, those winning features are let down by the flexible steel L-brackets that attach the fenders to the fork crown and rear brake bridge. Those weak points allow both fenders to rattle over rough surfaces (the front against the fork blades, the rear against the seat tube). I've temp-fixed this with a couple decidedly low-rent rubber shims crammed into the offending rattle-spaces, but c'mon guys... if you're going to spec a bike with fenders (and props for that!), give it proper threaded bosses under the brake bridge and fork crown (or at least a daruma on the front brake bolt) to mount said fenders securely.

The fenders also appear to be a limiting factor in the tire size the bike can take. My 700x28 Continentals (which don't measure a true 700x28) are very tight to the fender edges despite the fact that there's still plenty of air under the brake and between the stays/fork blades. A slightly wider fender with small cutouts at the brake calipers would probably clear a true 28, if not more. When I was getting bashed around by the (greatly disliked) stock Vittorias, this was a big deal, but now that I have a nice 28 on there, I can't say that I want for too much more tire girth. Still, it would be nice to have the option.

What you're hearing, though, is the desperate cry of a man trying to sound objective about a bike that has him almost entirely smitten. In my 519 miles with Clubbie, I've pretended to be a go-fast racer-dork, commuted in the rain, hunted (and been hunted by) bike ninjas on night rides, cyclocross-portaged over downed trees, taken shortcuts on dirt (and sometimes mud) paths I had no business on, and even made attempts at gravel (albeit ones that would make true gravel-grinders say, "aw, isn't that cute!") The bike quickly went from a babied "new toy" to a dirty, indispensable companion, replacing a bike that I thought couldn't be replaced. I'm looking forward to the next 519 miles, and the 519 after that, and the 519 after that...
Posted by Jason T. Nunemaker at 3:00 PM 8 comments:

Charles Layton and Marion Nunemaker, my grandparents,
circa 1968, astride their '67 Schwinn De-Luxe Twinn tandem