Just a public service announcement, since the news tells me there's some dude named Francis hanging around 'murica this week: DO NOT LET HIM HAVE YOUR BIKE.

A Disturbance In The Force

Answering the question that absolutely no one was asking, why yes, you can buy a Huffy-made, Star Wars-themed fat "bike" from Target for the low, low price of three hundred dollars: 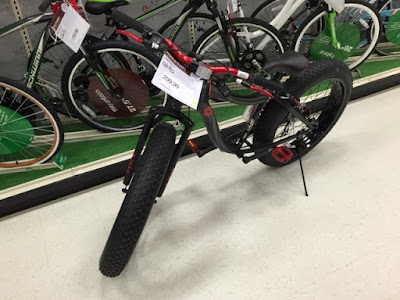 Or, if you aren't a fan of the Darth Vader colorway, you can be a stormtrooper instead: 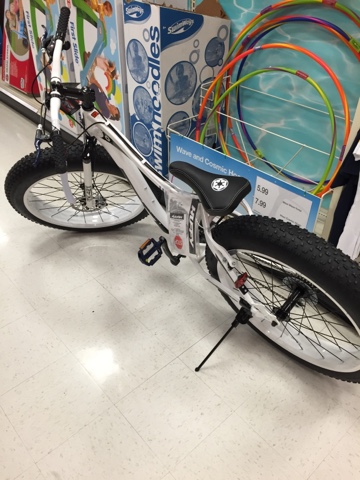 Now, I can't sit in my glass house and lob stones at the circa-2015 Star Wars cross-promotional marketing machine, seeing as I was the kid in 1977 who would plead with parents, grandparents, and random strangers to buy him absolutely anything that had Star Wars on it (and having soft, easily manipulated parents, I usually got it). But, um, wow.

I'm trying to grasp the logic of a front disc brake (likely cheap and cheesy) paired with a rear V-brake (also likely cheap and cheesy). But that's applying the mindset of a bike person to what is really a bike-shaped object/extremely large prize from the bottom of a cereal box. Here's an easy tipoff... if the "bike" you're looking at is within easy reach of a box of pool noodles (see second photo), you should look elsewhere.

(Aside: Just noticed the 27.5" mountain bike -- using the term loosely -- in the background of my first photo. So that marketing hooey has even made its way to the box stores. Calling Jan Heine, the 650B revolution has arrived, but you might want to be careful what you wish for.)

I will say that in the late-80s, my personal discovery of mountain biking had a reptilian-brain connection to the original Star Wars trilogy, as zipping through the woods on my first MTB was the closest I'd ever been to the Return of the Jedi speeder bike chase sequence. But if you want to have that kind of fun these days, I suspect that these Target fatties are not the bikes you're looking for.
Posted by Jason T. Nunemaker at 10:44 AM No comments:

How The Other Half Rolls

Many electrons are wasted around here on the bikes that yours truly, Grand Pooh-bah of The Cycle (the ugly dude in the photo to the right) rides, but it's been a while since I've featured the cycle stylings of my long-suffering spouse. Thus, I give you... the little Cannondale: 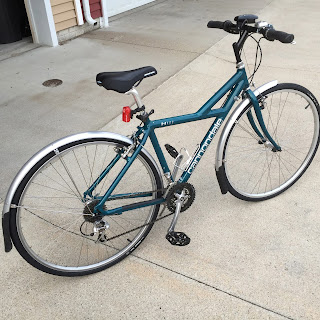 This is a v1.2 photo, after I'd already given it some love in the form of flat pedals (replacing clipless), new grips, new tires, new saddle, some lights, fenders, a bottle cage, and (of course) a bell. The previous owner had clearly ridden it a lot but taken good care of it -- all the things that are usually hurting on a 20-year-old bike (like those vintage Grip Shifts) were just fine.

This is a gen-yoo-wine Made in Bedford, Pennsylvania Cannondale from the mid-1990s, welded from big ol' aluminum tubes, natch. The thing I find neat about it from a bike-nerd perspective is that funky front end... on a mountain bike, Cannondale called that extra triangle the Killer V configuration. It was designed to provide more standover clearance, eventually to make space for a suspension fork, and generally, just to look cool. On a hybrid like this one, it doesn't get a snazzy marketing name, but it ticks the "standover clearance" and "looks cool" boxes, at least to my eye. Our tandem has a similar front end, and my delicate dangly bits appreciate it every time I have to stand over the big bike at a stop.

I toured the Cannondale factory as a Pennsylvania shop rat just before the turn of the century and was able to see how they could rapidly prototype oddball designs like this... draw it up in CAD in the morning, a computer-controlled laser cutter slices exactly the right miters into the right tubes, pass those tubes off to a welder, and by the end of the day, you have a rideable frame. If it doesn't work out, start over again tomorrow. It's a far cry from those "Designed" in the U.S.A. companies (including the Cannondale of today) who have to send their blueprints overseas and wait for the shipping container to bring the results across an ocean.

(Ranty aside: If it seems like I kinda talk about Cannondale in the past tense, that's how I see them after Dorel shut down Bedford. As far as I'm concerned, if it didn't come out of Pennsylvania, it ain't a Cannondale. Neener neener neener.)

But enough harumphing, and back to the bike at hand. Here's some action-shot proof that my tandem stoker does more than just stoke tandem (at least until she sees that I've put a slightly silly picture of her on the blog and tells me I have to take it down): 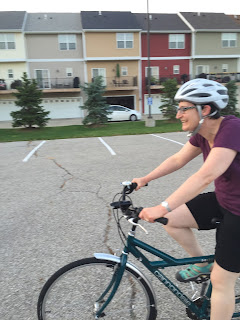 This is v2.0, after she determined that the reach to the stock flat bars was a bit too much Swapped those out for some inexpensive riser bars with some sweep, and the smile tells you the verdict. (Apologies to the bike photo nerds for not capturing the drive side of the bike, or the bike in its entirety... when you're being buzzed by a crazy woman in a parking lot, you take what you can get.)

Perfection was not attained, however, until v2.1, with the addition of a key accessory: 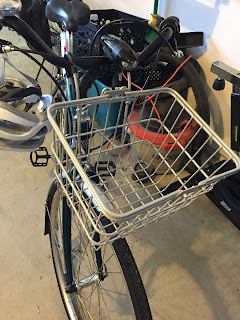 Big ol' basket? Check. The bike's now functional, and just as stylish as its pilot.

(If you were sucked into the Cannondale company/history nerdery above, http://www.vintagecannondale.com is a great resource, with a catalog archive going all the way back to 1973 when they only made backpacks, bike touring bags, and bike trailers.)
Posted by Jason T. Nunemaker at 4:51 PM No comments:

Methinks it's about time for a (blurry) unveiling around these parts. I give you the latest Frankenstenian creation from The Cycle World Headquarters, the Retro Rockhopper All-Surfaces Touring Beastie: 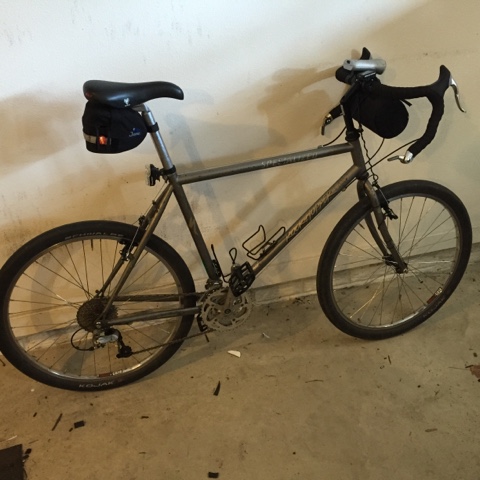 You may recall that this specimen arrived as a badly beaten but mostly bone-stock mountain bike from the days of grunge (and the days when your humble narrator could grow a full head of hair). The trashed (cheap) parts, battered paint job, and dented downtube (who dents a downtube?!?) spoke to a long, hard life being ridden as an actual mountain bike. But, like Charlie Brown shopping for a Christmas tree, I saw something in this ragged, run-down wreck and brought it home.

Now, thanks to a deep parts box and a project-tolerant spouse ("You're STILL futzing with that thing?"), it's starting a second life as a pavement/dirt/gravel/commuting/whatever bike. I would say that the inspiration came from Bicycle Quarterly's recent embrace (and term-coining) of Enduro Allroad bikes, but I've been obsessed with critters like this since ol' Rocky up there was brand-spankin' new. The true inspiration was probably the drop-bar mountain bikes Charlie Cunningham made for his wife, the legendary Jacquie Phelan, or maybe the iconically weird drop-bar 1987 Bridgestone MB-1.

Putting aside the twisted connection of synapses that motivated it, here's how it's built up:

If you're interested in playing along at home and rescuing your own vintage MTB as a newfangled Enduro Allroad bike, here are a few tips/potential gotchas:

So, dear reader, thar she blows. She may not look like much, and I've yet to determine how fast she can make the Kessel run, but I smile every time I throw a leg over this little slice of 1995.
Posted by Jason T. Nunemaker at 7:02 PM 1 comment: