As promised, here are a couple close-up shots of the rim that was felled by ninjas. First, the obvious point of failure: 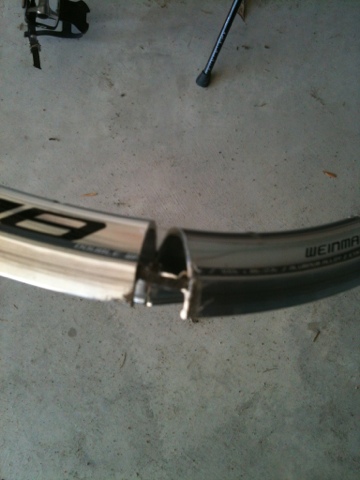 The rim itself is a fairly low-budget OEM Weinmann with no eyelets but three chambers -- basically, a quasi-Deep V exterior shape with a couple tunnels thrown in for added girth and (one would assume) strength. It popped right at the seam, which was (as near as I can figure) behind and above the tire's contact patch, perpendicular to the impact, and right in the worst of the blast zone.

I assume from what little I know of rim construction that this is what's called a "pinned" rim, since there's certainly no sign of a weld here. That wiry looking bit spanning the gap (and barely holding the rim together) is a metal pin with spiral grooves running in opposite directions away from the centerline. My guess is that the pin plus some sort of industrial sticky stuff plus a lot of pressure holds the rim together, at least until some idiot hits it from the side.

(Aside: What you can't see is the big rim decal on the reverse, still valiantly holding across the chasm of failed rim. The moral of the story, kids, is that big, ugly brand labels are actually supposed to be a safety feature.)

There was also an interesting failure mode away from all the excitement: 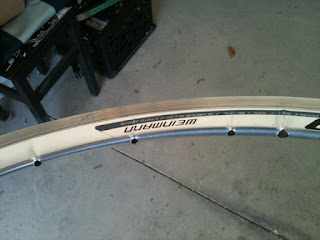 I didn't even notice this part until I took off the tire and tried to take off the (miraculously unscathed) tube. Seems that as the rim failed at the bottom, it lost a bit of diameter, squeezing down the valve hole and spoke holes at the top. See the tell-tale wrinkled decal at each hole and funky reflection at the un-decaled hole? So when I tried to extract the tube, I ended up yanking off the valve stem, thus making it unscathed no more.

I dearly hope no one takes this as a shot at Weinmann or their products. Remember, this rim took a pretty nasty lateral smack, the sort of thing that would put just about any hoop in the recycling bin. Even if the joint had been welded, I suspect the force would have potato-chipped it past the point of re-true-ability.
Posted by Jason T. Nunemaker at 8:59 PM 2 comments:

Attacked By A Pack Of Bike Ninjas!

What is a group of ninjas, anyway? A herd? A flock? A gaggle? In this case, I'm going to go with a murder, since a) they were as hard to spot in the dark as crows, and b) that's what was in my heart after the encounter.

So there I was, just a'mindin' my own business, getting in some high-quality after-dark miles on a local rail-trail during this bizarrely early Spring we're enjoying here in the Middle West. Had my most blindingest headlight on, came around a curve (staying tight to the right since the line of sight was ever-so-slight), when KERBLAMMO. Hit head on by an oncoming lightless ninja on the wrong side of the trail... because he was riding side-by-side with ANOTHER ninja friend, and two more were paired up right behind them. It was like Noah's Ark of Idiocy.

It happened fast enough that I can't say for certain who hit what where, but I'm pretty sure (based on injuries to bike and body) that I got my front wheel turned to the right just as I got whacked. The result was this: 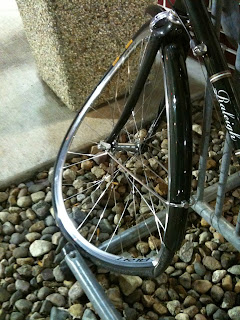 Of course, Mr. Ninja (did I mention that he reeked of the products of the local watering hole that he and his pals had no doubt just left?) was firmly convinced that I was the one on the wrong side of the trail, and his pals (even the one who was riding to his right) agreed. Discord ensued. Obscenities were shared.

Now, if you know me, you know I'm not one to back down from a fight. I'm one to run away from it, shrieking and flailing my arms. So when Team Chucklehead determined that their buddy's wheel was fine, I was more than happy to see them mosey on down the trail before those obscenities escalated into something I was ill-equipped to handle both physically and emotionally. In my best passive-aggressive interior monologue, I hoped that I'd damaged his carbon fork in a way that would catastrophically fail at the worst possible moment. And I imagined that moment. Over and over and over. (I'll say three Our Faustos and five Hail Garys for the sin of harboring evil thoughts about thy neighbor's bicycle.)

The tally of injuries to my person won't be complete until an MRI on my left knee in a couple days. And since I can hear the cries of bike nerds the world over as they wonder how the bike fared, here's the run-down:

Surprisingly, everything else looks good, save for a couple paint dings. No telltale paint wrinkles or cracks that would make me suspect frame/fork damage, alignment seems solid, no obvious signs of front-end wonkiness.

So, dear reader, fear the ninjas. They're out there... somewhere.
Posted by Jason T. Nunemaker at 7:49 PM 3 comments: