Have You Seen The Bridge?

Okay, so who knows the obscure Led Zeppelin reference? Anybody? Bueller? Bueller?

I'm on a break from the multi-part review (delaying my "customizations" post yet again) for a snippet of local color. Des Moines just got a snazzy new pedestrian/bike bridge downtown over one of our (swollen) rivers, so I detoured over there on my homebound commute tonight. Here's a look from the east: 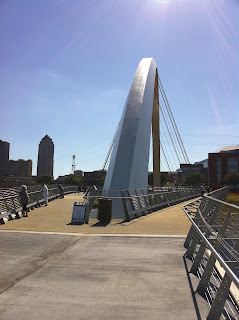 And here's the view when you're actually aboard this bifurcated beastie: 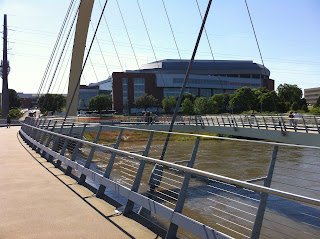 Down at the end, you can just make out local news-meisters Kevin "The Cronkite of Des Moines" Cooney and Cynthia "You Try Being Professional on Live TV When the Weather Guy Has an Albino Python in his Pants" Fodor (believe it or not, that's a work-safe YouTube link). Someone must have yelled "Action!" since the soon-to-flood river roiled right on cue: 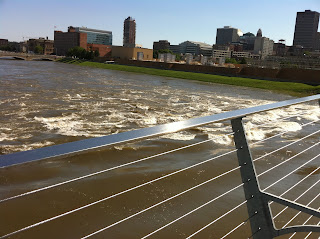 And here's a distance shot from the west side: 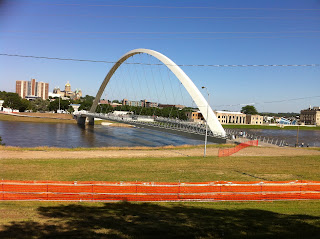 I'm just hoping (along with the rest of Des Moines) that the flood waters aren't as bad as expected and the river stays right there where it belongs.

After this shot, I had to bolt, as I was standing right outside the Wells Fargo Arena -- which has a bad Justin Bieber infestation tonight. Luckily, I know that I can take 21 Justin Biebers in a fight:

Back when I started this epic tome of a review, I mentioned that the good folks at Xootr had no clue I was talking nice and/or smack about their cute little bike. Alas, now I am a liar.

I sent them a friendly e-mail to say, "Hey, dudes, writing this thing, if you want to comment, I'll post it." I figured the opportunity for a "Manufacturer Speaks"-style rebuttal/agreeal (as seen in legitimate paper-based bicycle journalism, a.k.a. Bicycle Quarterly magazine) would be a nice gesture. Couple days later, I got a very friendly response from Brian at Xootr, who had this to say:

The one thing I would like to address is the fit. As you imagine it is hard to fit someone to a bike when you do not have them physically there with you, so going by height is more like a best guess. More often than not [it] works, but sometimes it does not. When it does not we will ship different posts, stems, etc. in order to get the correct fit for a customer. We let them play around with a combination that works best for them. We do so at our expense, sometimes including a return label or not depending on the proximity of the customer (otherwise they just keep the unused parts).


Having fitted lots and lots of people to lots and lots of bikes in person, I totally agree with Brian here. Fitting is a weird quasi-science, and it's sometimes even hard to get right when the person's standing in front of you. I give kudos to Xootr (Xootr kudos?) for providing a lot of detailed information about the reach at a variety of saddle heights and for letting customers guess and check at no additional expense. Heck, some brick-and-mortar bike shops won't do that. Plus, at the risk of beating this drum again, the bike's design (using standard inch-and-an-eighth threadless stems) really lends itself to fit tweaks down the road, unlike a lot of other folders on the market. Brian went on to say...

I will pass along the issue with the hub. They are supposed to be correct from the manufacturer, but we will inspect those in the future. Also not being an engineer or the designer (or any other designer for that matter), I cannot comment on the 130mm to 135mm spacing on the rear triangle and what stress it may or may not put on the frame. What I can say is that the frame is covered for life, but never in my 5 years with Xootr has a frame failed in that area.

I was glad to hear they're going to keep an eye on those rear hubs. Maybe I got the one their supplier set up on a grumpy Monday morning and all the rest were fine, but it really would have eaten itself alive without the intervention of a semi-trained mechanic. Regarding the rear spacing, I felt kinda guilty when it dawned on me that I'm not an engineer, the designer, or a designer either. I'm just a schlub off the street who likes to hear himself talk in blog form. So I hereby rescind my Chicken-Littling about possible long-term frame damage, but I stand by my original assertion that 132.5mm rear spacing is a royal pain in the chamois when you're trying to install a 130mm or 135mm rear wheel. As Stephen Colbert would say, "We're at war. Pick a side."

So there you have it, audience of three. I'm a real-live blogger now, in an occasional dialogue rather than a relentlessly self-indulgent monologue. Next on the docket, I'll give that report on pimping my ride that I promised in the previous post.
Posted by Jason T. Nunemaker at 4:12 PM 1 comment:

Enough of your bike-geekery assembly stories, silly man! Tell them how it rides!

Reviews I'd read of the Swift said again and again that it rides "like a bike." Good thing, as I wasn't all that interested in something that rode like an elderly donkey or a pogo stick or a block of cheese. Thankfully, those reviewers were dead-on right. It feels more "big-bikeish" than any folder I've put a leg over to date. I refuse to say it rides like a "real" bike, though, for fear of being accused of snobbism, big-wheelism, or any other sort of -ism.

To force myself into a semi-legitimate review, I first took the bike out in its 100% stock configuration, right down to the wheel reflectors... and I was impressed right off the bat. No creakies, no flexies, and not nearly as uncomfortable as the little wheels and fat tubes would seem to imply. It's weird to the eye, but the parallel 72 degree angles make for a pretty conventional-handling bike. You can feel the lack of rotational inertia in that little front wheel, but it's certainly not unstable. The overall feel is like a mountain bike on road slicks... quick to turn at low speed (nice for in-town urban commando maneuvers), stable once you spin it up (though a bit undergeared at the top end), and fun to accelerate off the line.

Sizing the Swift is one area where I'd be cautious. There's only one frame size, sure, but different rider sizes are accommodated by several seatpost lengths, two stem riser lengths, and three different stem sizes. If you're feeling trusting, you can use the "how tall are you?" size chart on the main bike page of the Swift site. Being a nerd, however, I went immediately to Fitting for Millimeter-Measuring Princess-and-the-Pea Types (not the page's real name, but it should be). Glad I did, too -- the simple chart would have put me on a large (with stock seatpost, slightly longer stem, and the shorter riser), while measuring my favorite bike against the Nerd Page pointed me to an XXL: long post, long riser, and long upjutting stem.

The resulting fit was city-bike right: Able to reach my preferred leg extension with no problems, bars level with the saddle, and a bolt-upright reach. Of course, I don't like bolt-upright, so after just a couple rides in stock configuration, I swapped the stock stem for one that's a couple centimeters longer (aside to Xootr... at least 120mm should be standard issue for anybody big enough for an XXL. Trust me.) That was bliss, and I haven't tweaked fit since. Double-bonus, the stem I swapped in is silver, so my one aesthetic quibble from my last post is now fixed.

Next up: We ditch the reflectors, probably void a manufacturer's warranty, and get down to business with some (minor) customizations!
Posted by Jason T. Nunemaker at 11:23 AM 1 comment:

Origami, Part 3: It's The Little Differences

I was going to apologize for the hiatus... until I realized that nobody's paying for this stuff. (Cue Krusty the Clown "That guy's giving it away for free" quote... and no, I will not drop my pants for food.)

There's been much ado here at The Cycle World Headquarters: a trip to NYC, a distracting newfangled electronic phone-web gadget-thingie, wacky weather, you name it. But before I digress, let's jabber on a bit more regarding the latest test subject in the fleet, my (not quite so new now) Xootr Swift folder.

Part of the holdup was a quest for decent pictures. I'm giving up and admitting to myself that a) I am the world's worst photographer, and b) I spent way too many years of my life learning to make words just to replace a thousand of 'em per snapshot. So, in boring prose prattle, here are some of the Swift's greatest hits, as promised so many moons ago.

Some very cool things I noticed during assembly:
Next up, I promise the rubber will actually hit the road.

Posted by Jason T. Nunemaker at 7:15 PM No comments: