Iowa Bike Expo: Two Seats Are Better Than One

While reading this blog might give one the impression that I am a lone curmudgeonly hermit living under a bridge, I do in fact have a (lovely and talented) spouse who shows even more poor judgment by trusting me to pilot us safely down the road on a tandem bicycle. As a result, many of the bicycles that caught my eye at the recent Iowa Bike Expo happened to have extra seats, handlebars, and pedals between their two wheels. 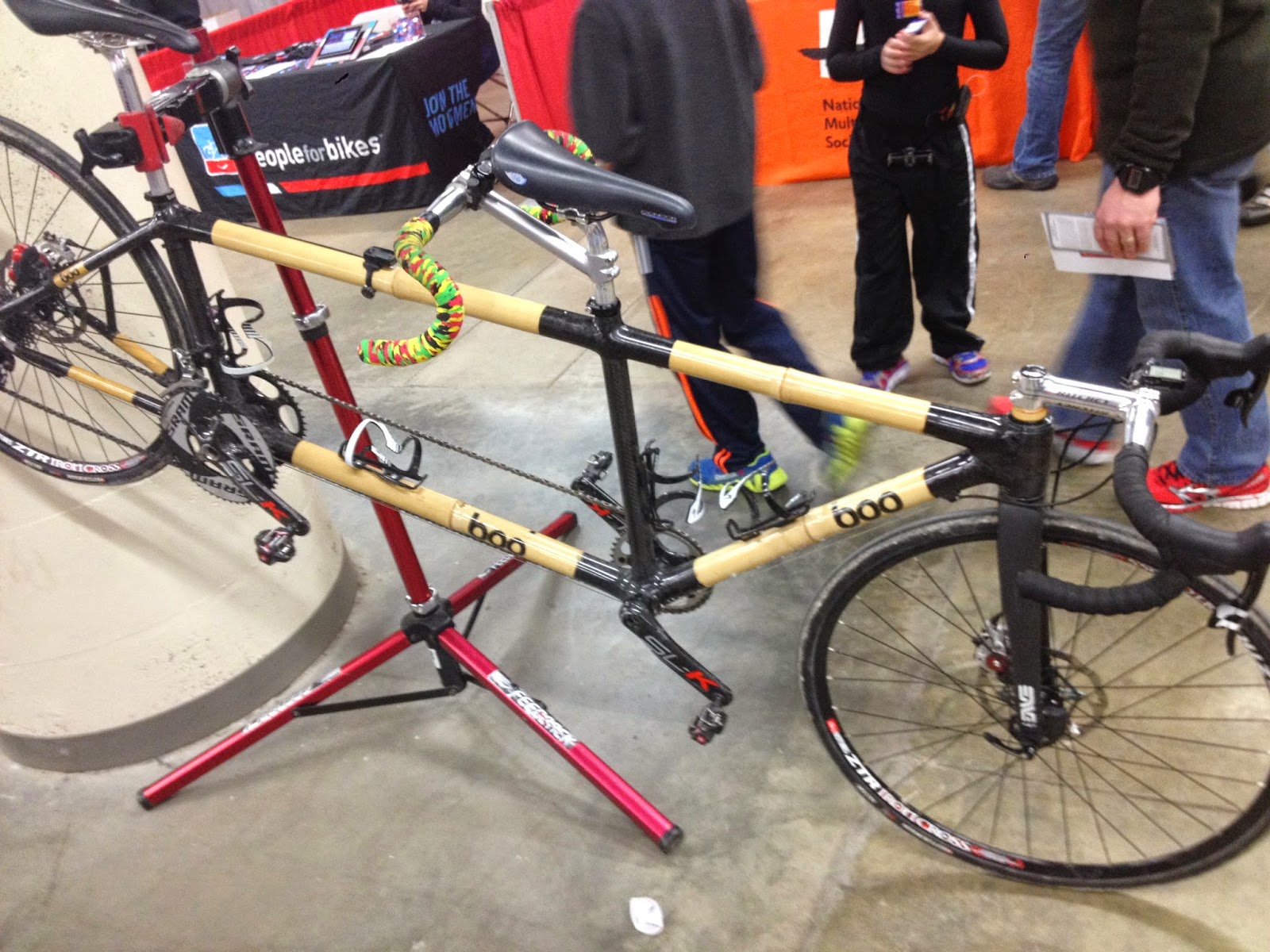 Boo Bicycles brought this part-panda-bear-food, part-crabon-fribre creation. They don't show any tandems on their website, so maybe it's a one-off/custom. (Late-breaking news: Intrepid reporter Steve F. reports in the comments that yes, this Boo for Two was commissioned by a local couple, and it even made an appearance at last year's NAHBS show. Thanks, Steve!) 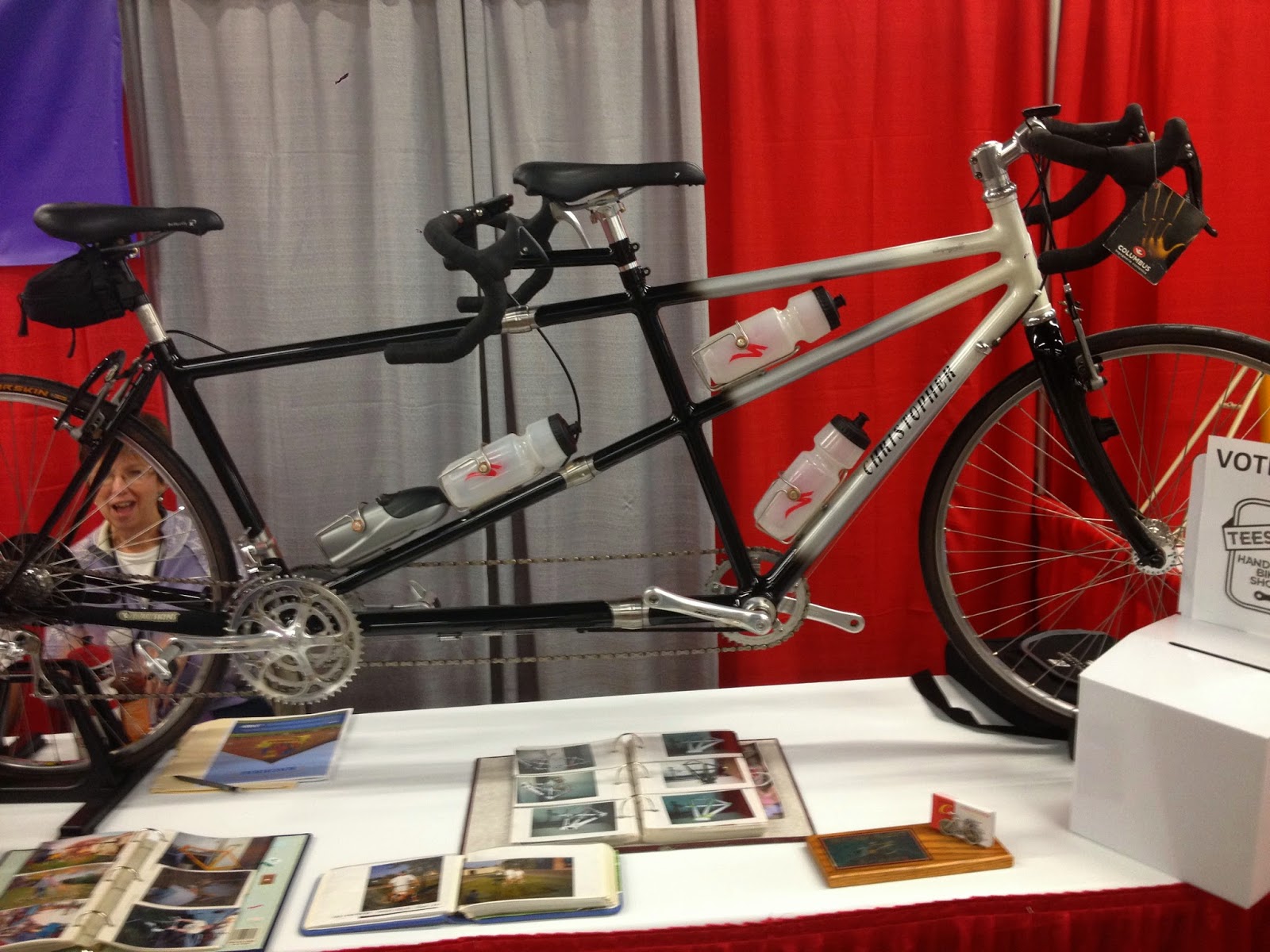 A smooth, Campy-equipped, S&S-coupled custom from Christopher. Christopher who? Dunno. And I can't find a web presence. I suck at this journalism thing. (Later-breaking news: Intrepid reporter Steve K. tells me in the comments that Christopher is the marque of framebuilder Dave Huff, whose family tree of torchwork traces back to Iowa framebuilder Gordon Borthwick. Thanks, Steve!) 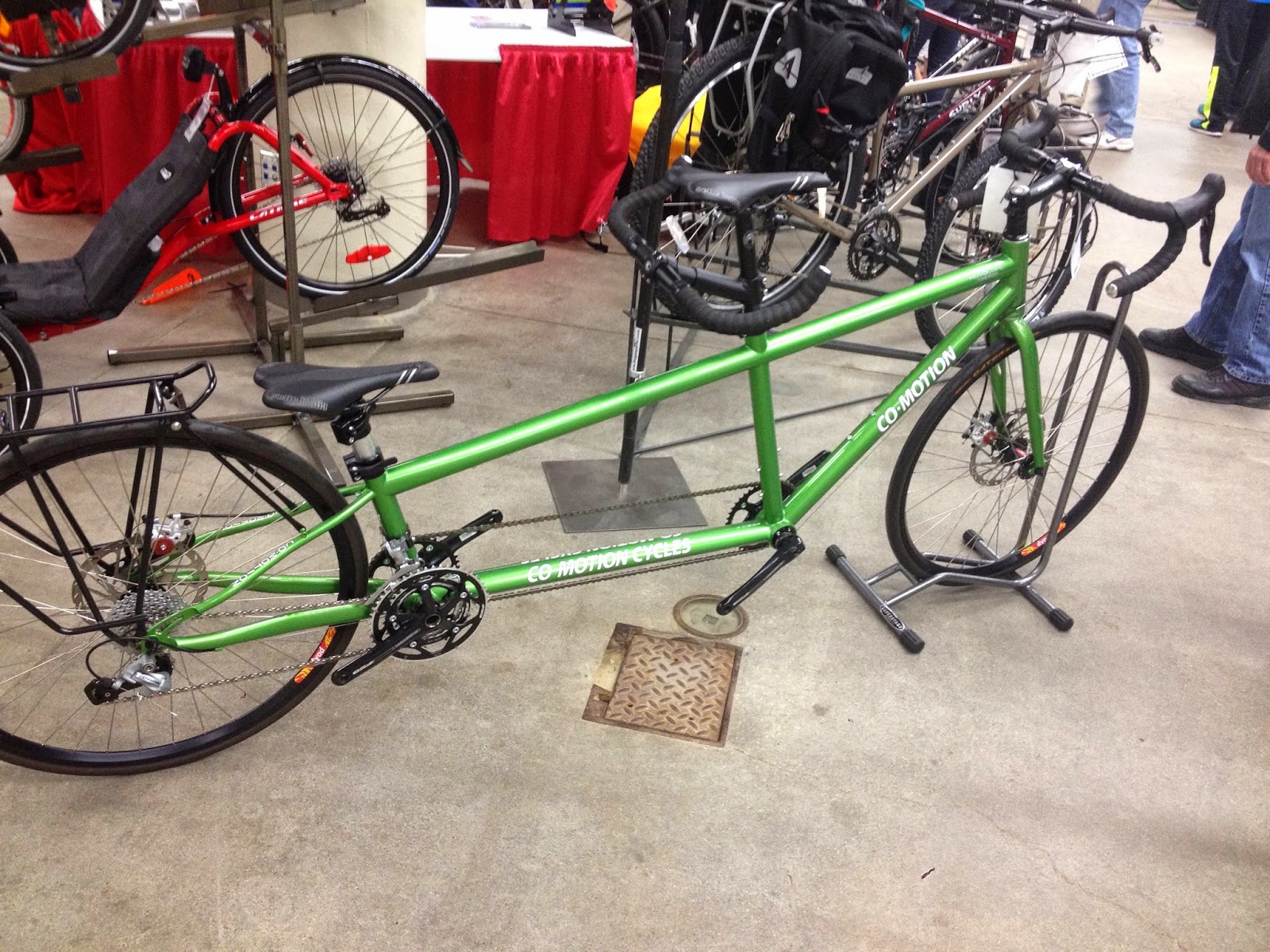 Nothing terribly exciting to see here if you know tandems, just an off-the-shelf Co-Motion Periscope. But dang, those Co-Mo folks know how to bring together a nice-looking twofer. When my ship comes in and this whole blogging thing goes huge (it'll happen! just you wait!), I fully intend to drop some coin on their lustworthy Java 29er/adventure tandem before I do anything silly like pay off the mortgage. 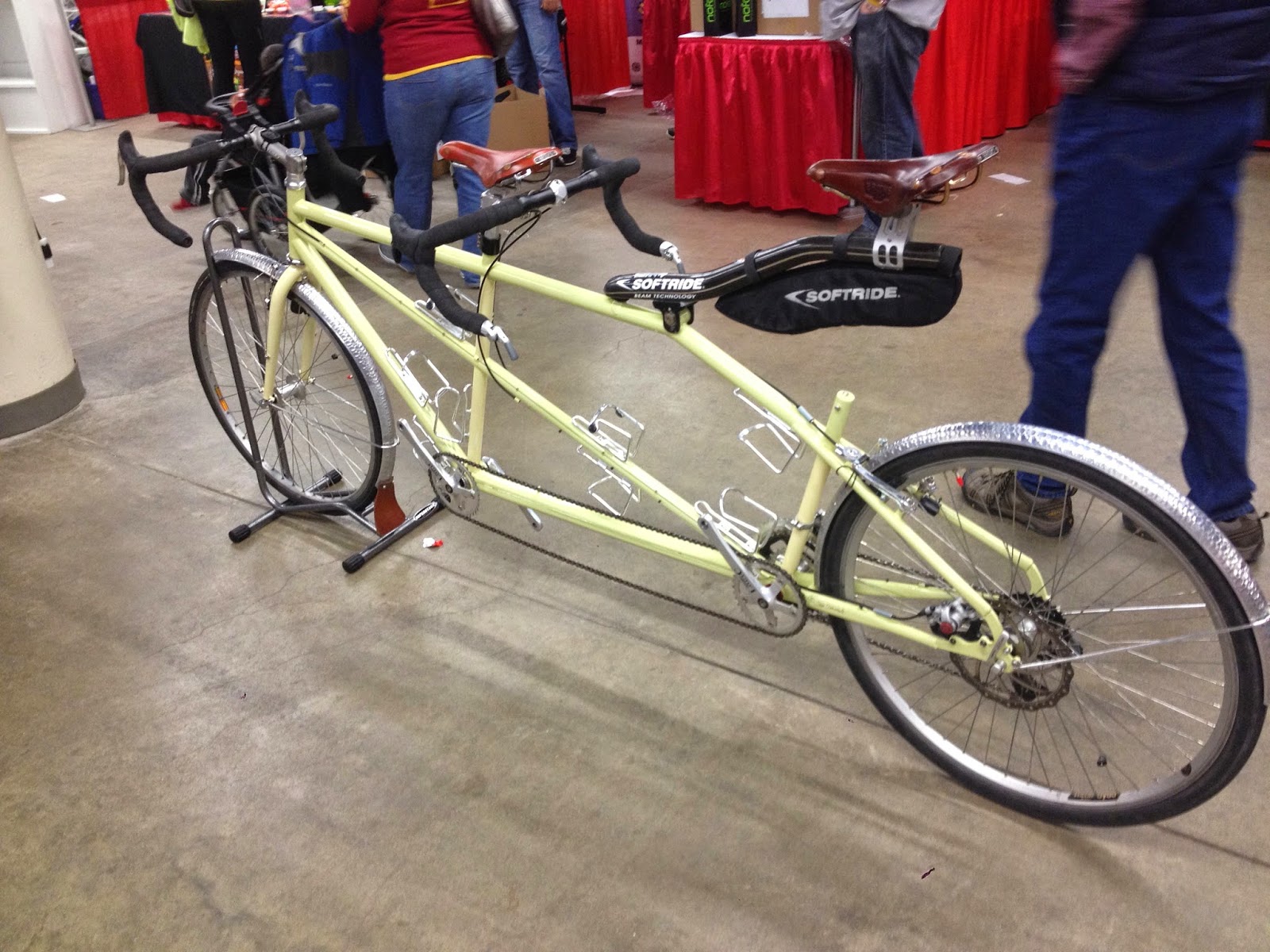 I couldn't figure out who was responsible for this Softride-equipped beauty as it was logo-free and sitting in an aisle, not clearly associated with any particular booth. (I told you I suck at journalism.) Sure, the carbon fiber diving board is a little incongruous on an otherwise classic-looking machine, but as any good tandem captain will tell you, do NOT argue with the stoker over matters of comfort... or anything else for that matter. 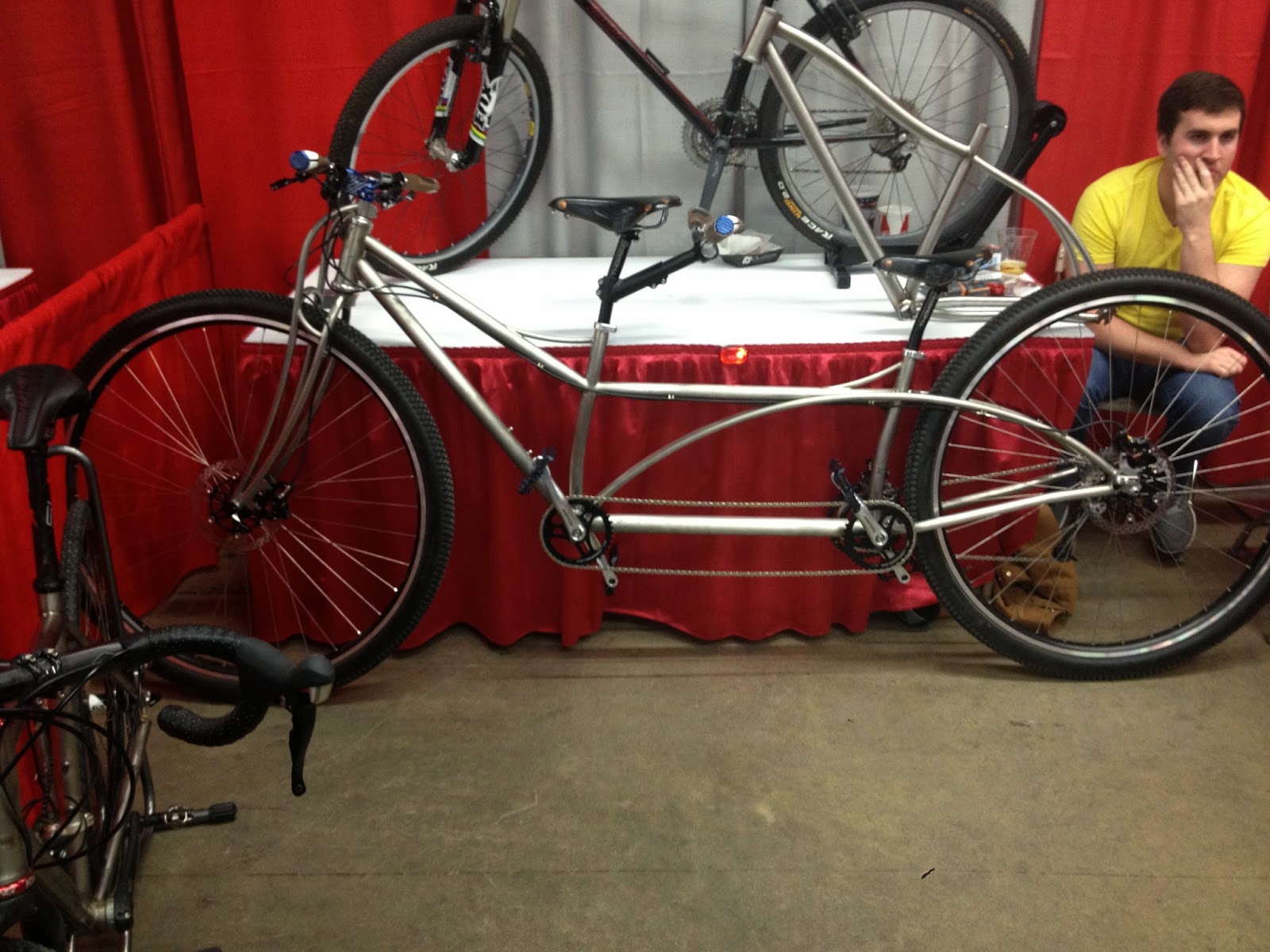 This one made me so happy, I think I actually laughed out loud. It's the product of student designers (like the fresh-faced youth in the yellow t-shirt) from my alma mater, the University of Iowa. If the proportions look odd to you, it's because those are 36-inch wheels. 29ers are SO over, man. (I'm bracing myself for the day that someone comes up with 36-inch fatbikes. You know it will happen.)

So, some good diversity in the two-seater world at the Expo... bamboo, steel, swoopy frames, wagon wheels, you name it. (I vaguely remember seeing a Cannondale too, but I didn't photograph it because I'm a snob/purist who thinks if it ain't welded in Bedford, Pennsylvania, it ain't a Cannondale.) There was certainly enough tandem content at the show to get me excited about the upcoming riding season with the aforementioned spouse, which bodes well for both our physical and marital fitness in 2015.
Posted by Jason T. Nunemaker at 7:04 PM 3 comments: 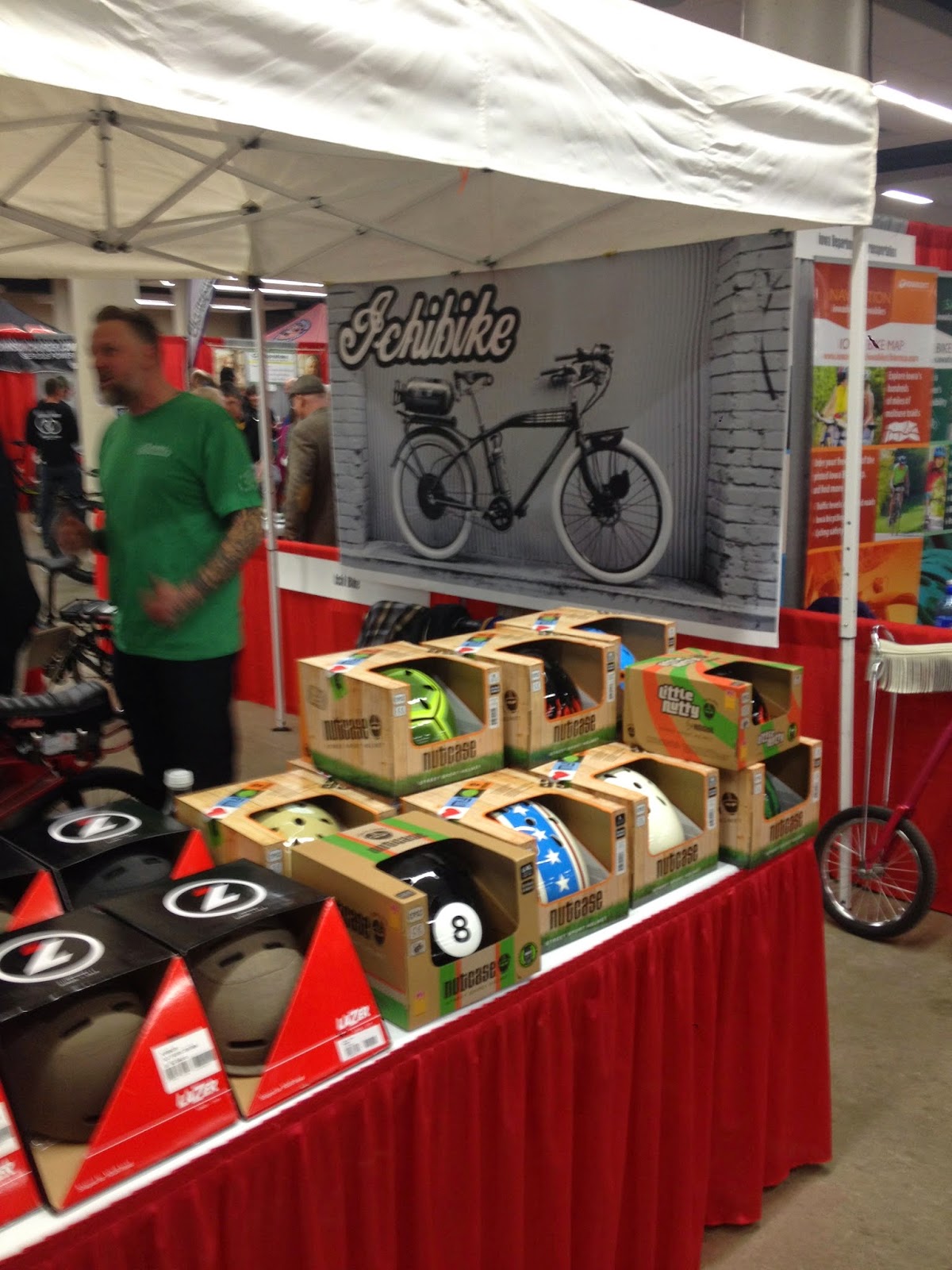 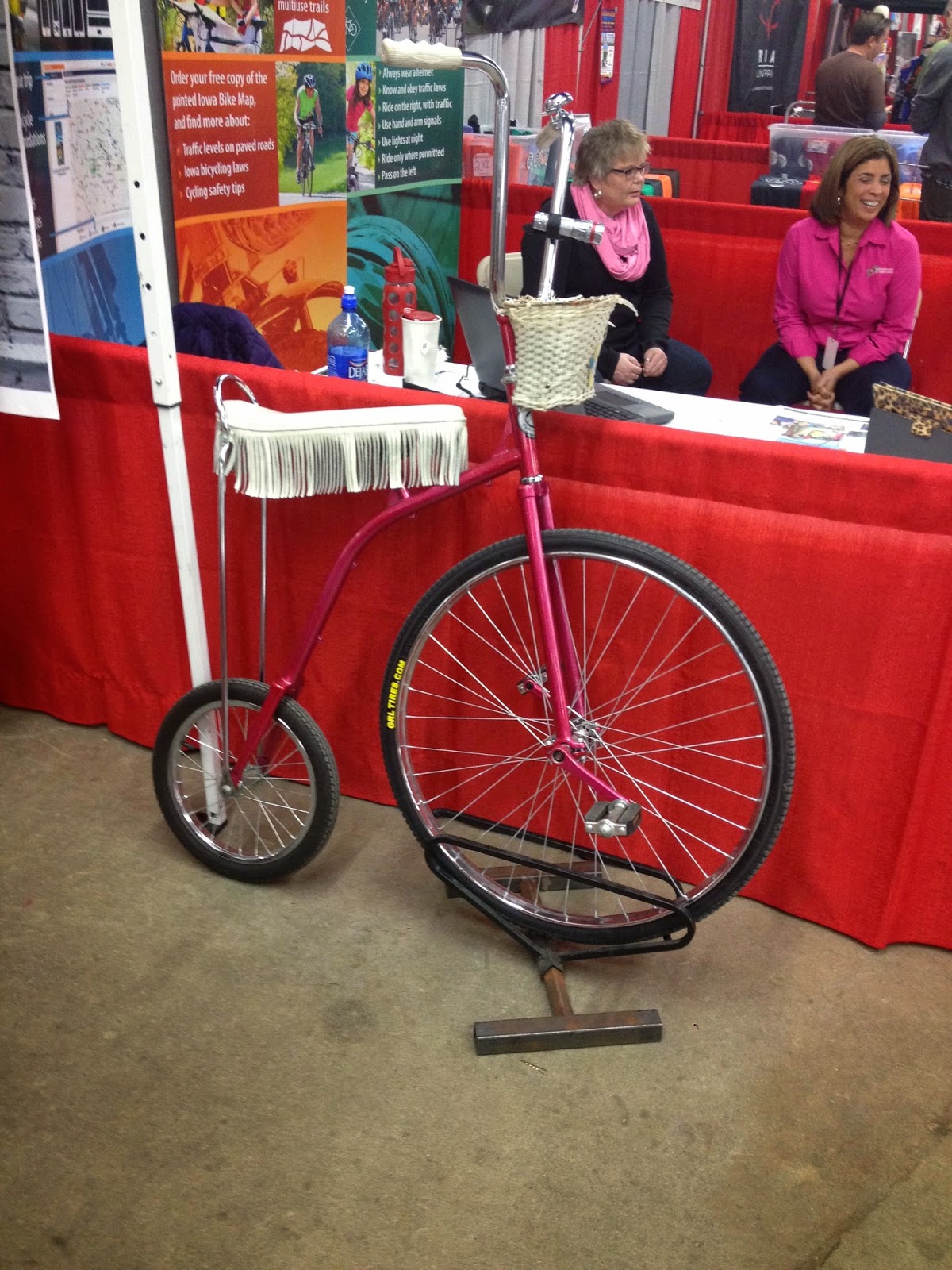 Why yes, that is a hot-pink kids' penny-farthing with apehanger bars and a custom fringed-leather banana seat made from a recycled skateboard! Oh, not weird enough for you? 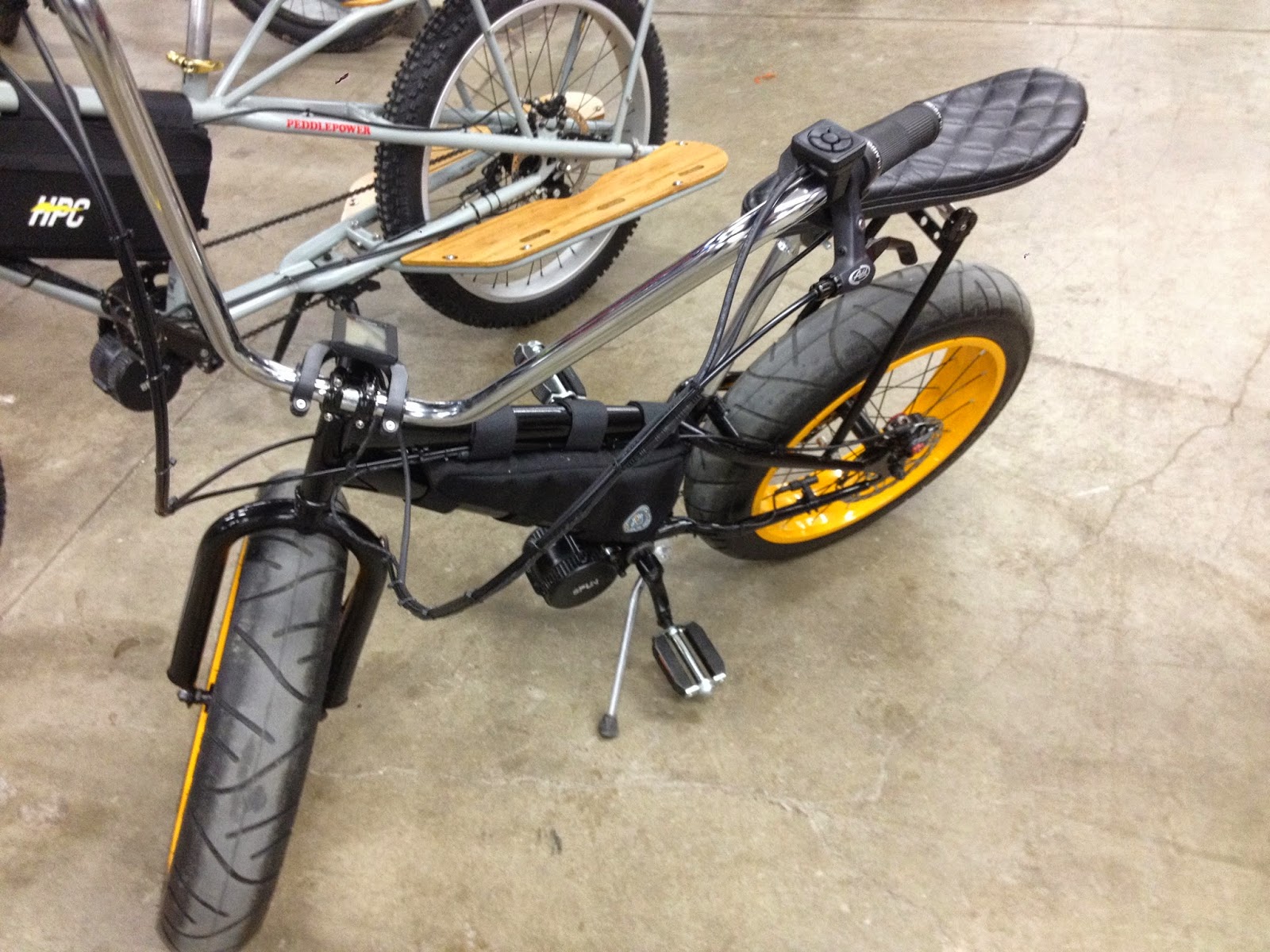 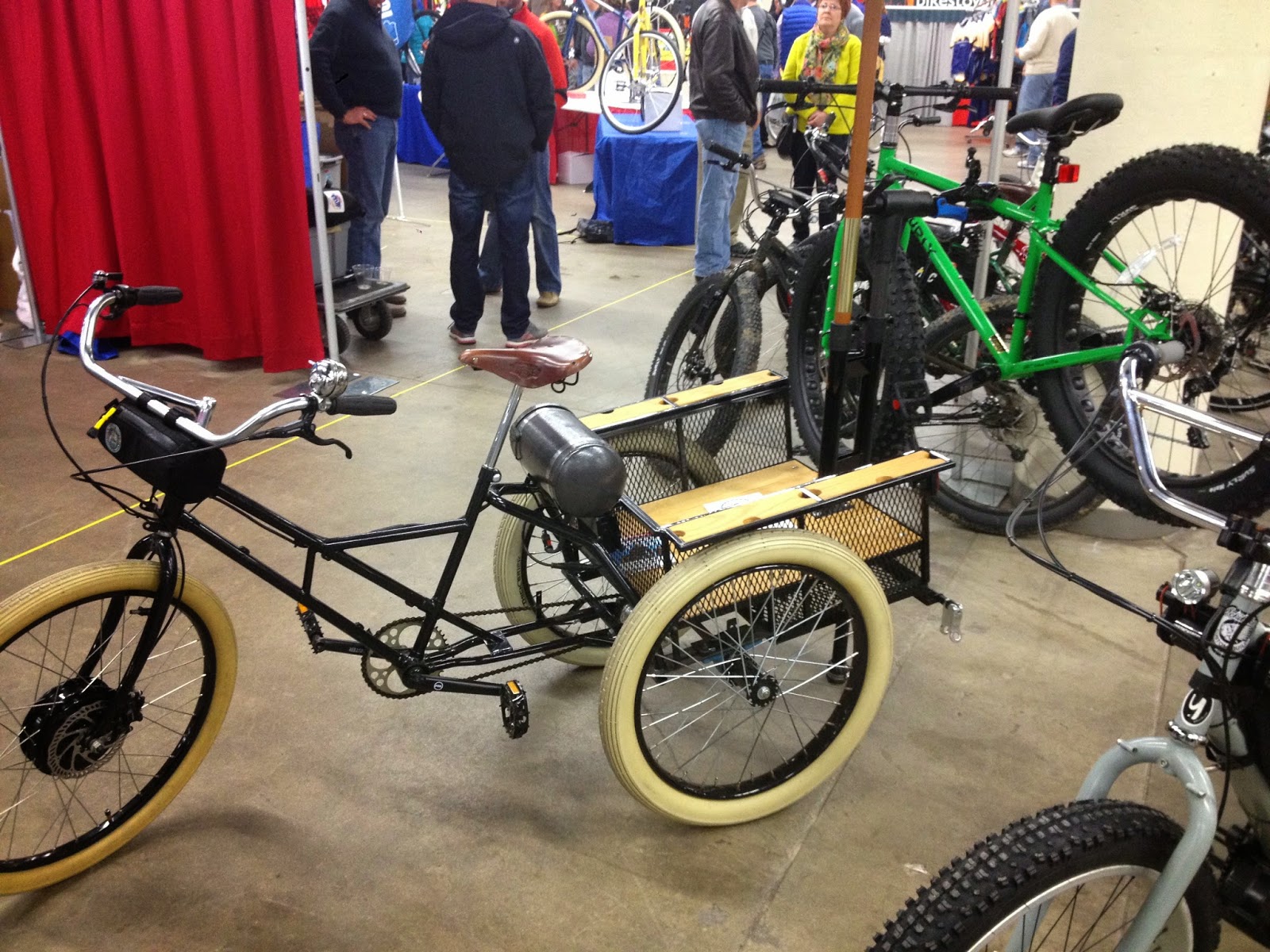 That's the Ichi "mobile shop on an electric-assist trike". Note the Park workstand arm on the back, holding the green fatbike in the air. My bad cropping means you can't see the giant patio umbrella (on the wooden pole) shading the works... because (obviously) wrenching in the hot sun is no fun.

Finally, my personal favorite, since (as you're well aware by now) I'm obsessed with retro mountain bikes: 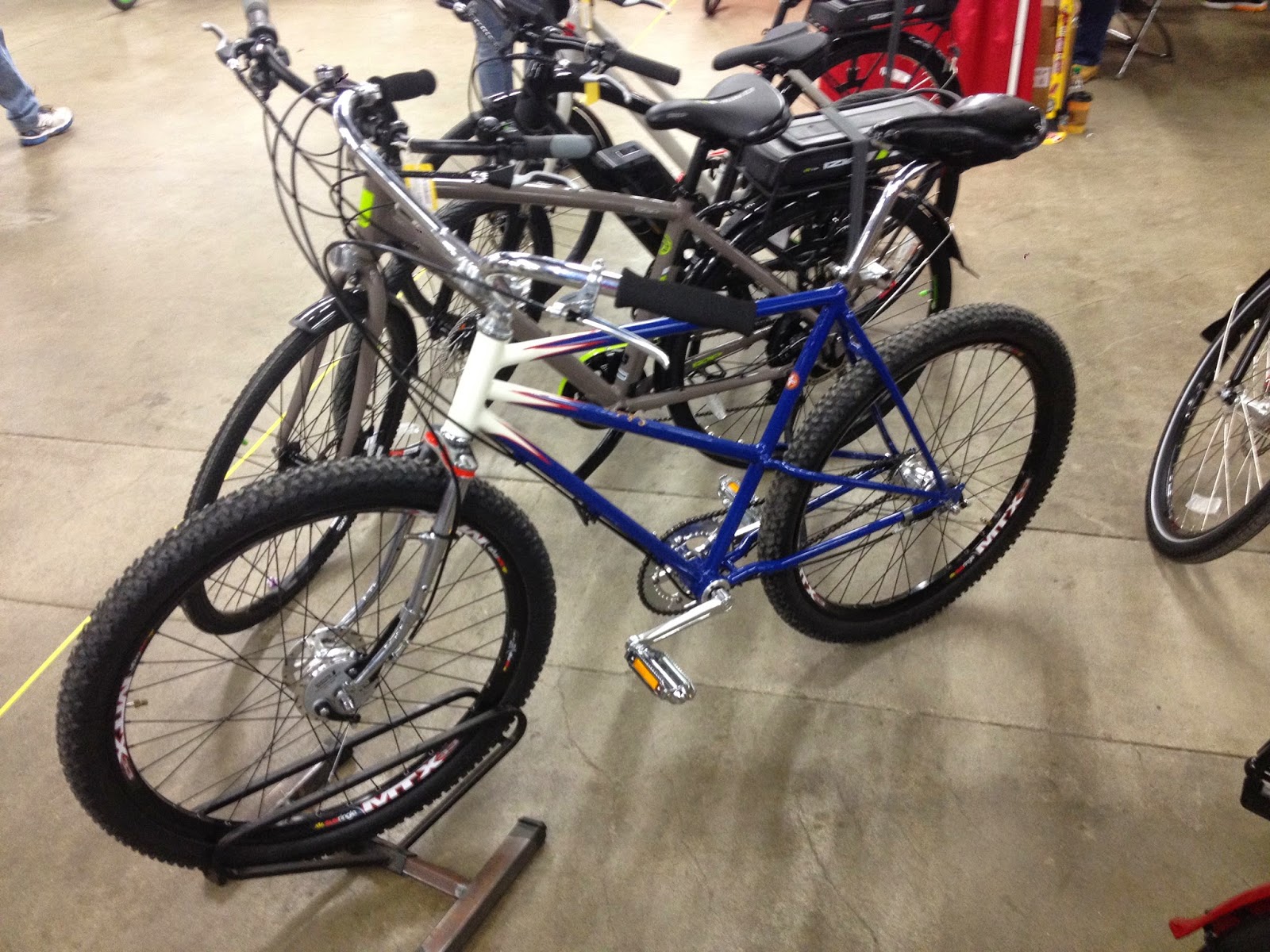 Looks kinda like a late-70s Joe Breeze, no? Actually, it started life as an old Schwinn tandem before the twisted minds at Ichi got their hands on it, chopped it in half, gave it some drum-braked, internally-geared wheels, laid down some classic points and pinstripes, and bam. Instant klunker lust. (I wish it had silver rims for the full-on classic look, but man, that's just quibbling.)

You can see a few snippets of other fun stuff in the background of my photos... more electrics, fatties, cruisers, far-out customs, you name it. Best to just go to the shop and see for yourself, though. Time your visit right and you might run into David Byrne. Yeah, that David Byrne. Did I mention this is kind of an unusual shop?
Posted by Jason T. Nunemaker at 3:30 PM No comments:

At long last, my much-ballyhooed "coverage" of the Iowa Bike Expo has arrived! My initial caveat: I went to the show as a gawking bike nerd, not a journalist, so what you're going to see is just what caught my gnat-like attention as I walked the floor. I make no claim that this is an exhaustive, complete overview of what was there to be seen.

I'm starting off with a bunch of (for lack of a better word) "gravel" bikes that caught my eye. Actually, I think of these things as just "bikes": the all-surface, versatile road bikes that we should have been riding all along had the road bike not been co-opted by the leg-shaving set. I'm going to call them gravel bikes, though, since it's trendy, and trendy means page views, which means the proceeds from this blog will finally allow me to get that new kidney I've been wanting. 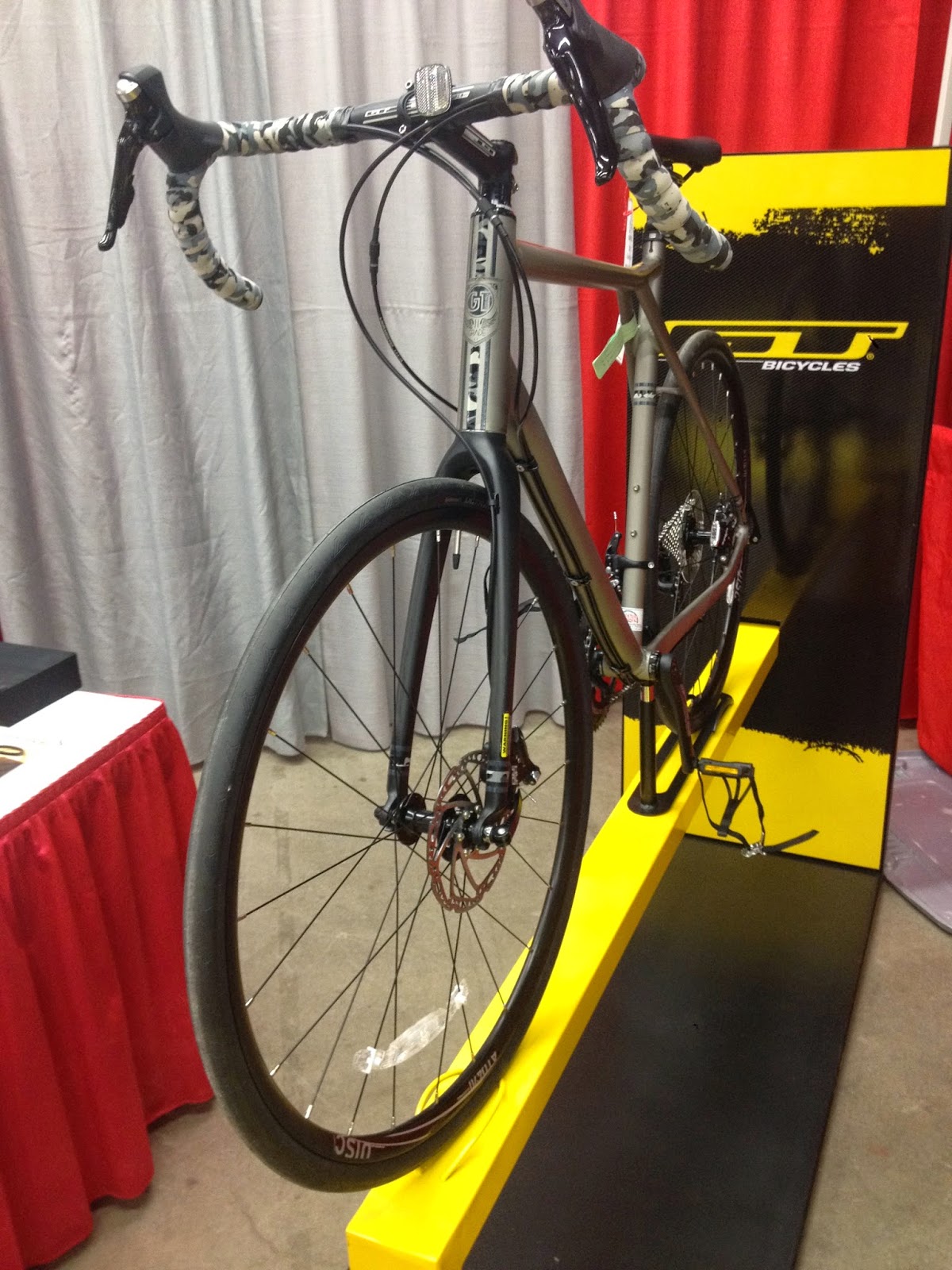 Here's a snazzy little mile-eater from GT. Proving that I am not a journalist, I don't even remember the model name, but the magical Googles tells me it's called the Grade. Hands in the air if you think a GT is not a GT without some form of Triple Triangle frame, even if it's this slightly droopy-looking one. Who's with me? Though if this marks a resurgence of 80s splash-pattern bar tape, count me out. 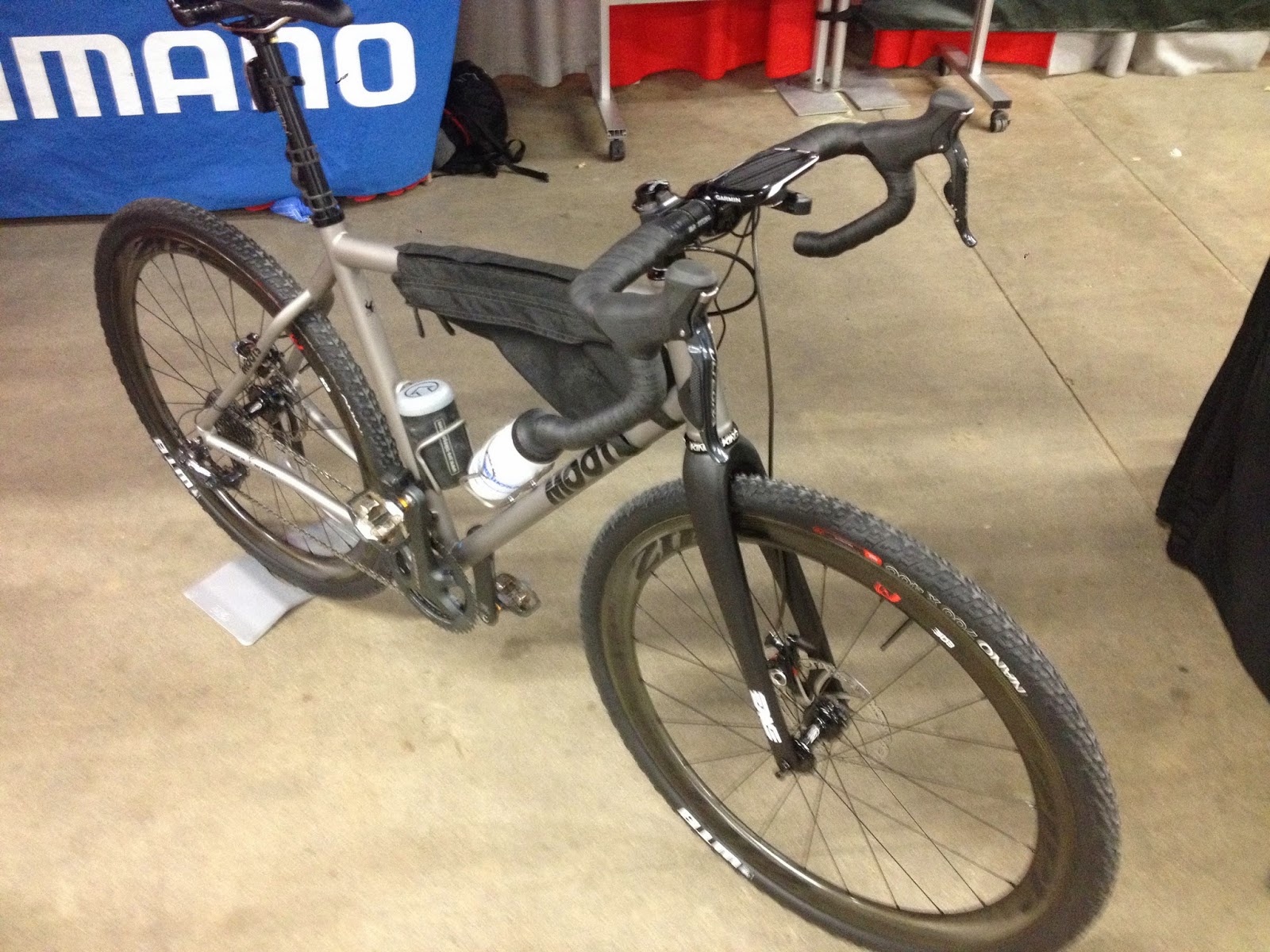 I don't get the carbon aero rims, but otherwise, this Moots Routt looked ready to boogie. Yes, the panniered retro-grouch is actually starting to come around to the look of frame bags. Still lukewarm on disc brakes, but since they seem to be a marketing necessity in this bike category, I'm going to choose to ignore them. 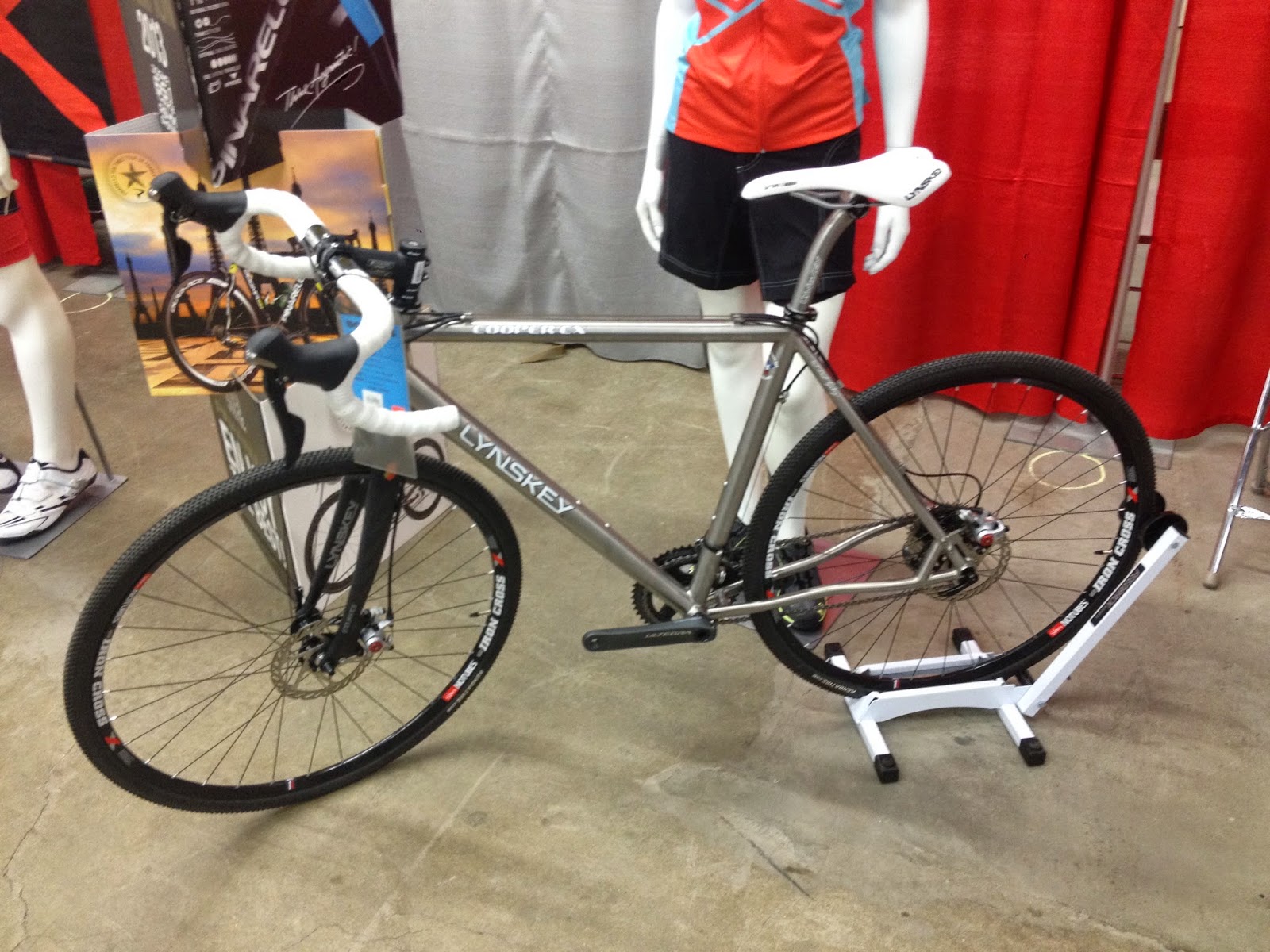 Being a new owner of an old Lynskey-made Litespeed, I couldn't pass by this Lynskey Cooper CX without getting a photo for the family album. 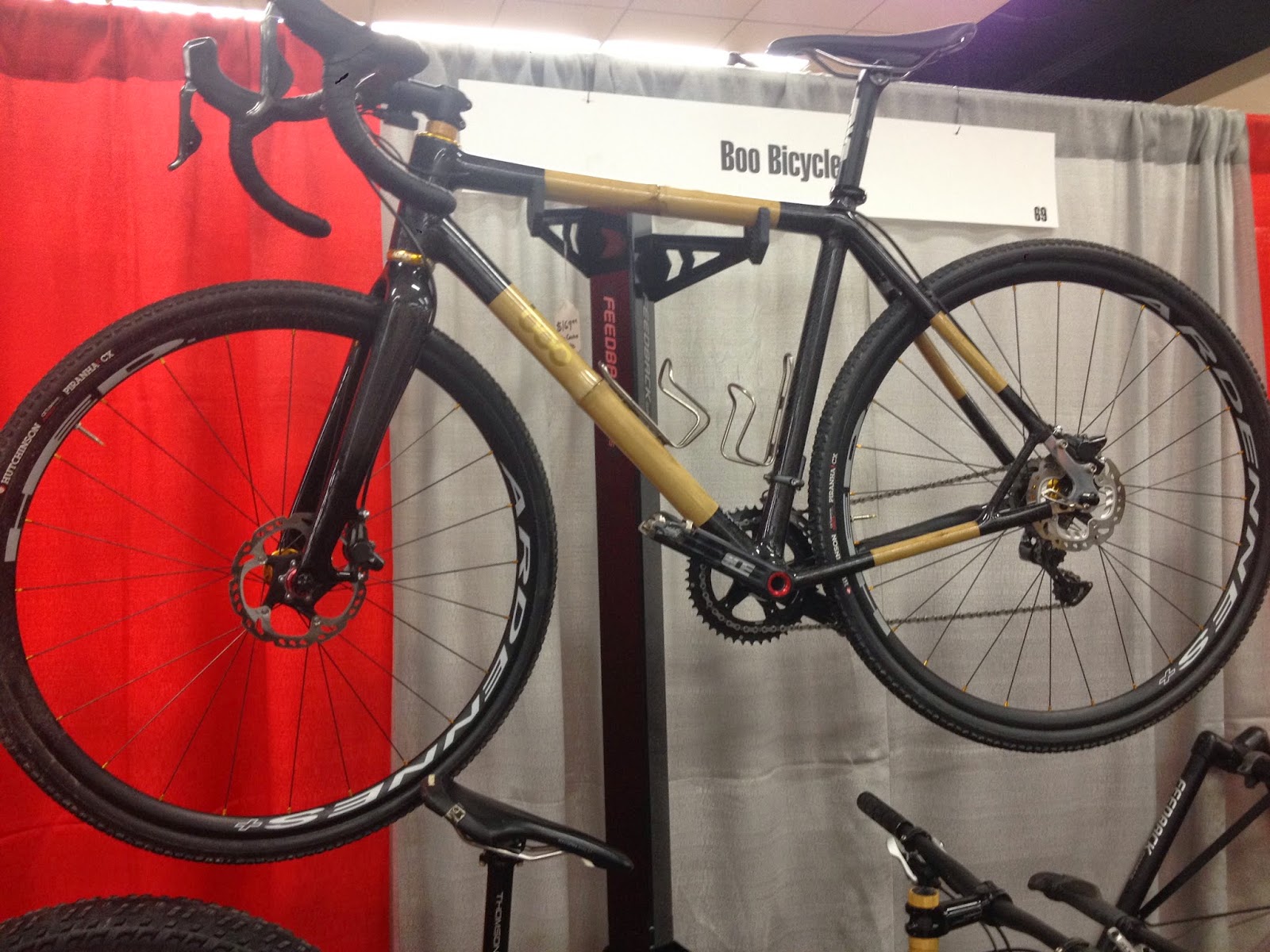 Just to prove that I noticed bikes that were made of something OTHER than matte gray metal, how about some panda-bear food? Boo Bicycles brought this sharp bamboo-infused 'cross machine (and a tandem that will appear in another post). 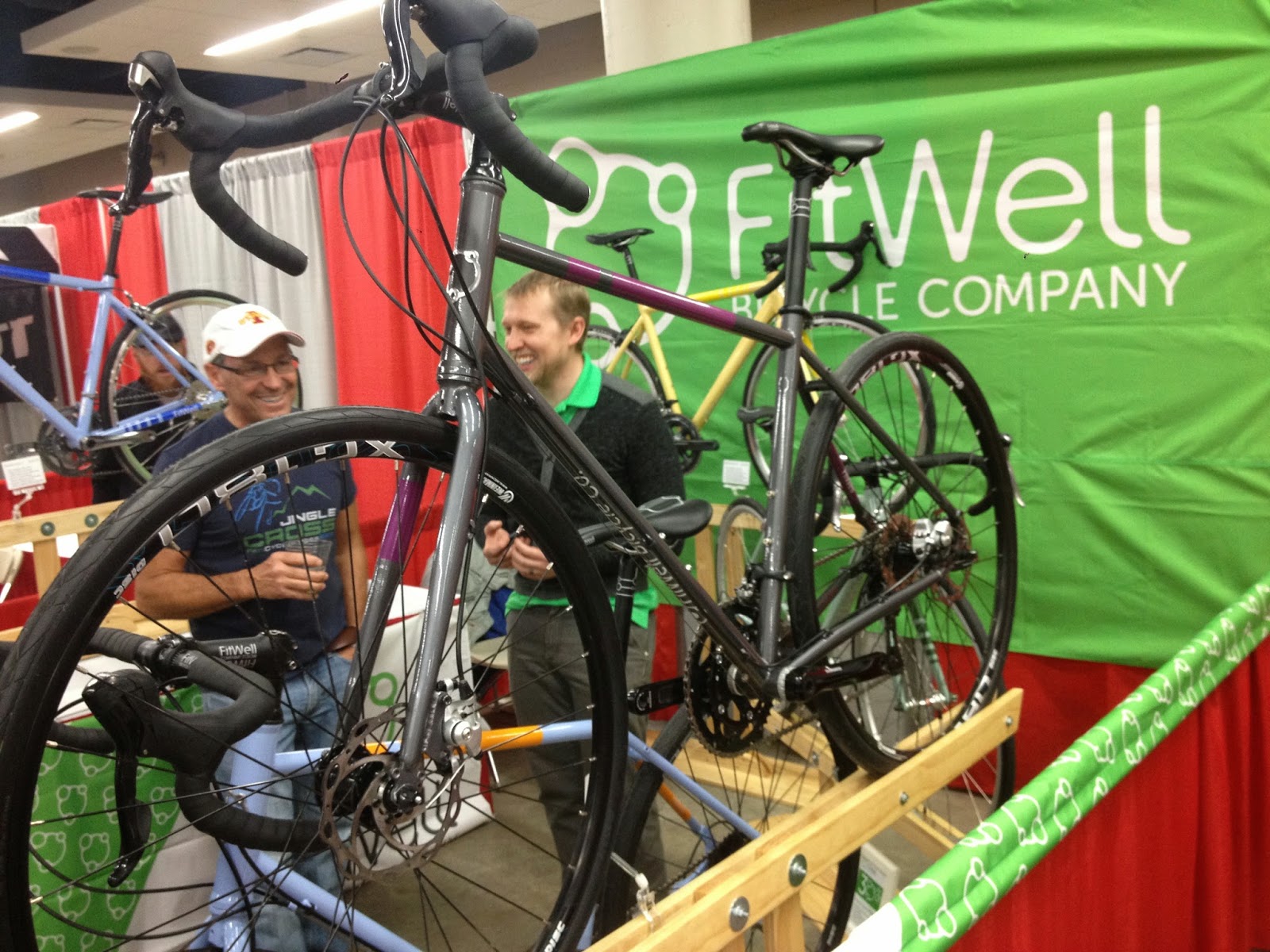 As if Pal Steve's talk hadn't already shamed me with things I didn't know, I discovered a company I'd never heard of too. FitWell Bicycle Company brought both their steel, multi-surface Fahrlander (above) and the more pavement-specific DeGroot (below). I have to admit, I didn't dig deep into the specs on these -- I was too smitten by the subtlety of their paint and decal work: just a name under the downtube, some classy contrasting stripes, and a sharp headbadge. Let's decree that 2015 will be the end of the decal-vomit school of frame decoration, shall we? 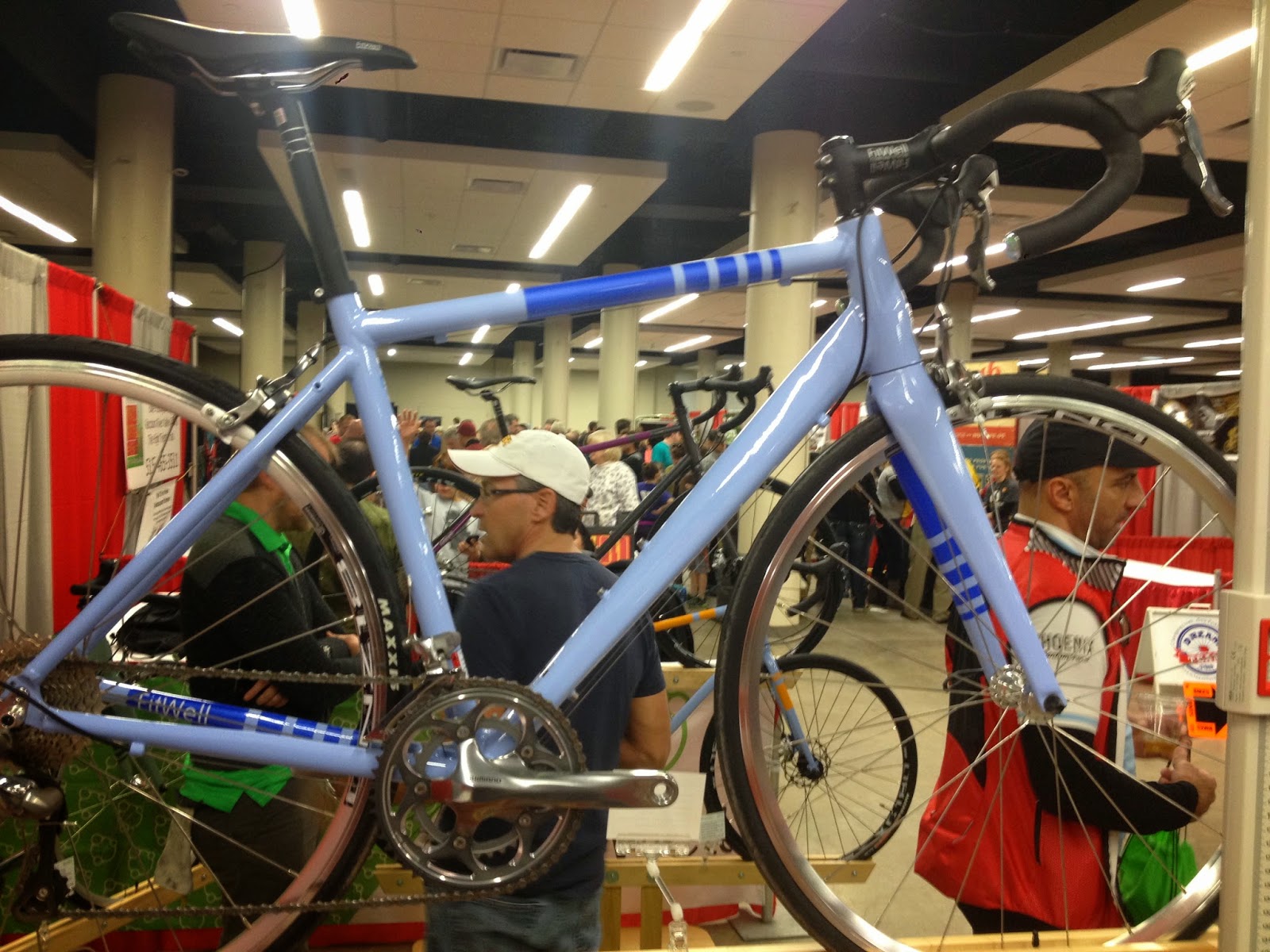 A Talk Packed With Good Information (See What I Did There?)

At long last, here's my report on Pal Steve's chat on bikepacking at last weekend's Iowa Bike Expo. Proof that if you're coming to these pages for breaking news, you're definitely in the wrong place.

The day of the Expo was gorgeous... sunny, light-jacket weather that shamed me out of driving to the event. Of course, I live just a couple miles from the location. By the time I got there, the presenter had already proven his bona fides with a 60-something mile gravel/B-road ride that morning -- evidence of which was still on the bike he showcased during his talk. 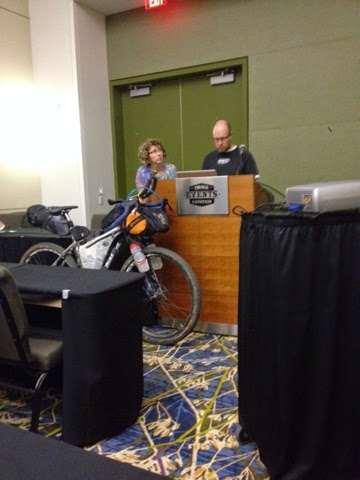 There's Steve setting up for the event with the love of his life. And his wife Kathy's helping, too. (rimshot) I kid! I kid! It is a nice bike, though: a titanium Salsa Fargo, kitted to the hilt with Steve's favorite gear.

Which leads me -- paradoxically -- to my favorite takeaway from Steve's talk, namely that the real key to bikepacking isn't the stuff of bikepacking. Bikepacking is not (as some snarky blogger once said) just loaded touring with a new set of bags. It's backpacking by bike, touring off the beaten path: gravel, dirt, sand, snow, you name it. Did folks do loaded touring like that in the heyday of loaded touring without giving it a new name? Probably. But (in my opinion) we really needed to be in a post-mountain-bike world (and an ultralight backpacking/hiking world) for it to become a thing.

Steve (wisely) introduced the crowd to the idea of the Sub-24-hour Overnight, or S24O. This is just what it sounds like: An overnight trip that you do in less than 24 hours. Load up your bike after work, ride dirt or gravel out to a campsite within your mileage range (whatever that might be), sleep under the stars, and ride home the next day. This is the gateway drug of bikepacking: very low barrier to entry, very low risk to your health and well-being if you forget something, easy-peasy.

(I should pause to say -- and Steve would probably say the same -- that the S24O was not his original idea. I first learned about it from the writings of Grant Petersen from Rivendell Bicycle Works, and I'm guessing he didn't invent it either. Regardless, it's a great way into camping by bike. For S24Os with an entirely different feel -- hammocks and coffee! -- check out fellow blogger Pondero.)

Steve also wisely emphasized that there's no right or wrong way to bikepack. Ride what you have: MTB, 'cross bike, touring bike, fat bike, whatever will hold your gear and hold up to the terrain you're traversing. He happily answered equipment questions from the audience about wheel size and brake type (he rides 29er MTB wheels and disc brakes, for the record) but jokingly referred to them as "religious wars" to emphasize (again) that lots of things work and a lot of choices come down to the rider's preferences.

Being a gear nerd, though, I can't help but share a better photo of Steve's bike I snapped later at the Expo as it leaned jauntily against the Rasmussen's Bike Shop booth: 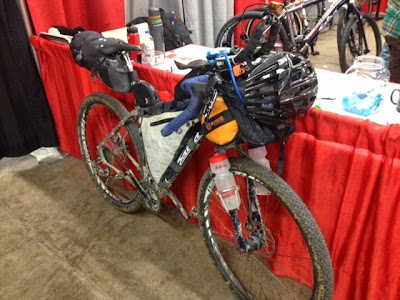 I like this thing a lot. Part road, part mountain, muck-encrusted, and ready for anything. Tri-bars with a dynamo-powered headlight clamped to the end? Sure! Bags crammed into every crevasse? Why not? I'm even going to give him a pass for the helmet hanging on the handlebars (one of my pet peeves) because I know he doesn't actually ride like that... right, Steve?

So, bikepacking: It's not made-up marketing hooey. And it kind of looks like fun. Consider your never-humble narrator officially schooled. Now where did I put my tent?

(Steve will really be putting his mileage where his mouth is this year by making an attempt on the 2015 Tour Divide, an adventure that I'll definitely be following and reporting on in these pages. Wish him luck!)
Posted by Jason T. Nunemaker at 12:16 PM 4 comments: