As regular readers know, one of my minor obsessions is bicycle lighting and the many ways (in my curmudgeonly opinion) it could be improved. As a result, I was recently contacted by the inventor of the Sombra, dubbed "the world's first tail light diffuser."

If you're scratching your head over what a "tail light diffuser" might be, think of it as the bike equivalent of turning this: 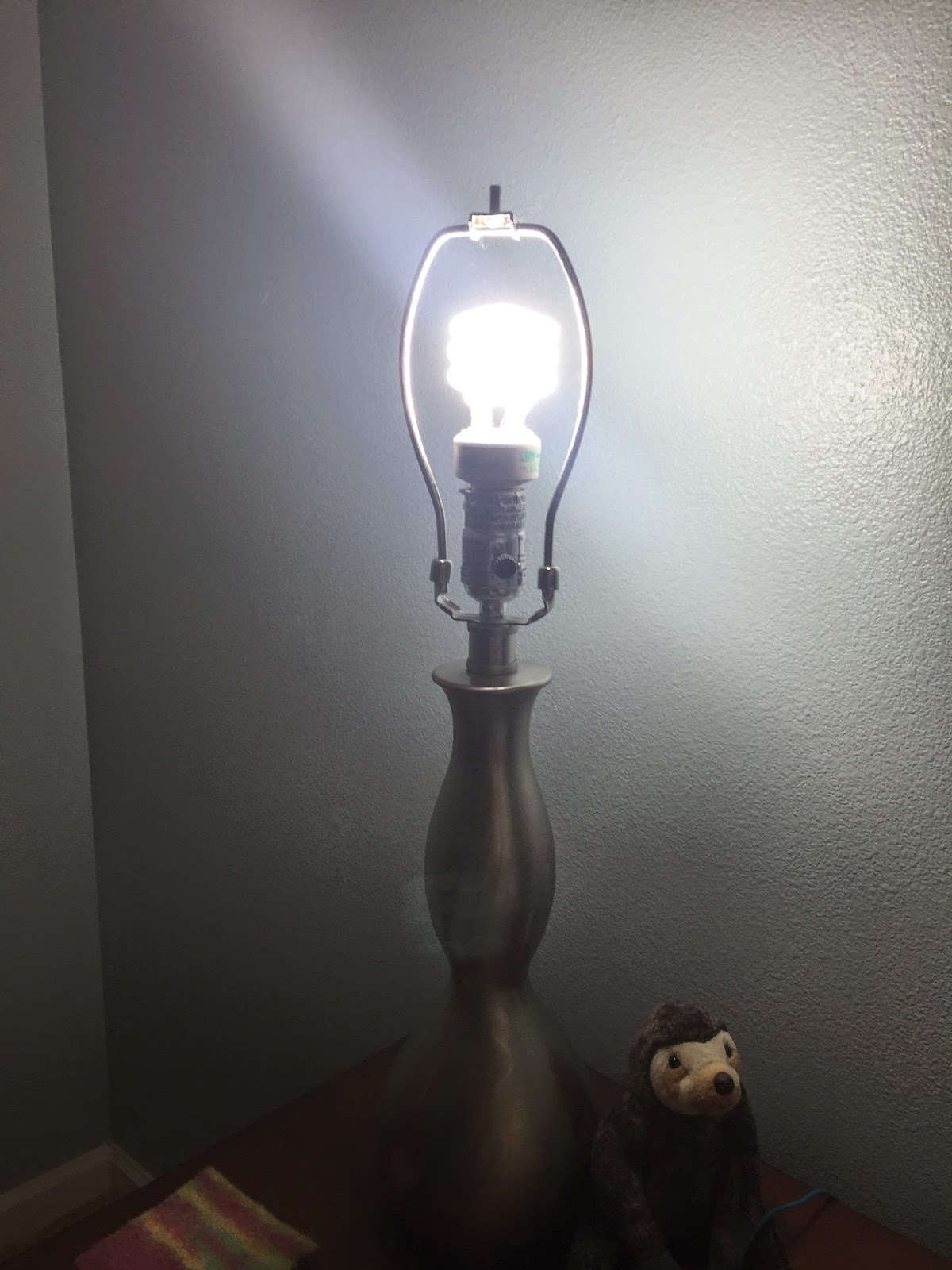 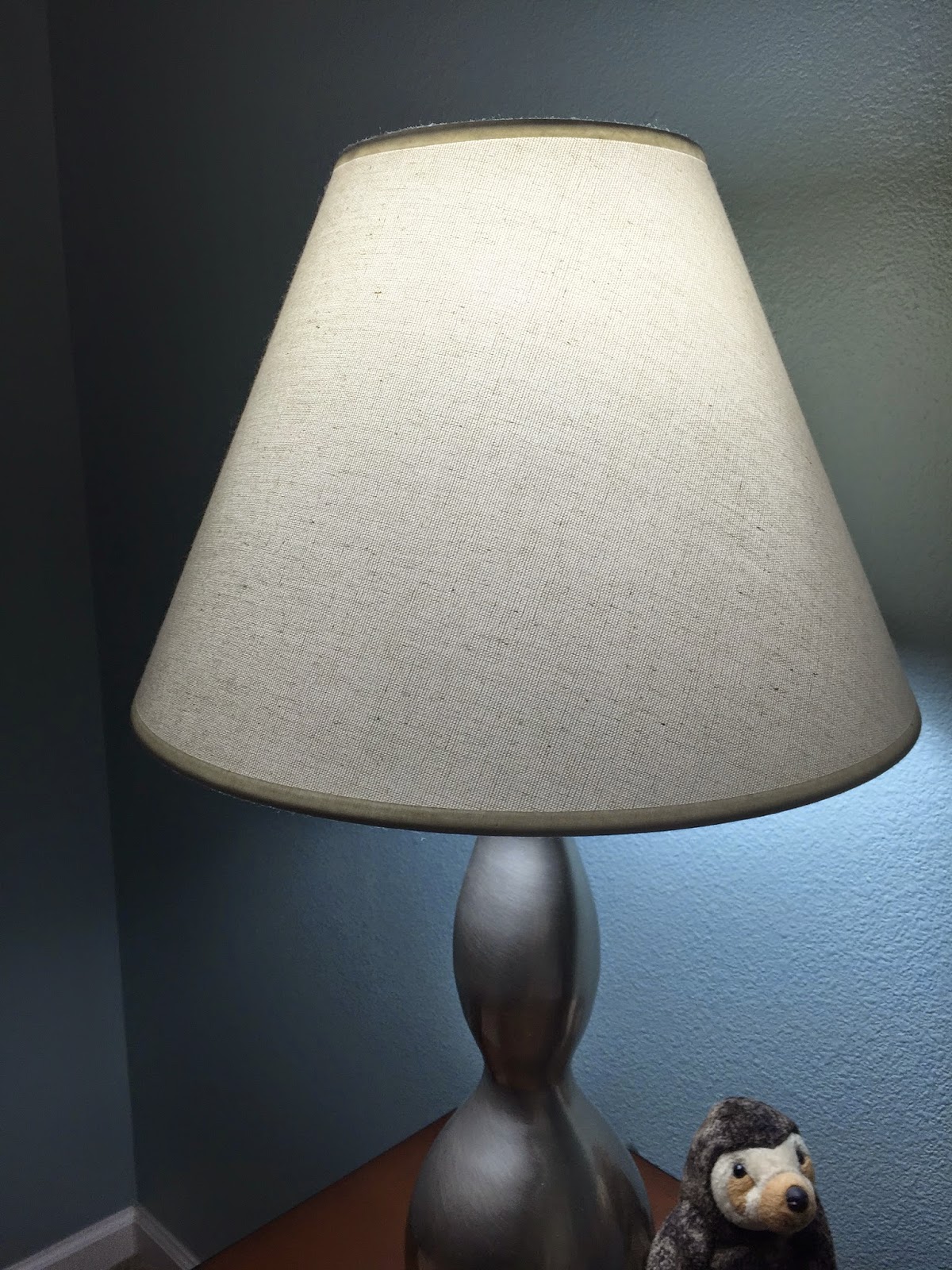 If you're looking at those photos and thinking, "But the first one is so much brighter! It has to be better!", then you haven't been paying attention and need to re-read the chapter on frickin' laser beams. I happen to be a firm believer that making lights brighter and tinier is not the be-all, end-all that the light makers would like you to think. My feeling (backed up by absolutely ZERO research) is that I'd rather have a lot of surface area lit up, and if I have to lose some retina-searing power to get there, I'm OK with that.

The Sombra is just that: More surface area for the light you already have. It's a very simple design, a translucent plastic shade that mounts over your existing taillight to give those around you more to see. I was given a review sample by the kind folk(s) at Sombra (BLOGGER FREE SCHWAG DISCLOSURE!), so I gave it a go on my daily driver.

Here's the titanium test-bed from the side with its normal rear illumination, a Planet Bike SuperFlash: 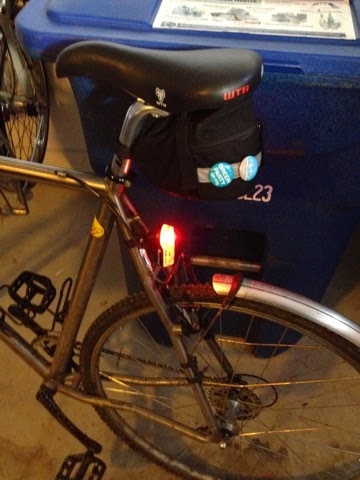 Same thing, with the Sombra installed: 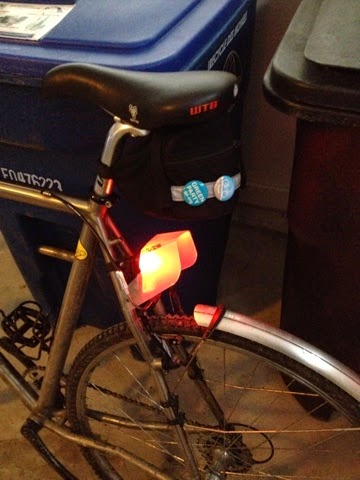 The Sombra folks intend for it to be mounted on the seatpost binder bolt, wrapping over a seatpost-mounted light. However, since my light rides on the seatstay under my saddlebag, I improvised with my rack mounting points instead. The result's pretty much the same. As you can see, the side view doesn't give up much in the way of light intensity, but there's a lot more illuminated area to be seen. Major, major improvement.

So far, I'm on board. But I wish the Sombra folks had gone all-in and figured out a design that has the same effect on the rear view as well. Here's a look at the back of the bike sans Sombra: 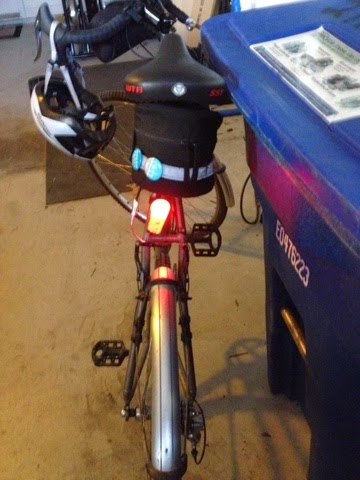 And here it is with the Sombra installed: 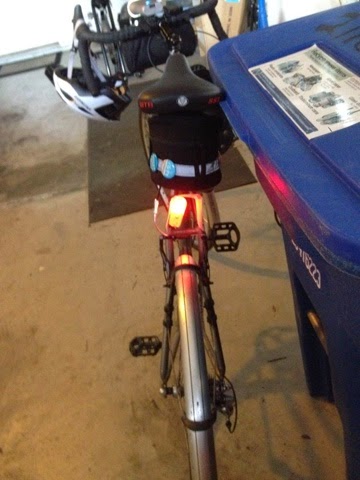 Not a lot of difference, right? In fact, you have to look pretty closely to know that it's there.

I rode my normal commute with the Sombra installed for several weeks, but I can't say if drivers noticed me any more or less. Honestly, the drivers around here are (knock wood) pretty polite folks who don't give me a lot of reason to complain, so it wasn't much of a test. I did find it a bit more challenging to turn my light on and off with the Sombra installed while wearing bulky winter gloves, but not annoyingly so. If any of my regular readers have a commute situation where they think a Sombra might make a bigger difference, I'd be glad to send you the prototype to try in your urban jungle if you promise to report back.

If anything, one of the Sombra's biggest strengths is paradoxically one of its biggest weak points. The thing is so simple, if you have the slightest DIY inclination, you're going to look at it and think, "I'll bet I could make that!" As soon as I started pondering ways to possibly reshape it to improve rear visibility, I realized that with a couple bucks' worth of plastic file folder and some scissors, I could probably hack any number of diffusers in whatever shape or size my twisted little mind could devise. Granted, the same response applies here as to the armchair modern art critic who says "my kid could paint that": Yes, but your kid didn't. The Sombra folks came up with this idea, did the hacking, worked the iterations, and deserve kudos for pushing the bike lighting business in the right direction. If they succeed -- or if the idea catches on -- we'll all be a little safer for it.

So, the verdict, in terrible bicycle magazine bullet point style...

One of the features of this year's Iowa Bike Expo was the Teesdale Handbuilt Bike Awards, named in honor of late Iowa framebuilding legend Tom Teesdale. While I didn't cast a ballot in the People's Choice competition (something about maintaining journalistic integrity or whatnot), I did grab a few photos of custom bikes that caught my eye. 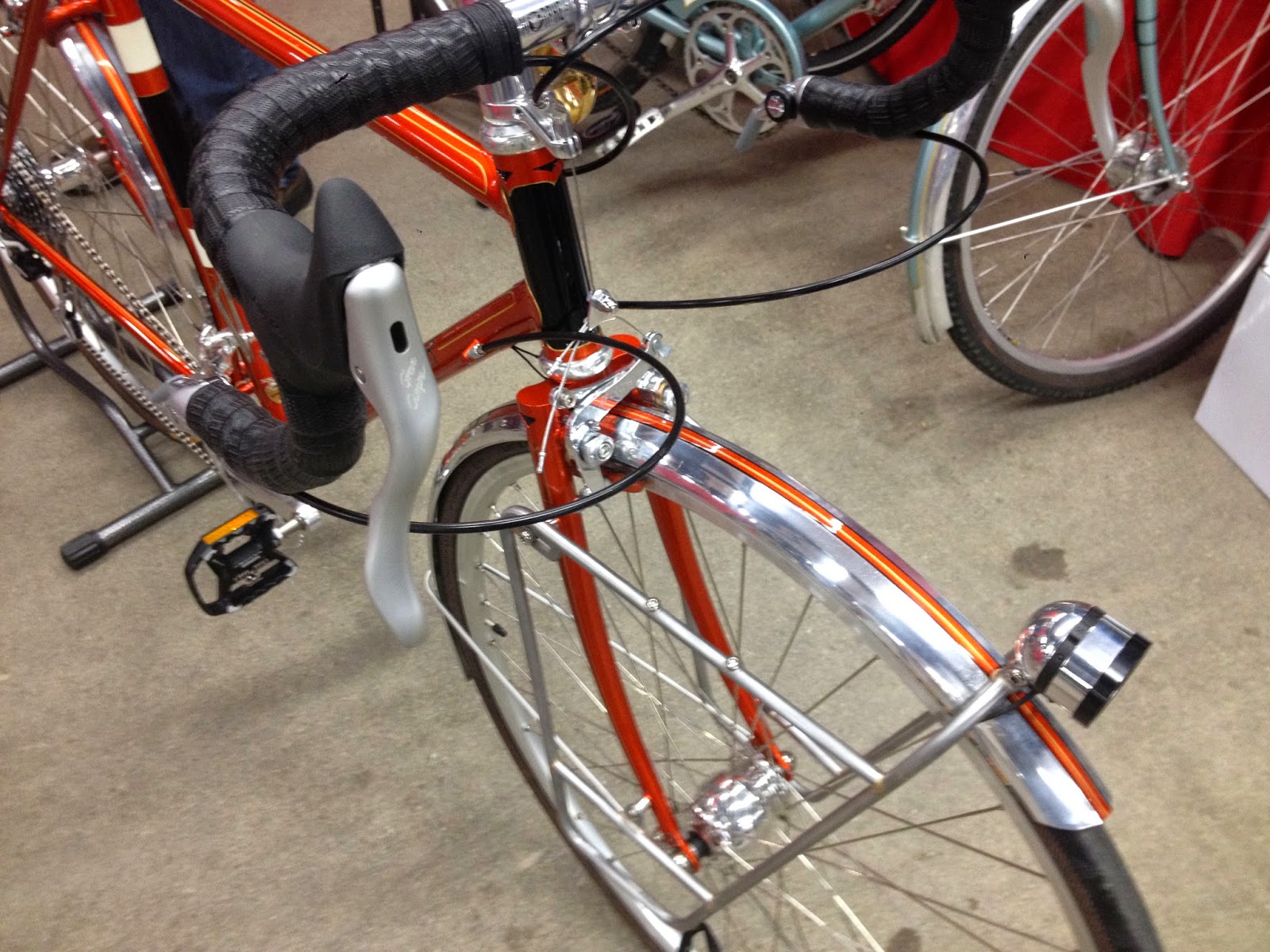 Ames builder Jeffrey Bock brought this jaw-dropper of a touring/randonneur ride. As if the lugs and pinstripes on the frame weren't enough, soak in the matching stripes on the fenders. Classy. 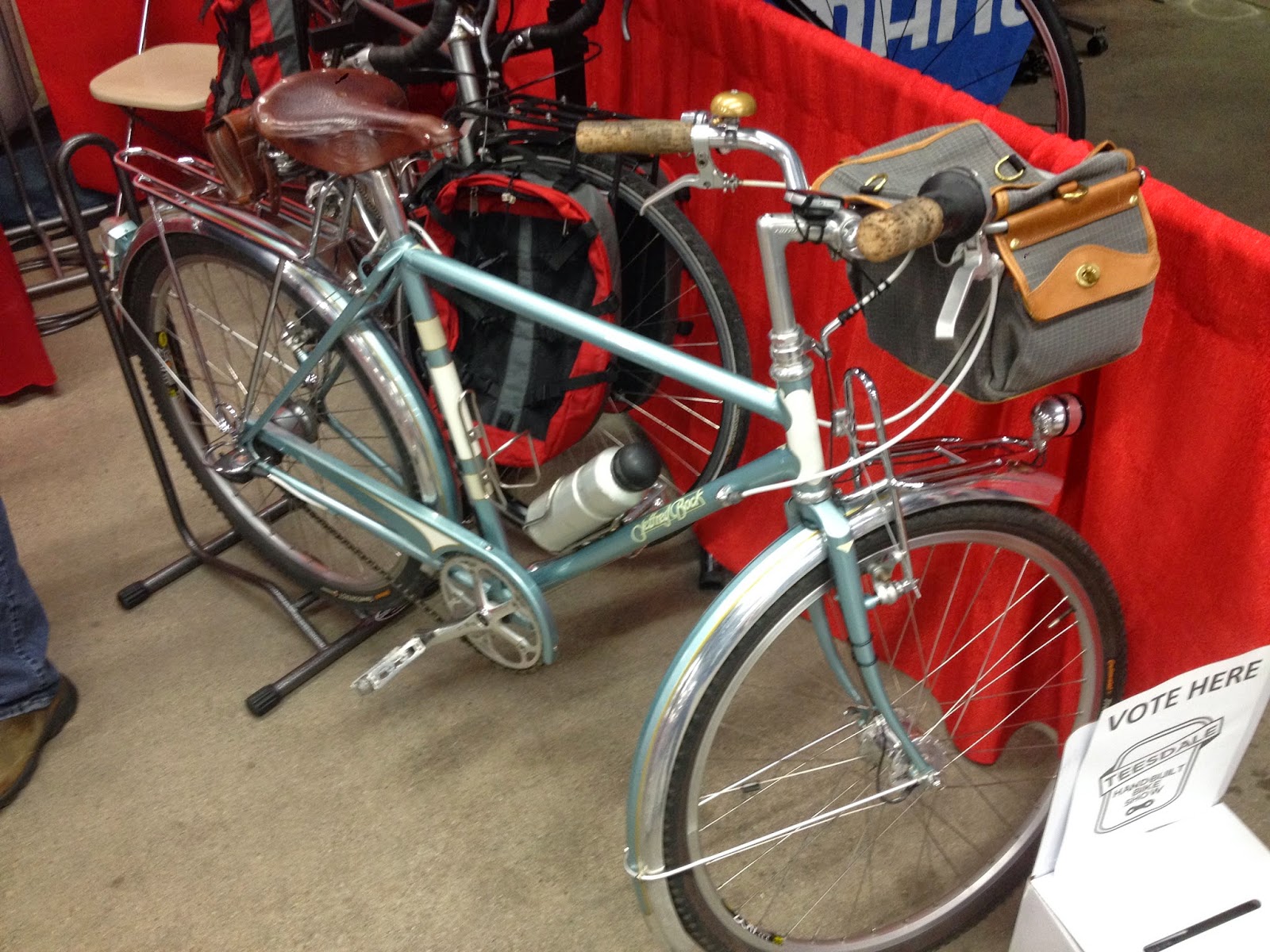 The Bock booth also featured this classic-looking townie with custom racks. Again with the fender stripes! 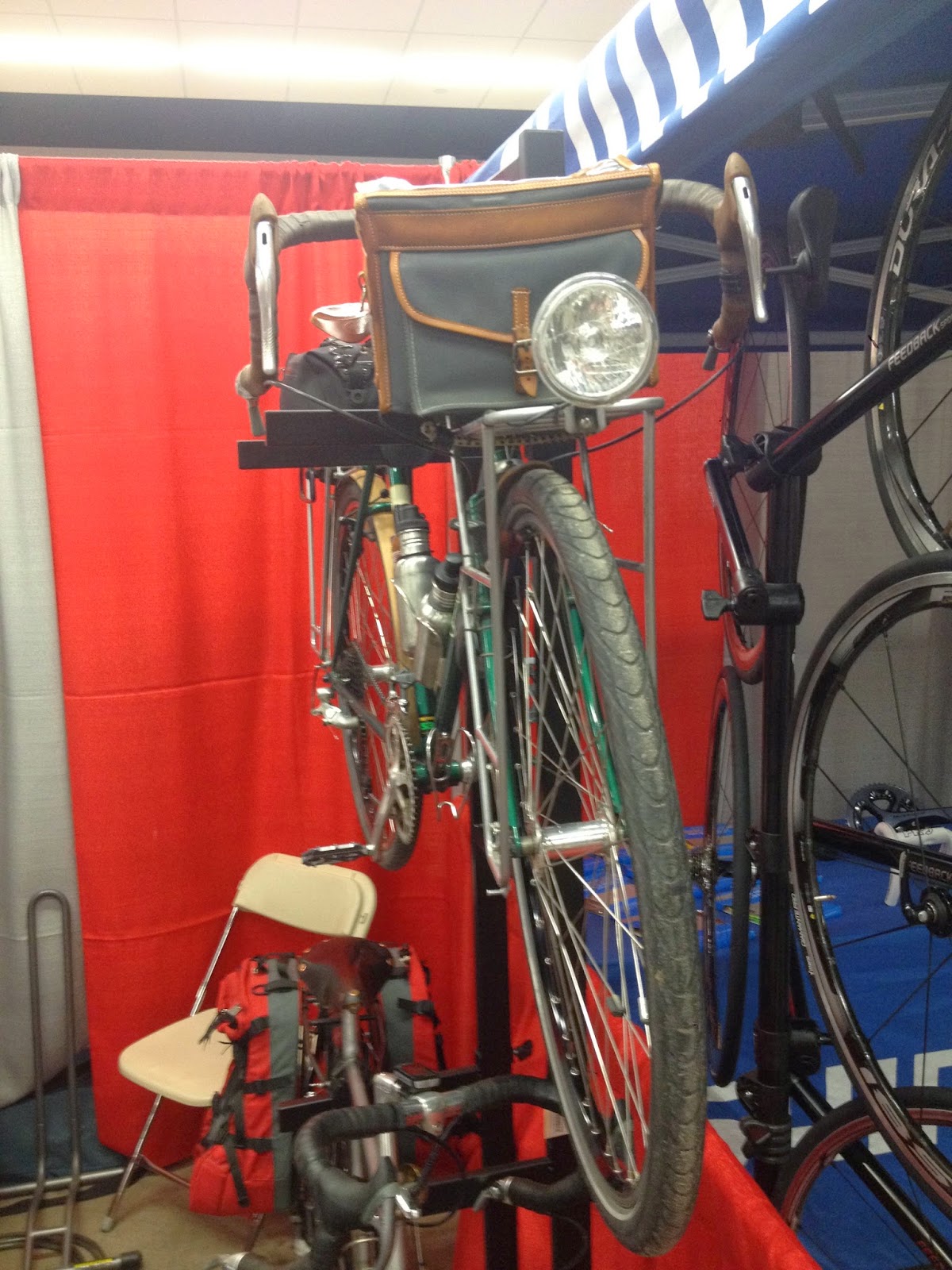 At the risk of offering too much Bock (and being told to get the Bock outta here), the front view of this obviously well-used and loved Bock machine really appeals to me. Something about the big bag, big tire, and big honkin' headlight has a classic motorcycle aesthetic I dig. Remember when Salsa Cycles was one guy and their "If it ain't moto, it's worthless." slogan hadn't been co-opted yet? That's what this shot is to me: Moto, in the original sense. 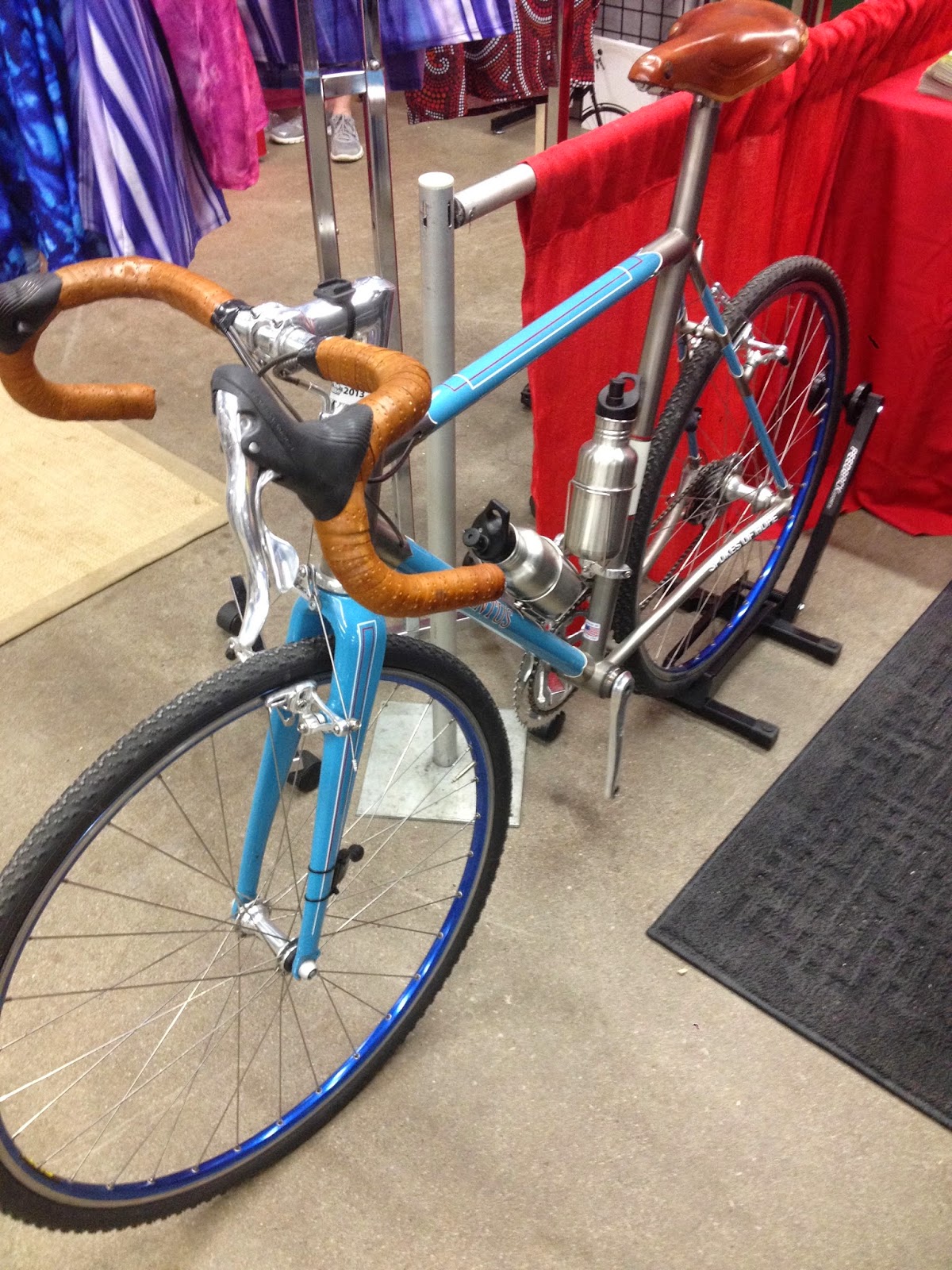 I thought about putting this Ventus in my gravel bike post, but it's pretty enough to hang with the custom peloton instead. Lotsa titanium, lotsa shiny silver parts, and box lining? C'mon. 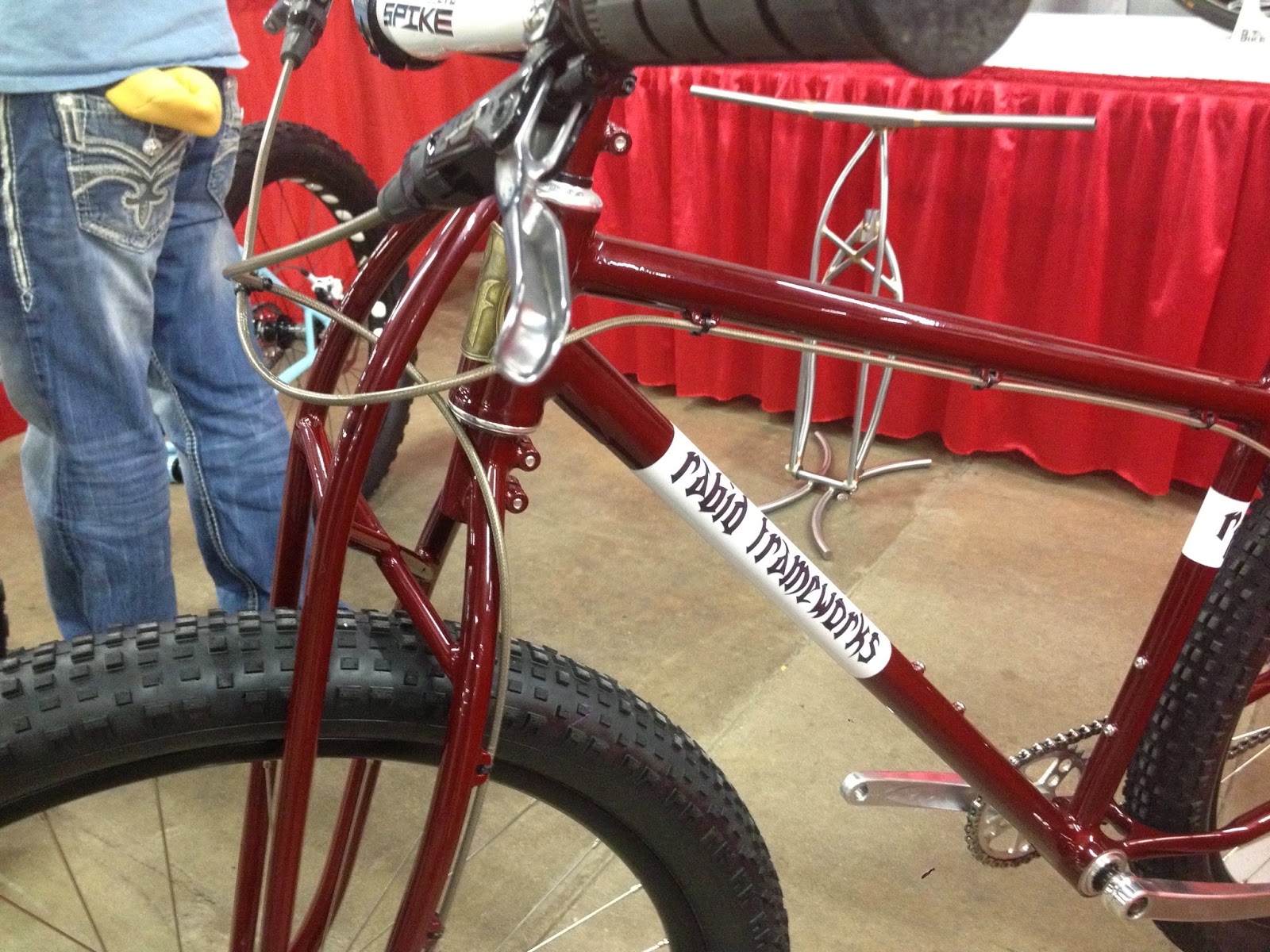 Did I ease you gently enough into fat tires with that Ventus? Then try this Rabid Frameworks on for size. If there's not a little Jeff Jones homage/inspiration/DNA in that truss fork, I'll eat my helmet. 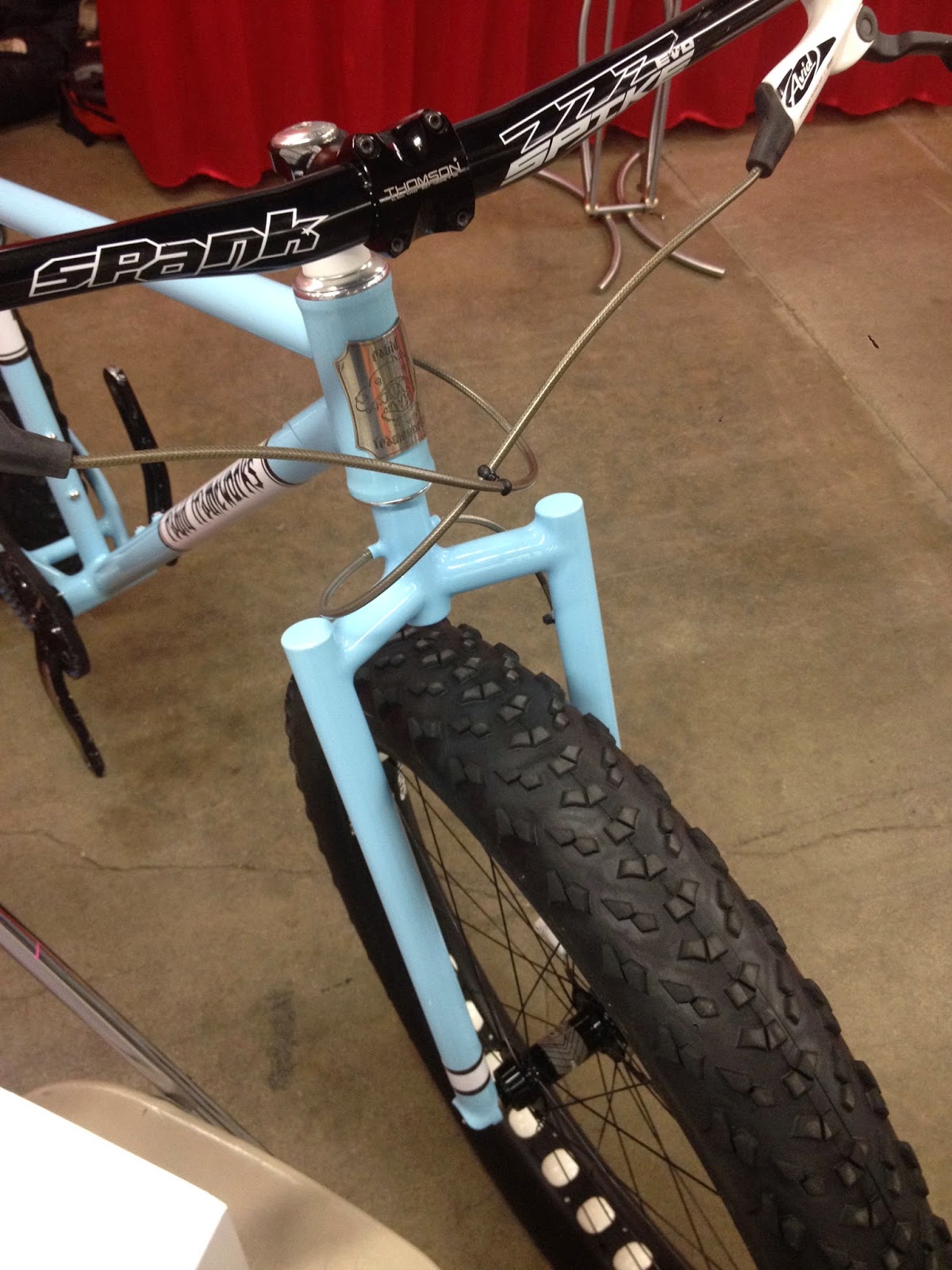 As long as we're going fat, let's go REALLY fat. This Rabid Frameworks chubbie was my "huh?!?" moment of the show. I have no idea why a front brake cable needs/wants to route through an extended lower steerer tube. It creates feelings in me that I myself do not understand. But I like it.

This is just a sampling of the local and semi-local wares on display. Of course, the only online article I can find that looks like it might divulge the winners of the Teesdale prizes is from our terrible local paper The Des Moines Regurtigator, and thus hidden behind 18 levels of firewall protection. So we'll just all have to stay in suspense on that one unless Steve F. actually stayed at the show long enough to find out.

(Aside: Intrepid reporter Steve K. is currently sleeping off the car-lag of his road trip to the North American Handmade Bicycle Show, so if the kind of stuff you see here is your jam, stay tuned. Once he's curated his camera full of -- stunning, I'm sure -- photos, I'll post a link.)
Posted by Jason T. Nunemaker at 1:41 PM 1 comment:

Score One for Homemade Tools and Brute Force!

Had a day to play in the garage and figured it was a good time to swap out the creaky cranks on the Cannondale tandem for some (hopefully) less-creaky cranks (for those who like minutiae, I'm going from the stock Octalink V2 setup -- which has always been a noisy nuisance for me -- back to ye olde fashioned square tapers).

I was able to get an impressive 75% of the old bottom bracket cups out of the frame (a solid C), but the stoker's drive side absolutely refused to budge. Poured some oil in from the non-drive side, let it seep in (and out the other side onto the garage floor, sorry dear), nothing. And yes, smarty-pants, I know that the drive side bottom bracket cup is left-hand threaded.

I was up against two problems: One, I needed to apply approximately 1.3 metric crap-tons more leverage, and two, I needed a way to make sure that the bottom bracket tool didn't pop off the cup during the application of said leverage. Being unable to plan ahead for my blog posts, I addressed the second problem first: 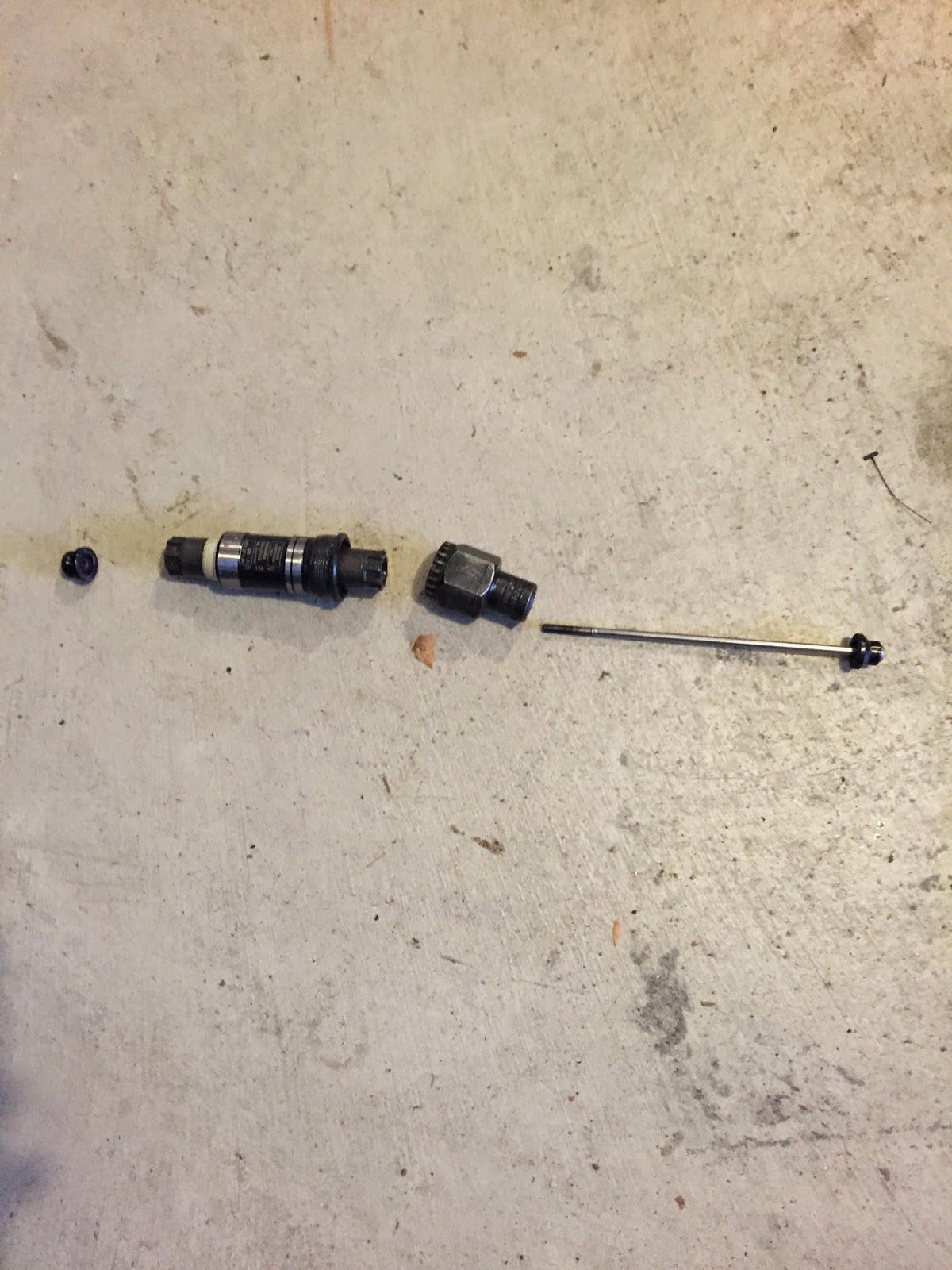 There's the offending bottom bracket (for ease of viewing, shown -- SPOILER ALERT!! -- after it had already succumbed to my greater intellect and been liberated from the bike), the bottom bracket tool, and a rear skewer. You could just as easily use a quick-release, but I went with what was handy. Put 'em all together, and you get this: 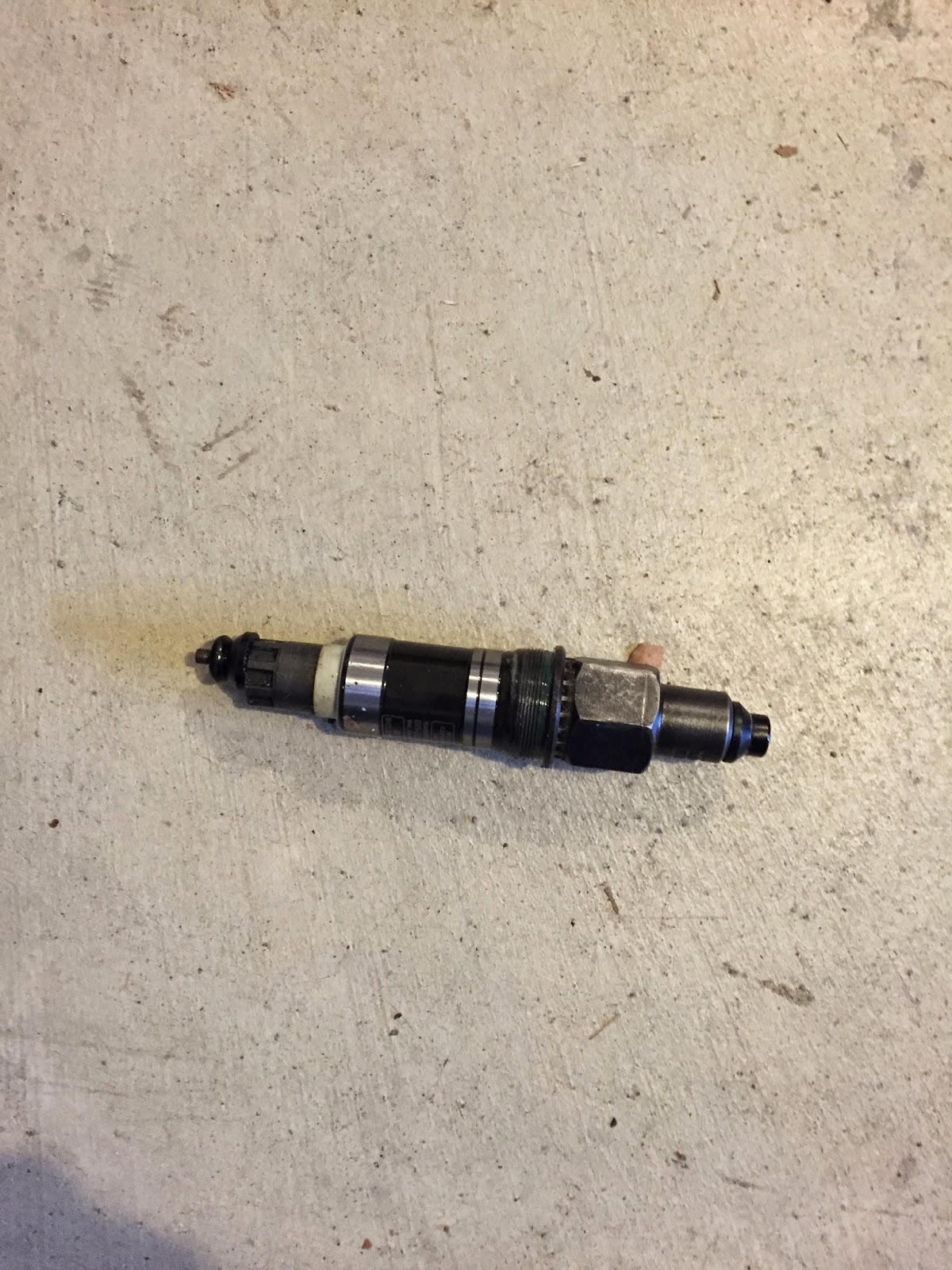 Ain't no way, no how that tool's popping off now. So all we need is approximately 1.3 metric crap-tons of leverage, which comes courtesy of the Cylindrical Leverage-Enhancing Tool Utilization System (CLETUS): 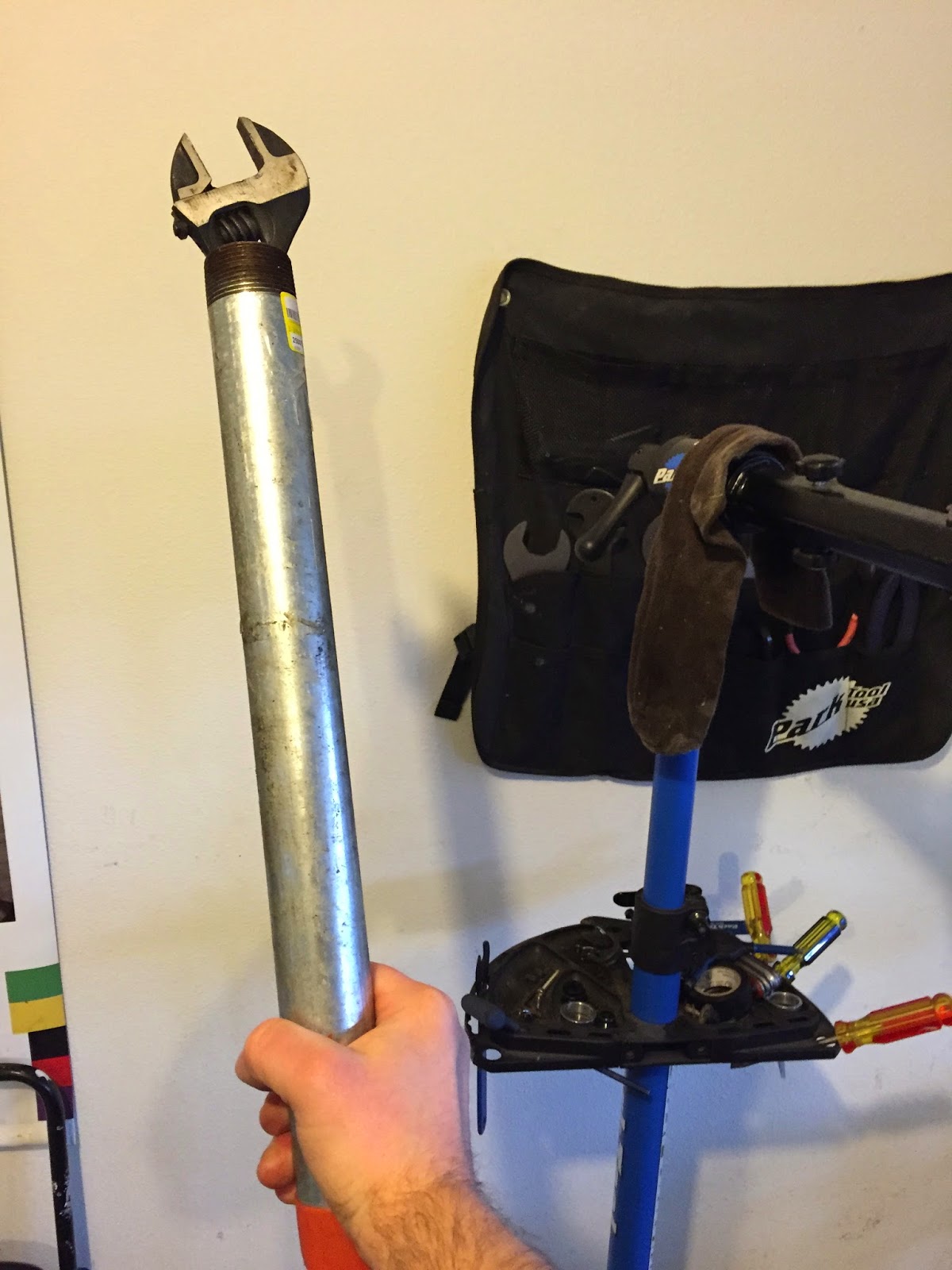 The CLETUS is available in a wide variety of lengths specifically calibrated to deliver the exact metric crap-tonnage of force needed for precise extraction. I selected the 609.6mm model, affixed it to my wrench, grasped it with the opposable thumb shown, applied force with the hairy Neanderthal forearm shown, and proceeded to remove that cup like nobody's business. Then this happened:

Returning to the theme of "neat local shops at the Expo", here's a look at another unique-to-Des Moines purveyor of bikes (and in this never-humble blogger's opinion, owner of the best logo in town), Beaverdale Bicycles: 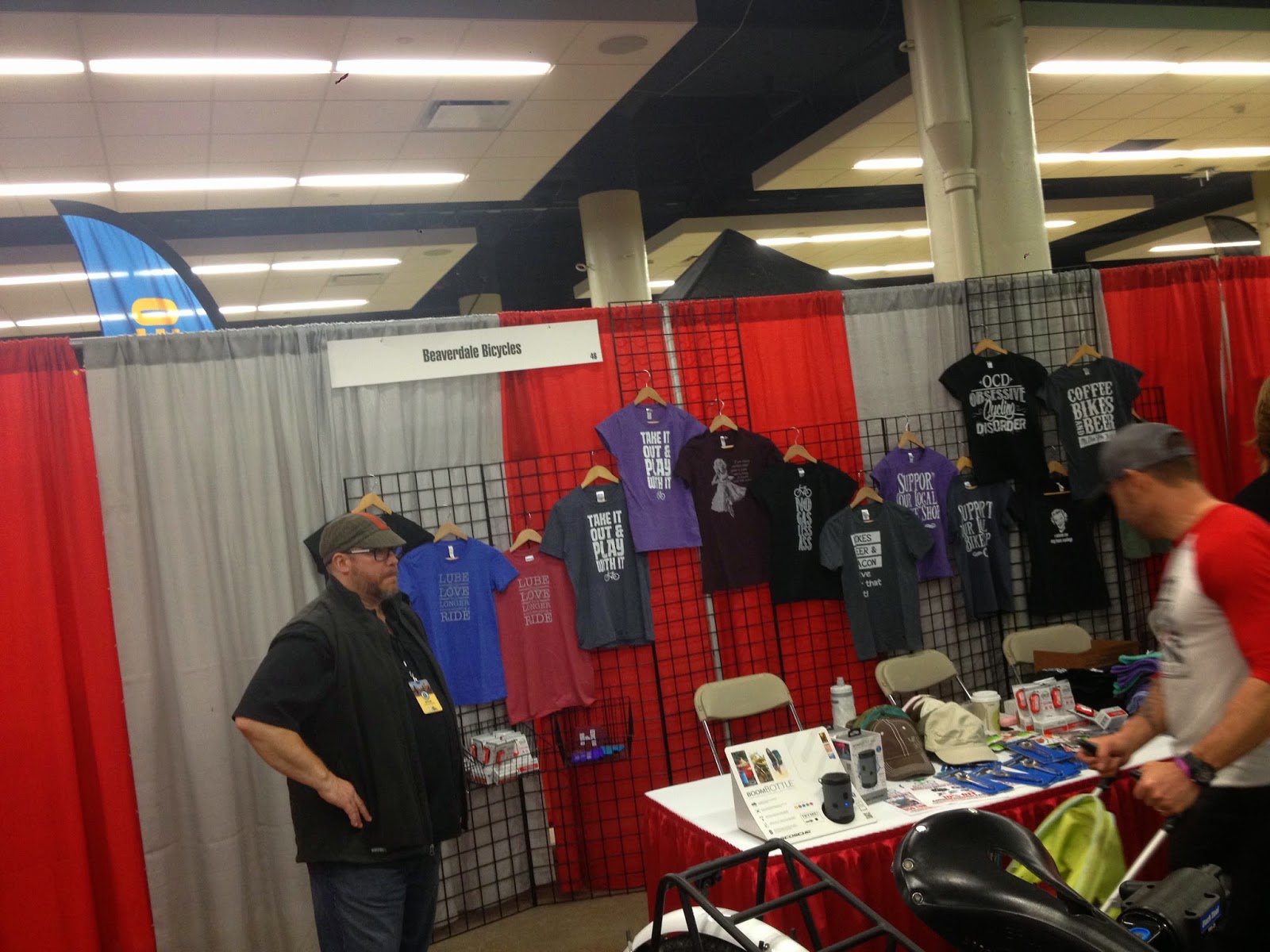 BB's been closely affiliated with a t-shirt shop from the get-go (they used to share a building), so they always have an array of unique and funny bike-themed Ts. I believe that's proprietor Ed Veak manning the booth and the Wall of Shirts. 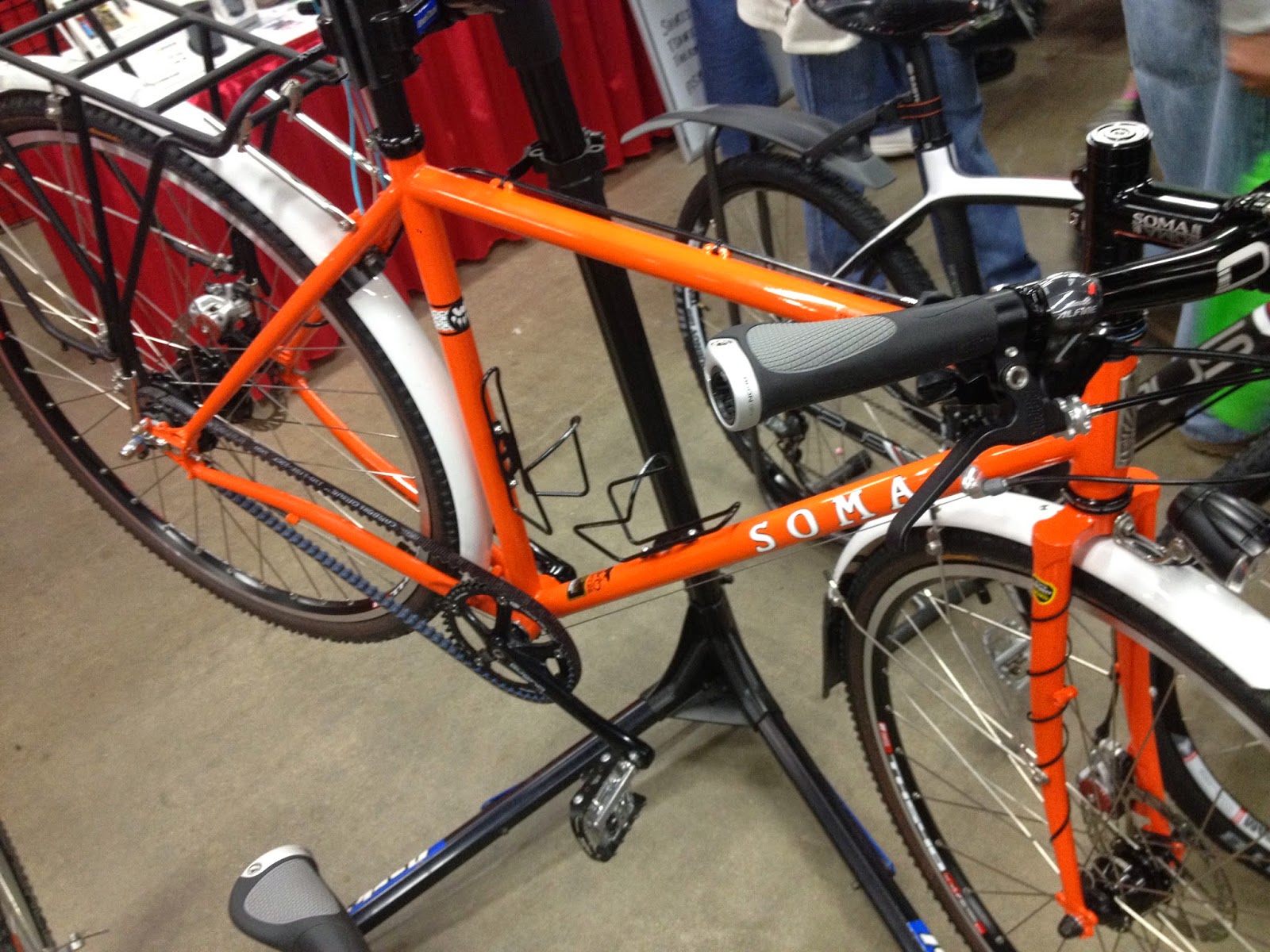 They also carry a pretty eclectic family of bike brands and accessories, catering to the everyday cyclist/oddball. That's a Soma Wolverine in drool-inducing orange, fully fendered and lighted for commuting with a belt drive to boot. 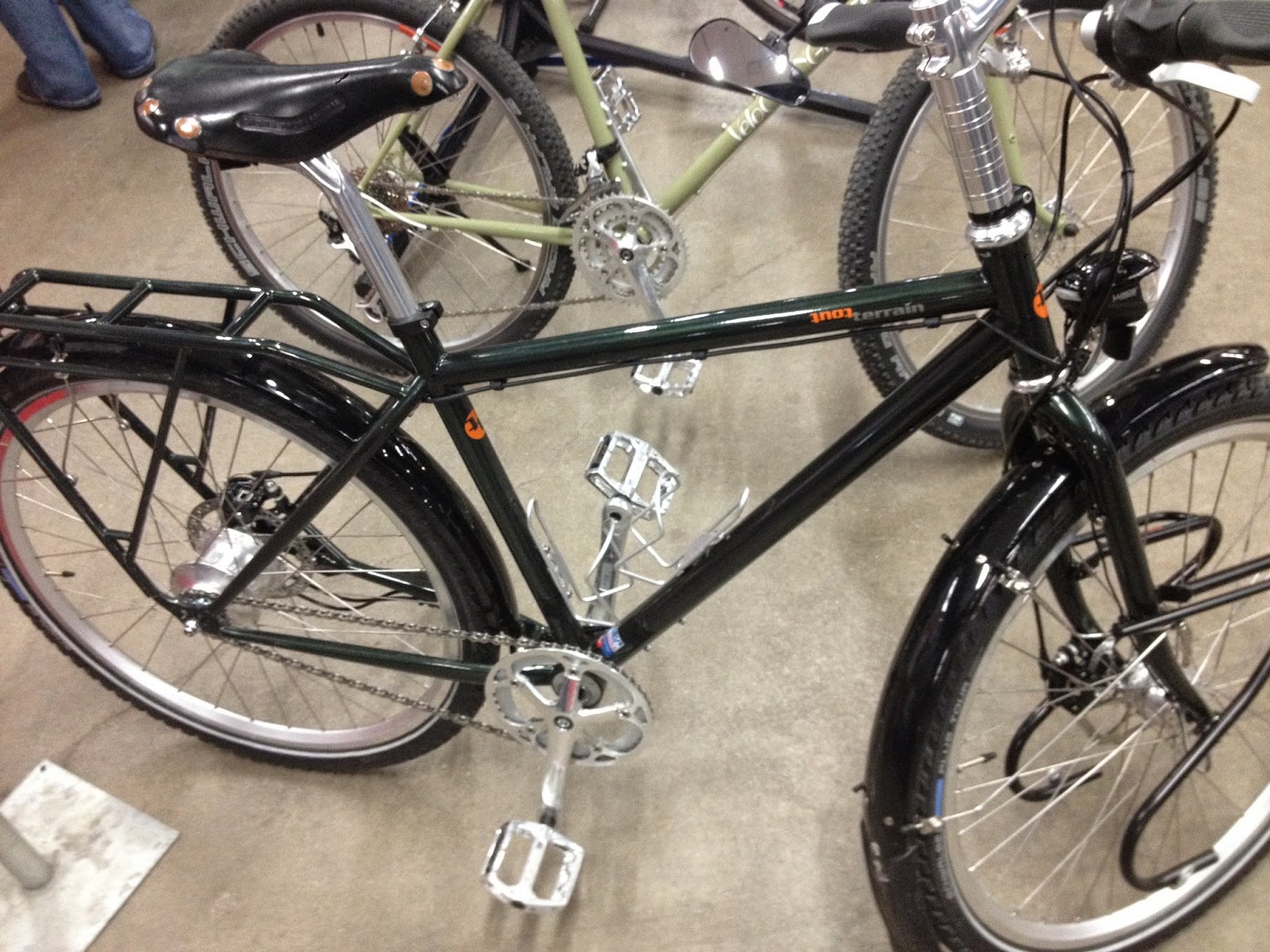 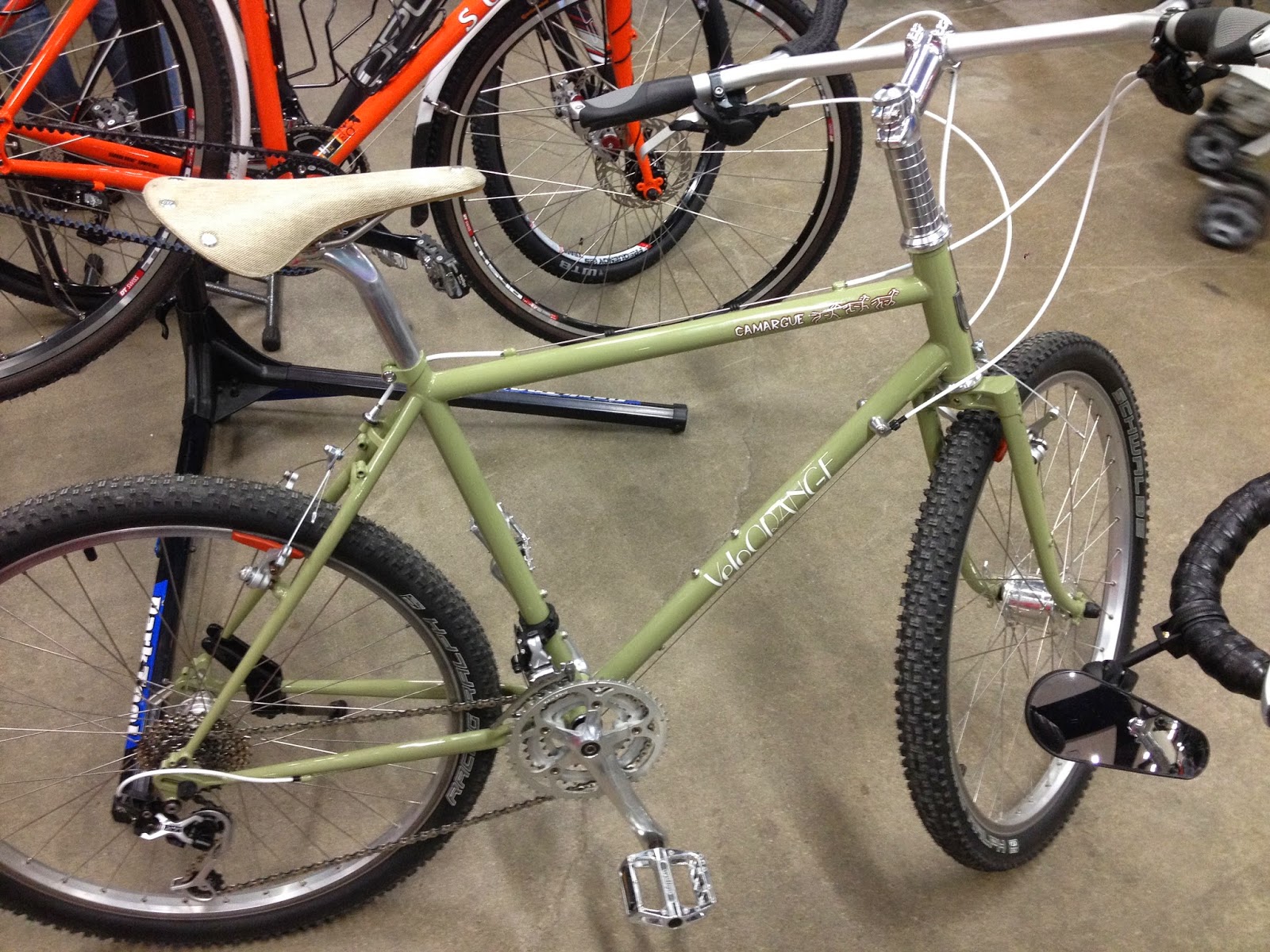 Velo Orange calls their Carmague a touring frame for unpaved roads, but this one looks to be built up nuovo-retro-mountain-bike style akin to my mental project around a Long Haul Trucker. (Notice that all the bikes have uncut steerer tubes with massive spacer stacks, which looks kinda weird from a "show bike" perspective but is a lot more sensible than cutting them down and limiting the customer's choices later.)

Hard to tell from my always-lousy photos, but the telltale fat front hubs on all these bikes point out another of Beaverdale's specialties/niches: Dynamo hub-powered lighting. Not something your humble narrator is really into, but I'm glad we have a shop in town that is. In fact, Beaverdale Bikes (and Ichi Bikes, detailed in a previous Expo post) are two of my favorite places in all of Des Moines bikery for that very reason: Both are different. A Trek store? That's the Wal-Mart of cycling: There's one in every town, selling the same stuff. But Ichi and Beaverdale (and the Des Moines Bike Collective, which I need to detail in a post someday) are uniquely ours, actual local bike shops.

Huh, how did that soapbox get under there? Guess I should step off it...
Posted by Jason T. Nunemaker at 9:36 PM No comments: