He followed me home, so I'm keeping him! 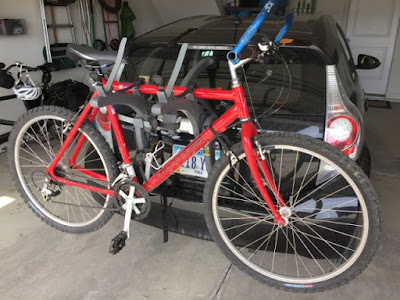 Yes, another midrange mountain bike from the days before my hairline became a peninsula, then a snow-dusted island. Yawn if you must, but old mountain bikes are a crazy value on the secondhand market these days. I've now scored two quality examples of these super-versatile bikes at less-than-department-store-crap prices.

I'm a softie for old Cannondales. My late-dad was obsessed with the brand, and that obsession imprinted on me early. When I later worked in a shop just down the road from their Bedford factory and got the opportunity to take a tour, it was like a pilgrimage to Nerd Mecca. How I came out of that tour without ordering a bike (or several bikes) is beyond me.

These days, that soft spot has manifested itself in a couple Cannondale tandems (probably the best tandem frame ever made by a non-tandem-specialist), a 90s-era hybrid piloted by the tandem's stoker when she's tired of looking at the back of my homely head, and now Big Red shown above.

I'm undecided as to what role Red will fill in the fleet (alongside my similar-vintage Rockhopper) as of yet. For now, I'm just going to tune it up and ride it as-is. I suspect that whichever frame offers a nicer fit/feel will get the nicer parts kit and drop-bar conversion currently on the Rocky, while the leftover parts will turn the less-preferred frame into a beater/townie/cruiser/backup/winter bike.
Posted by Jason T. Nunemaker at 10:00 AM No comments:

Continuing my critically-unknown series on the bikes of Des Moines sporting 26" wheels (the One True Size), an anecdote:

Went out for an evening ride last week, hoping to convince Spring that yes, it's time to arrive. I wend my way through downtown Des Moines, headed east, and find myself stopped at a light. I think I can sense another rider behind me, but I'm giving car-based traffic the stink-eye, so I don't want to look back (and I haven't rocked a mirror in years -- there are even limits to MY nerdliness).

Rider behind me announces himself with the following compliment: "Nice bar-ends!"

Huh? For a minute, I think he's jerking my chain (metaphorically speaking), since my default mode is sarcasm. But I say "thanks" as the light changes and ride on.

Within the next block, he puts the drop on my laughably slow and corpulent self, and I see the reason for the compliment: He's on a 90s-era Trek mountain bike, rocking (of course) 26" wheels, converted to drop bars, shifted with some gloriously old-school Suntour retrofriction bar-ends. Even had a vintage suspension fork and what appeared to be original 747 SPDs. This was clearly one of my people!