I was stopped at a light on yesterday's commute home, taking the lane to keep cars from sneaking around me and turning across my path, when the car behind me skulked up on my right to make a right turn. The driver stopped and rolled down his window.

Maybe I'm paranoid, but my first thought was, "Hoo boy, here we go." When it's this cold and miserable out, I just assume that anyone who breaks the seal on his (and it's always "his") climate-controlled coffin is a) plenty mad about something, and b) committed enough to that anger to freeze just so he can launch it at me.

Then, I saw his roof rack. Now, a pricy bike-schlepper doesn't always mean a "get out of hostility free" card. I've been cut off by more than my share of unfortunate bikes that just happen to have a giant, gas-guzzling parasite stuck under their tires. But in this case, I was in fact dealing with a friendly fellow bike-person.

"Is that a singlespeed?"

"Yup." As much as I love semantics, it was too damn cold to launch into the explanation that it's actually a fixed-gear. After all, it does have just one speed, unless you count walking.

Maybe it's lame to take your warm fuzzies from random strangers, but that little "wow" made me feel like the World's Biggest Bad-arse for the rest of the night. It almost makes up for the half hour I just spent on the gerbil-wheel in the basement.
Posted by Jason T. Nunemaker at 3:03 PM 3 comments:

Please Remind Me That I Chose This

I had two brand-spankin'-new, utterly useless degrees in hand and a wife ready to quit her miserable job. I could have taken those hunks of embossed toilet paper ANYWHERE in the world and received the same pittance of a salary.

I chose Des Moines, IA. The same freaking climate as:
In short, after spending a huge chunk of my young life in crappy Midwestern winters, I chose to stay in the Midwest.

I have no idea. But I'm taking suggestions for where I might take those useless degrees next. Requirements include:
Kansas City (either the KS or MO variety) seems to have potential. Maybe St. Louis, MO? No experience there, though bike-pals say it meets the climate requirement.

So, what say you, devoted readership of three people? Where's the next move?
Posted by Jason T. Nunemaker at 5:42 PM 2 comments:

Editor's Note: Just finished shoveling my sidewalks in -5F temps with -25F wind chills... which means no real ride report today. However, the frozen claws that now pass for my hands can still cut and paste. So, I'm digging back into the archives of the Internet-BOB mailing list (a.k.a. iBOB) for a climate-appropriate ride report I wrote many moons ago. I'm exceptionally proud of the uber-nerdy Taun-taun reference in paragraph six -- which, had I written one more draft, would have featured the punchline, "And I thought Jason smelled bad on the outside!" For non-locals, BRR is the Bike Ride to Rippey, an annual 23-miler from Perry, IA to (logically enough) Rippey, IA and back. The catch? It's in Februrary. So, set the wayback machine to February 2004 and enjoy!

Riding in the Deep Freeze

For those still anxiously awaiting pictures of my winter ride, sorry. It's six freakin' degrees out there (yep, that's Farenheit, folks) with wind chills around 20 below. And the five inches of powder that hit us last night are now blowing sideways. I'm not even going to the garage on a night like this, much less taking the time to pose my trusty steed in front of the garage door as required by the Universal Law of Amateur Bicycle Photography.

The bike itself is decidedly normal, just my Redline fixed-gear with studded tires and a few other commuter tweaks. The saddlebag's gone to make room for another rear blinker, and I've added one LED headlight to my bars, another to my helmet. I considered lowering my usual 38x15 gearing by liberating a 34-tooth ring from another bike, but it just hasn't seemed worth the hassle so far. Just add a slathering of wet lube to the chain, and off we go!

Until today, the riding was great. There's nothing quite like the mental disconnect of actually seeking out glare ice because your tires hook up to it better than they do on snow. On a local trail, a guy going the opposite direction warned me that I was headed for an icy stretch where he'd just gone down -- um, genius, what exactly did you expect on 700x23 slicks? I took great pleasure in rolling right across the 100-or-so yards of ice sheet with nary a slip.

Note, however, that I said "until today." I don't care what tires you're running, five inches of unplowed, fluffy powder is ugly. And Iowa drivers (bless 'em!) act like they were born and raised in the tropics every time it snows, whether it's the first one in November or the last straggler in late March: "What is this strange white substance that falls from the sky? Perhaps I should jam on my brakes or swerve -- or maybe both -- to get a better look at it!" C'mon, folks... aren't you FROM here? Snow was not invented yesterday!
Posted by Jason T. Nunemaker at 6:58 PM 1 comment: 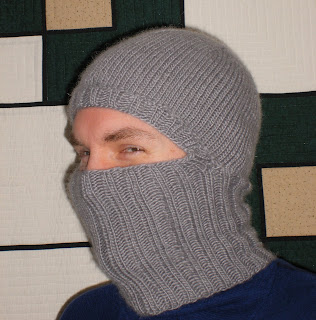 I'm past due in reporting on Week 1 of Snowbike Follies, but until I have some photos of the trusty steed to share (per the request of iBOB-pal Scott), this will just have to do.

I'm lucky enough to be married to someone who's as nuts about knitting as I am about bikes. It's like living with a giant spider: sit still long enough, and she'll probably knit you to the couch. So, when I mentioned that I was going to start riding again, and gosh, it would be so nice to have a wooly head-and-face protector, she went straight to work. The pattern (available for free all over the Web, apparently) is called a "helmet liner" -- designed in most cases to be made for troops serving in chilly climes. Mix that with some wool/mohair blend yarn and the abovementioned knit-nut, and you've got the oh-so-fashionable "cyclist preparing to rob a convenience store" look shown above. 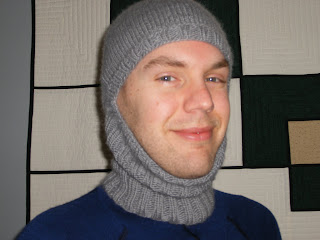 When I need a little more airflow, I shift to this look: "cyclist auditioning for a part in a local production of Monty Python and the Holy Grail" (insert your own coconut clip-clop sounds here).

So far, this melon-insulator has been perfect for the oh-so-brisk 15-25F temps of Iowa in January: toasty without being clammy, fast to dry, and nowhere near as stinky as the synthetic balaclava it replaced (unless the smell of wet wool isn't too your liking).
Posted by Jason T. Nunemaker at 7:33 PM 3 comments:

After one month split between the bus and carpooling, I couldn't take it any more. My mind and my legs were turning to Cream of Wheat. So I called up the lovably cantankerous (or is it cantankerously lovable?) Peter White of the eponymous Peter White Cycles and ordered up a set of Nokian studded winter tires. As of tomorrow, I'm back to my old, mildly deranged ways, terrorizing the streets of Des Moines on rubber that looks like something out of Mad Max.

Now where did I put the battery charger for my lights?
Posted by Jason T. Nunemaker at 7:37 PM 3 comments:

Something Bike-Related? Okay, if You Insist

660 of those miles happened before I fell down and went boom in May.

The remaining 1,390 are currently under investigation by the UCI and the French press (mmm... French press... dark roast... crap, I just drooled in my keyboard), who suspect that I was unfairly assisted by the new titanium femur. I strongly deny these allegations, and have been peeing in a cup non-stop in the hopes of clearing my besmirched name.

When asked for comment, my wife said, "I wish he would just go back to peeing in the toilet and stop besmirching all our cups."
Posted by Jason T. Nunemaker at 6:51 PM No comments:

Live from the No-Caucus Bunker

That's right, folks, as promised, I'm hunkered down in my panic room, all deadbolts locked, with a six-month supply of Spam, waiting out the Caucus Carnivale. Ring that doorbell all you want, earnest collegiate campaign volunteers! I ain't comin' out until the satellite trucks cross the New Hampshire state line!

Here's a news flash, in case you missed it on CBS, ABC, NBC, or the relentless CNN Headline News crawler: It's cold in Iowa in January. Huh. Guess when I was learning to write, I never took "Fundamentals of the Painfully Obvious Lede." Of course, it's better when you deliver it with a little drama. Hire a timpani player for some stock "breaking story" background music, and try this: "On a cold January night in Iowa, history is in the making." Just like that, you've got the Official Cliche of the Caucus. Sure, everyone's been playing around with the "history is in the making" part, but you can't spit around here without hitting a national news figure who's opening his/her story with, "On a cold January night in Iowa."

My other favorite media moment happened earlier this week: We finally reached the point where news reporters outnumbered news stories. So, obviously, the extra news reporters had to start reporting on the other news reporters. Local affiliates aiming cameras at their national counterparts! National networks aiming cameras at other national networks! Reporters interviewing each other about the reporters that they interviewed yesterday! "Charlie Gibson ate a tuna sandwich for lunch today! How will this impact Iowa caucus-goers?" "Well, Tom, you may remember that in 2004, Dan Rather went with egg salad for his caucus-day lunch, and it really seemed to energize Howard Dean's supporters. I think Gibson's tuna could be the turning point for the Obama campaign."